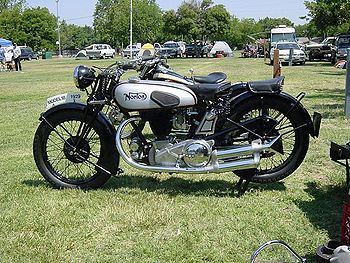 The over head valve Norton Model 18 was first seen in 1922. The new model retained the 79mm x 100mm bore and stroke that was already synonymous with the Norton marques 500cc models with the over head valve top end being fitted to the well developed Norton bottom end that was already serving the 16H admirably. Much of the development work on the new engine was carried out at Brooklands where it established a new world record for a 500cc class machine covering a kilometre at 89.22 mph. For the rest of the 1920's the Model 18 provided the basis for many of Norton's competition successes. However by the end of the decade, it, together with the rest of the Norton range were beginning to look dated, despite the adoption of saddle tanks in 1929.

Edgar Franks revised the side and over head valve machines for the 1931 season, the magneto moved to a location behind the cylinder and dry sump lubrication was adopted. A shorter twin rear stay frame was adopted by all the models except the ES2 and over head cam models.