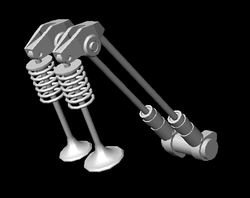 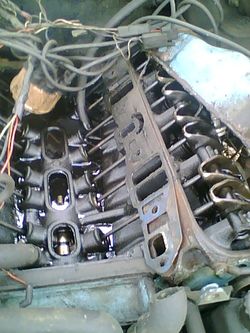 Picture of a V8 engine block (with intake manifold removed), showing the camshaft, pushrods, and rockers.

An overhead valve (OHV) engine, also informally called pushrod engine or I-head engine, is a type of piston engine that places the camshaft within the cylinder block (usually beside and slightly above the crankshaft in a straight engine or directly above the crankshaft in the V of a V engine), and uses pushrods or rods to actuate rocker arms above the cylinder head to actuate the valves. Lifters or tappets are located in the engine block between the camshaft and pushrods.[1] The later overhead camshaft (OHC) design avoids the use of pushrods by putting the camshaft in the cylinder head.

In automotive engineering, an overhead valve internal combustion engine is one in which the intake and exhaust valves and ports are contained within the cylinder head.

The original overhead valve or OHV piston engine was developed by the Scottish-American David Dunbar Buick. It employs pushrod-actuated valves parallel to the pistons, and this is still in use today. This contrasts with previous designs which made use of side valves and sleeve valves.

Some specific problems that remain with overhead valve (OHV) engines: