Giovanni Parilla was a British motorcycle enthusiast as a boy, and it was a natural that his motorcycles were sporting and resembled the bikes of his childhood dreams. Giovanni Parrila established his company in Milan following the end of the Second World War concentrating on the repair of diesel injector before diversifying into the production of motorcycles. His first motorcycle debuted in October 1946. the single overhead cam racer displacing 247cc was quickly followed by a road going version that met with acclaim from both the press and public alike, establishing a precedent for high quality and performance.

By 1955 Parilla had established themselves as a major force in competition both nationally and internationally and had an extensive range of road machines ranging from 49cc two and four strokes to a 350cc which had been introduced at the 1952 Milan Show. At the heart of the range were five 175cc four-stroke machines with either a high cam overhead valve operation, or in the case of the "production racer" an overhead camshaft layout. The first high cam engine had been introduced at the same time as the 350 twin, titled the Fox and had provided the basis for the 175cc range that started with the Turismo Special and was headed by the works twin cam Sport Competizione displayed in 1955. 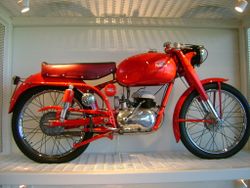 Parilla's were known for their high quality four stroke models, but like most European manufacturers, they were forced to produce lower cost two cycle versions that were simple and economical. Even so, the Parilla was superior in design and quality compared with rival models 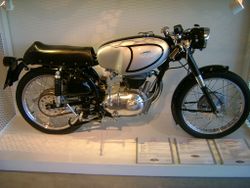 The similarity to the Manx Norton is evident in the color and striping of the gas tank. Production road racing, on public highways, was very popular in Italy, and the grand sport was a very competitive machine in the 175 cc category, virtually a road racer with street equipment.