Power was moderated via the Automatic, centrifugal dry clutch.

It came with a 2 x 120/70 -12 front tire and a 140/70 -12 rear tire. Stopping was achieved via 2x 240mm discs, One disc brake per wheel, c 2 piston caliper in the front and a Single 240mm disc in the rear. The front suspension was a Articulated quadrilateral consisting of four aluminum arms sustaining two steering tubes, and pull rod suspension geometry with offset wheel axle while the rear was equipped with a Double dual action hydraulic shock absorber with adjustable spring preload. The MP3300LT was fitted with a 12 Liters / 3.2 gal fuel tank. The wheelbase was 1550 mm / 61.0 in. long. 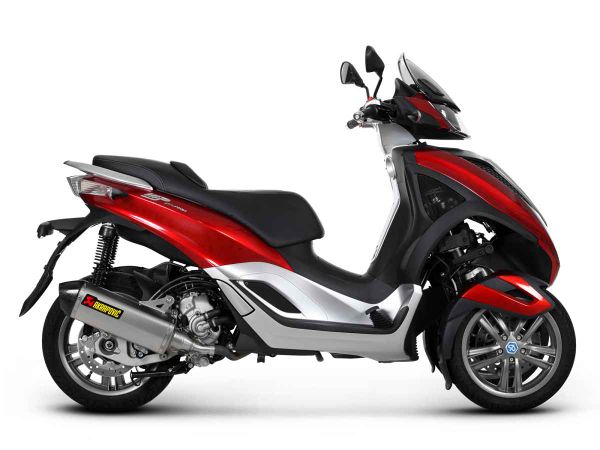 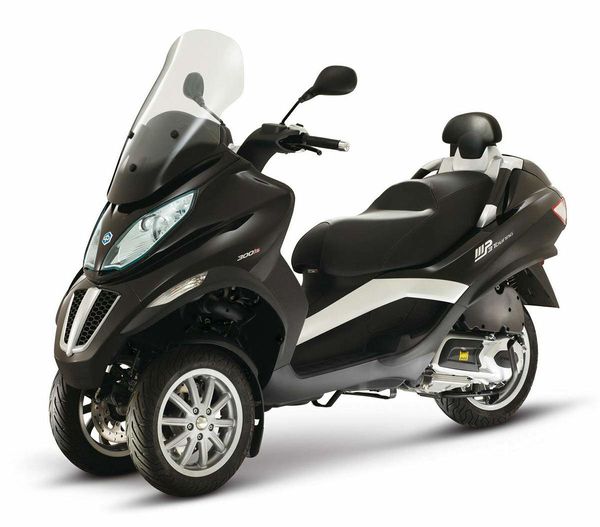 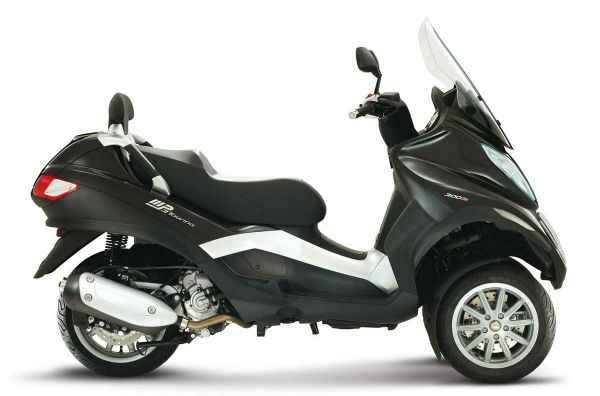 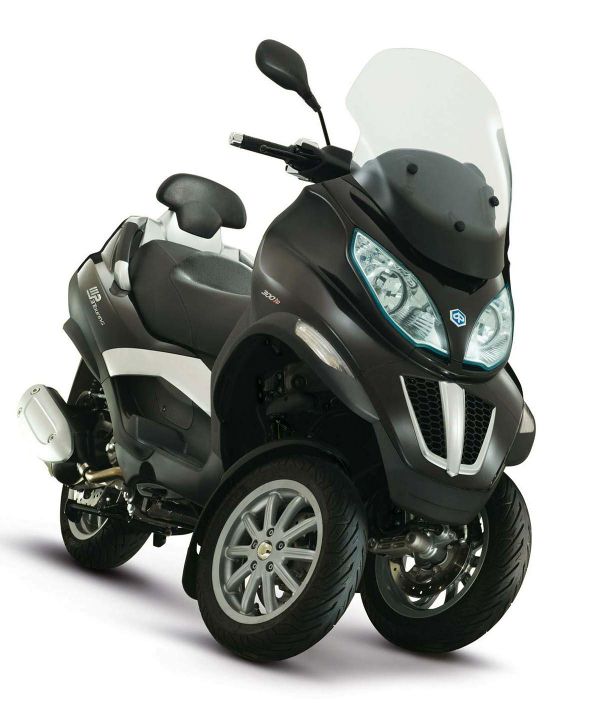 Levels of safety and roadholding that would be impossible with a two-wheeler, matched with power and verve delivering pure fun and maximum riding enjoyment: these are the unbeatable characteristics that have made the Mp3 such a brilliant success. The technically revolutionary three-wheel layout with two front wheels is the basis of the extraordinary success of the Mp3, a scooter unlike anything else in the world which, with its innovative design with two independently sprung and tilting wheels redefined the very concept of dynamic stability.

This winning formula - as proven by over 100,000 Mp3 scooters sold worldwide - has, over the years, spawned a multitude of different versions and spec levels to cater for the needs of every possible user. These include the Mp3 Hybrid, the world's first scooter with parallel hybrid drive and plug-in technology, and the Mp3 Yourban, which offers the exceptional stability and safety of the Mp3 in a vehicle conceived for urban use and simplicity. The Mp3 Touring brings completely revised looks and functionality to the most "classic" version of Mp3 while retaining the exceptional comfort, space and load capacity that have made the scooter a firm favourite for thousands of users all over the world. There is also a new and more extensive choice of engines: the new Mp3 Touring is available with the classic 125, 300 and 400 engine sizes, which are now joined by an all-new 500cc version offered in "Sport" and "Business" spec levels.

Design The evolved styling of the new Mp3 Touring is immediately evident at first glance. While retaining a distinct resemblance with the rest of the Mp3 family, the new Touring boasts a new honeycomb front grille and a satin-finish centre moulding in the front shield.

The design of the windscreen is also completely new and offers even more protection than before. The new windscreen is adjustable, with three different settings: the gap between the top fairing and the windscreen splits the air flow into two parts, directed over and under the windscreen itself to eliminate turbulence at mid and high speeds.

The new design of the top fairing has also freed up space for a practical storage pocket with three compartments under the windscreen.

Other new features are the hand grips, with improved grip and ergonomics, the silver color finish of the wheels, and the saddle, which is now upholstered with new materials and enhanced with relief stitching. The Touring retains the same class-beating features of the Mp3 in terms of comfort and functionality, such as the large, ergonomic rear grab handle with integrated backrest, and the luggage compartment, accessible from under the saddle and from the rear hatch, with a record-breaking 65 Liters

of load capacity and the ability to accommodate objects up to 1 metre in length!

Piaggio Mp3 Touring is offered with a comprehensive range (125, 300, 400 and 500 cc) of 4-stroke, liquid cooled engines with electronic injection.

The 300 cc engine with electronic fuel injection delivers 22.5 hp at 7,500 rpm, and produces a maximum torque of 23.2 Nm at 6,500 rpm: these figures translate to superlative responsiveness and even sparkling performance, making the Touring 300 ie capable of long range commuting in complete comfort. The 125 and 300 versions introduce a groundbreaking technological first for their classes: state of the art Ride by Wire technology, which electronically controls the throttle valve in the intake duct to regulate the fuel air mixture with absolute precision. The result of electronic throttle control is an optimized air/fuel mixture, which translates to smoother power delivery and, therefore enhanced riding comfort.

Riding the Piaggio MP3 is an experience that revolutionises the very concept of mobility, with the dual wheeled front suspension system ensuring levels of stability in curves far superior to any normal scooter. At speed, and even when riding behind other vehicles, the Piaggio MP3 Touring stays glued to the road and always delivers maximum performance in total safety. The benefits of the three wheel revolution can be felt particularly on wet roads and in other riding conditions that are critical for conventional two-wheelers. On city and urban streets, Piaggio MP3 is unrivalled in terms of safety: cobblestones, poor surfaces, tramlines and manhole covers are dispatched with previously unattainable ease and stability.

Measuring no more than a maxi scooter and boasting incredible agility, the Piaggio MP3 Touring is completely at home in the city centre. It is also remarkably easy to park, as the electrohydraulic front suspension hold system keeps the vehicle upright without using the stand. The revolutionary Piaggio MP3 boasts incredibly short braking distances unmatched by anything else in the scooter world: the powerful triple disc brake system and the incredible grip of the front end ensure stopping distances 20% shorter than the best performing scooter in critical grip conditions.

When the road leaves the town behind, the Piaggio MP3 really shows what it is made of. Road holding, cornering safety and lean angle unattainable for conventional scooters guarantee immense riding satisfaction on fast country roads.