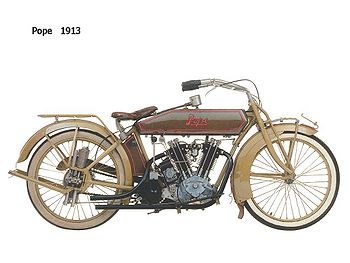 Pope was a motorcycle manufacturer established by Colonel Pope.

Colonel Pope was behind the Pope-Hartford, and Pope Toledo and the first Pope motorcycle appeared in 1908, and was a V-belt drive single cylinder with atmospheric intake, and no clutch or gearbox. It was a good little bike, but it was this model L that took the industry by storm when it appeared in 1913. The Pope had an overhead valve, V-twin of 61cu.in. (1000cc)!

Although the Pope Company didn’t support a factory race team, privateers on Popes occasionally managed to humble the pros on Indians, Excelsiors, Flying Merkels, Thors and Harleys that first year, on the board-tracks. They were soon eclipsed by the 8 valve Indians, Harleys, and OHC Cyclones, but these were specially constructed racers, and the Pope twin was never intended to be more than a roadster. When my friend Mike Sherwin examined the twin Pope engine I have, he remarked on how similar it was to the "90 bore" English JAP twin cylinder. It makes one wonder who copied whom? We will probably never know. Jerry’s bike is a single speeder with clutch, and with that much power in such a light frame, you don’t miss the gearbox, particularly around Jerry’s home in the flatlands of Kansas.