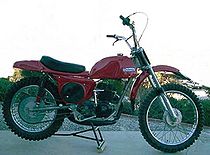 Rickman was established by Don and Derek Rickman and manufactured motorcycles from 1960 through to 1975. Rickman began with frame designs only and were for scrambles, and early form of motocross. They later made road racing motorcycles an in 1966, street legal road bikes were produced using a Triumph Bonneville engine. None of the British motorcycle manufacturers would sell engines to them so the frame kits were built for many engines, including Triumph twins, BSA singles and Matchless. Around 1971, Rickman finally began producing complete motorcycles in 2 displacements, 125cc and 250cc. The 125's had German Zundapp engines, while the 250's had Spanish Montesa engines. Many of these small displacement motocross motorcycles were shipped to the United States from 1971 to 1975.

In 1984 the Rickmans licensed production of their frames to MRD Metisse. Chassis kits are currently being produced by Metisse Motorcycles Ltd.