In 1851, the firm of George Townsend & Co opened its doors in the tiny village of Hunt End, near the Worcestershire town of Redditch. The firm specialized in sewing needles and machine parts. When George died the company was passed ot his son, George, Jnr. Like many other manufacturers, Townsend & Co examined bicycles and considered options for getting into the cycle business. Their breakthrough was a local invention - a saddle that only used one length of wire in the two springs and in the framework. This was adopted, patented and marketed as the Townsend Cyclists Saddle & Spring and enabled the company to enter the bicycle parts trade.

From bicycle parts, George Townsend Jr slowly moved on to producing bicycles himself. He was also supplying a wide range of parts to other manufacturers - Givry Works was growing rapidly. Over the next three years he developed his own range of over two-dozen machines. Each machine, known locally as the Townsend Cycle was reputed for its sturdy frame, a character that all Enfield bikes would follow.

Townsend got into financial trouble in about 1890 and called in some financiers from Birmingham. Unfortunately, they didn’t quite see eye to eye. So Townsend parted ways with the financiers leaving the company to them. The financiers then brought in Albert Eadie and R.W. Smith. They took control of Townsend’s in November 1891. The following year the firm was re-christened The Eadie Manufacturing Company Limited.

The company was registered on 24 February 1893 (No. 170,951). An office with showroom was opened at 166 Edmund Street, Birmingham (from December 1893 at 94 Snow Hill, Birmingham). The badge was a shield with a smaller shield inset containing a field gun facing left. It seems that initially the company sold machines made by the Eadie Manufacturing Co and moved into the former works of Townsend, George & Co. at Givry Works, Hunt End, Redditch, Worcestershire from 1896. There was a London showroom at 6c Sloane Street and a Dublin showroom at 73 Grafton Street.

In 1893 ‘Royal’ was added (from the Royal Small Arms name) making the model name ‘Royal Enfield’. At the 1893 Stanley Show the firm showed a front-driver and a tandem but the latter received some criticism. For the 1894 Stanley Show there were 19 safeties on display, plus two tandems. A main feature of their lady’s machine for 1895 was the frame which was adopted as a distinctive marketing feature at the instigation of Albert Eadie.

In 1899 the first mechanical vehicle was advertised by Enfield Cycle Company. It was available in both tricycle and quadricycle form, powered by a De Dion 1.5 hp engine. They also experimented with a heavy bicycle frame fitted with a Minerva engine clamped to the front downtube.

Royal Enfield built their first motorcycle in 1901 with a 239cc engine. In 1907 Enfield merged with the Alldays & Onions Pneumatic Engineering Co of Birmingham to manufacture the Enfield-Allday automobile. By 1910 Royal Enfield was using 344cc Swiss Motosacoche V-Twins engines, or large-displacement JAP and Vickers-Wolseley engines.

In 1912 the Royal Enfield Model 180 sidecar combination was introduced with a 770cc V-twin JAP engine, which was raced successfully in the Isle of Man TT and at Brooklands.

Enfield was called upon in 1914 to supply motorcycles to the British war department for use in World War I. It was also contracted by the Russian government to build motorcycles. The 6hp was used for carrying a machine gun as well as used for a stretcher-carrying. Enfield started using its own engines, a 225cc two-stroke and 425cc four-stroke V-twin about 1915. Enfield used its own 225cc two-stroke single and 425cc V-twin engines. They also produced an 8hp motorcycle sidecar model fitted with a Vickers machine gun. In 1921 Enfield developed a new 976cc twin. In 1917, women's police force officers were issued a 600cc, 2.1\4 RE 2 stroke with inlet-over-exhaust closed valve gear, two speed countershaft gearbox and chain final drive, and hand operated oil pump.

Royal Enfield established a subsidiary company in Madras during 1956 tasked with producing the 1955 specification Bullet, the British built machines having benefited from a new frame design for 1956. The Madras built Bullets continued in production after the demise of the parent company in the UK. Production concentrated on the 350cc variant although a 500cc version was eventually added to the range and the models benefited from subtle improvements over the years with items such as indicators being added.

In a strange "coals to Newcastle" manner Indian Enfield became available in the UK during the late seventies where their simplicity and frugality was well received by a small group of enthusiasts. Unfortunately the quality of the early imports, particularly in respect of the finish, was not to the standard expected in the west; however the factory, in response to demands from the importers, undertook a policy of improvement.

When Indian went under in 1953, Royal Enfield acquired the rights to the Indian name under the Brockhouse Corporation. The bikes were painted red and marketed as Indian Motorcycles from 1955 to 1960. The largest Enfield "Indian" was a 700 cc. The "new" Indian was not received well and the venture failed. In 1960, the marketing agreement expired and from 1961 Royal Enfields were available in the U.S. but under their own name until 1970. 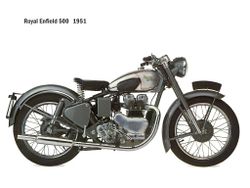 In 1955 Enfield of India began assembling Bullet motorcycles under licence from UK components. By 1962 were manufacturing complete motorcycles. Enfield of India, based in Chennai, continued, and bought the rights to the Royal Enfield name in 1995. Royal Enfield production continues today. The original Redditch, Worcestershire - based company dissolved in 1970.

For sale in the U.K.[edit | edit source] 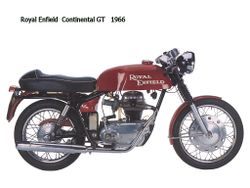