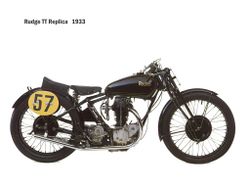 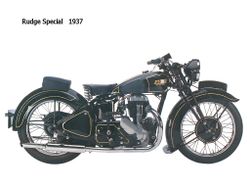 The Rudge bicycle factory began production in 1868 in Wolverhampton, England and produced its first motorcycle in Coventry in 1910. Rudge had a notable racing history during the early 1900's in a series of races all over Europe as well as a win at Brooklands 200 mile solo. Finances kept the company from being innovative and their technology became 'Old Hat', still using belt drive in the early 1920's. By the mid 20's, Rudge had developed 3 and 4 speed transmissions which helped to secure more racing titles.

Rudge Whitworth Cycles was a British bicycle and motorcycle manufacturer that resulted from the merger of two bicycle manufacturers in 1894, one of which descended from the original bicycle company founded by Daniel Rudge. Rudge motorcycles were produced from 1911 to 1946. The firm was known for its innovations in engine and transmission design, and its racing successes. Their sales motto was "Rudge it, do not trudge it." The company also produced the first detachable wire wheel in 1907, and was known for its knockoff wheels on sports cars well into the 1960s.

Rudge went into receivership in the early 30's and was bought by, oddly enough, HMV (His Masters Voice), the gramophone company who continued to refine the machines. The last Rudge rolled off the assembly line in 1939. Notables on this bike are the unusual but effective hand operated centre stand on left hand side and off-set wheel spokes.