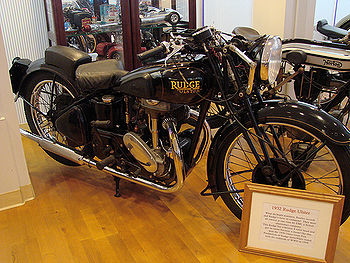 Rudge Whitworth's final sporting model was named after the race in which it won its greatest victory - the Ulster Grand Prix, billed as the world's fastest motorcycle road race. As it was first offered to the public, the machine was virtually a race replica, although in later years roadster refinements were added.

Rider Graham Walker (later a journalist and father of motorsports commentator Murray Walker) had been appointed Rudge sales manager is 1926. When he took first place in the 1928 Ulster Grand Prix, after an epic battle against rival Charlie Dodson on his Sunbeam Model 90, it was the first time a road race had been won at over 80mph.

Before the year was out, Ernie Nott took the world two-hour record at 100mph+ and there were further records in 1929. In Grand Prix racing there were mixed fortunes until 1930, when the first two Senior AT and the first three junior places all fell to Rudge.

The winning formula was a triumph of technology and engineering. All three junior Rudges were hone at more than 70mph, the first machines to break this speed barrier. It was the last year in which a pushrod machine would win the race, although the Lightweight TT fell to the 250cc version in 1931. As late as 1934, a trio of 250s privately entered by Graham Walker scored a Lightweight hat trick.

As a result of the factory's racing achievements, the range-leading Sports models were rechristened the Ulster in 1929. Refinements included dry-sump lubrication, a new crankcase and enclosed valves. Later models acquired contemporary styling, while the performance kept pace - 100mph in 1930.

Financial troubles were a constant factor for Rudge. The years 1931 and 1932 saw very poor sales and in 1933 the company had to halt many of its projects, as well as giving up racing. Later that year, Rudge went into receivership, but this was not to be the end, and in 1936 the music and electrical company EMI, a major creditor, took over Rudge. One of the first developments to affect the Ulster and Special model was a new aluminum cylinder head with enclosed valves and revised oil system.

During 1937 the factory was moved to EMI's base at Hayes, Middlesex. Sales gradually improved but it was not enough to save Rudge. With the outbreak if war, EMI had to concentrate on its main business, chiefly the assembly of radio and radar equipment. Although they had intended to resume production when peace came, this was not to be and in 1943 the Rudge name and tooling were sold off to Raleigh - a sad end to a great pioneering marque.