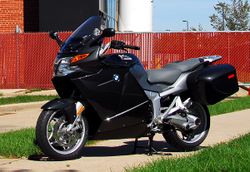 Sport touring refers to either a style of motorcycle design, or a philosophy of riding. It is an attempt to blend performance with long-distance capabilities while providing comfort and relative safety to the rider. Sport touring has evolved over decades from simply strapping a bag to the back of any sporty motorcycle to a very specified genre of motorcycle riding for which specific models of motorcycles, luggage, riding apparel, and other accessories have been designed. 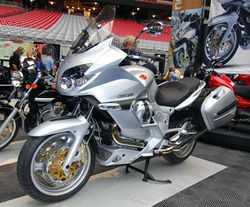 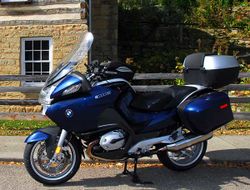 For the majority of the sport-tourer models on the market, manufacturers utilize an existing engine and technology from the current or last generation of their sport bikes. This is cost effective because the maker can reuse existing tooling and parts, rather than creating a dedicated engine design from scratch.

Engine designs are usually modified from their sport bike origins. These modifications typically consist of re-tuning and re-camming (change of valve cam lift & duration), the aim being improved mid-range torque rather than absolute peak horsepower. Additionally, it is common for certain rotating subcomponents, such as the crankshaft and flywheel, to be replaced in the sport-tourer version of the engine with heavier versions to smooth power delivery and improve reliability. Other differences from the sportbike class include:

The sport-tourer class has become important and competitive enough that many manufacturers now offer purpose-built engines for their sport touring models. The Honda ST series engines have never been used in any other models. There are no other bikes in the current Honda range that utilize the Honda VFR800's unique V-4 powerplant. The Yamaha FJR1300's engine, though closely related to the 1000 cc R1 sport bike engines in design, is in fact a dedicated engine available only in the sport touring FJR models.

The size and presence of sport touring bikes combined with their power and maneuverability have made them popular with police departments and emergency services.