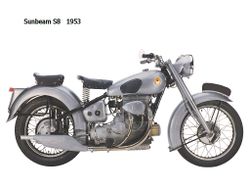 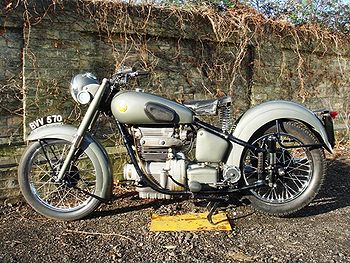 Sunbeam introduced the 500cc Sunbeam S7 to the public during 1947. Intended as the "group flagship" the overhead cam, in line twin cylinder machine was aimed at the discerning tourist. Shaft final drive, full mudguards and balloon tires combined with plunger rear suspension and telescopic forks helped to ensure that the rider remained clean and comfortable, but did little for the handling and unfortunately they also contributed to a weight of over 400lb. Consequently the machine struggled to exceed 75mph when tested, comparable to a far cheaper ohv 350cc single resulting in poor sales, which combined with high production costs due to the lack of common components to other machines in the BSA stable. A revised model, adopting new forks was introduced during 1949 together with a lighter, more sporting model typed the S8. The S8 reverted to normal section tires and employed standard BSA forks and front brake. The result was a machine that handled with greater precision and looked "lighter", although the outright performance did not change greatly. The two machines continued to be offered until 1957, selling steadily to their target market.