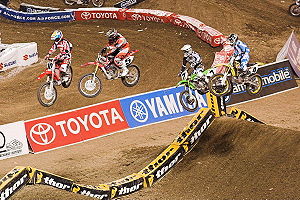 Supercross riders from the 2006 series in Anaheim

Supercross was derived from the sport of Motocross. While Motocross and Supercross are similar in many respects, there are significant differences as well. For example, the Supercross races are heavily advertised and televised motorsports events held within major cities.Also supercross tracks are more technical, not as fast as motocross but with a much higher difficulty level, further adding to the injury risk factor.

The sport Supercross is tailored to the TV spectator , as result of wide spread television coverage, as its target market. The term "Supercross" was coined as the event name for the first organized Motocross race that was successfully held inside a stadium in the United States. In 1972, racing promoter Michael Goodwin staged what he called the "Super Bowl of Motocross" inside the Los Angeles Coliseum in Los Angeles, California. This event was won by Marty Tripes at the age of 16. That initial contest featured many of the top Motocross riders of the time. It was such a commercial success that it spawned many imitators, and the term "Supercross" was coined to identify the similar to Motocross stadium cycling events. Modern Supercross races are sanctioned and governed by motorcycle associations, the main series being either the American Motorcyclist Association which is the oldest and most prestigious cycle racing organization (in America), or the THQ series of Supercross Championship events that are in part the work of Clear Channel, who in 2004 contributed expertise in filming on-track gate event competition for Supercross.

While growing consistently since the '70s, in the early part of the 21st Century Supercross' popularity really took off. In the United States, Supercross races today are the second most popular form of motorsport (behind NASCAR racing). The American Motorcyclist Association awards three Supercross Championship Champs each year. They are Supercross Champion which until 2006 was referred to as 250 class, Supercross Lites East (which was the 125 East) Champion, and Supercross Lites West Champion. World Supercross Champions are named by other racing organizations around the world. Supercross racing classifications were governed by the displacement of the motorcycle's engine until 2006. In the past, Championships have been awarded in 125cc (also known as "MX2"), 250cc ("MX1"), and 500cc displacement levels (also known as "MX3"). The 250cc Champion has always been generally considered to be the most prestigious.

AX stands for Arenacross. Supercross is not the same as the even newer sport of "Arenacross," which consists essentially of Supercross-style courses that are downsized even further and placed into smaller venues such as ice hockey and basketball stadiums. The popularity of Arenacross is growing however, since smaller cities that do not have large football and baseball stadiums can host Arenacross races. Arenacross held its first open in 2006 which achieved high attendance counts.

The AMA is using AMA Toyota Arenacross series as a way for riders to transition from amateur racing to supercross. Many supercross privateers race arenacross. Some of the top racers of arenacross include:

Trivia
Ricky Carmichael was the only racer to win both the AMA Championship and World Championship in the same year.

Merged with World Supercross Championship in 2008