The bike has a 6-speed transmission. Power was moderated via the Wet, multi-plate, manual. 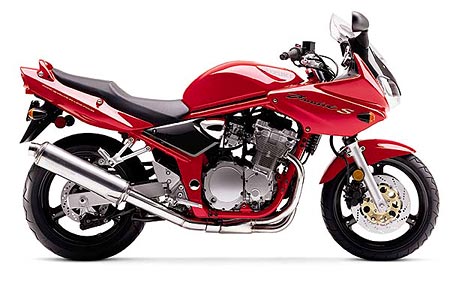 The 2002 MY GSF600S Bandit is dedicated to riders in search of a middleweight naked motorcycle with solid all-rounder capabilities. Sporting the same basic riding stance like its 1200cc-class sibling, the GSF600S Bandit offers a moderate package while still retaining a massive dose of fun. It's no GSX-R beast, but the fun factor is almost as high.

Nimble and maneuverable even when carrying a passenger, the GSF600S Bandit is loaded with an 80hp in-line four engine which sports air and oil cooling for a smaller weight. Exceedingly fun in the urban environment, the 2000 MY GSF600S Bandit can also be a trustworthy partner for longer range trips, especially when loaded with an accessory luggage system. 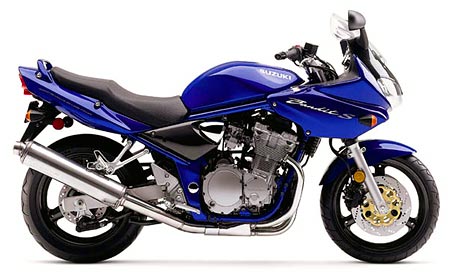 A very popular naked commuter, the 2001 MY GSF600S Bandit is a great all-rounder with lots of attitude and street worthiness to put a broad smile on the faces of both newer and more seasoned riders. This is the second model year after a generous update of the bike, which made it even more desirable, with better weather protection and day-long ergonomics to go with that.

Customers will get plenty of bang for an affordable price, with the air-oil-cooled in-line four producing up to 80 horsepower and its 6-speed transmission providing an excellent spread of nerve for both urban and highway rides. 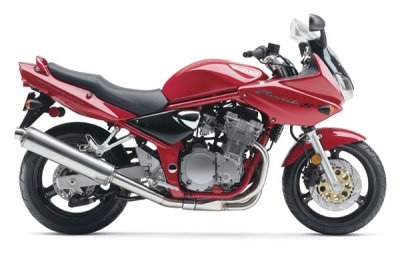 The revamping process the GSF600S Bandit undergone recently adds sleeker lines to this nifty middleweight all-rounder, plus a dash of sportier character. The S suffix introduces an upper half-fairing, a front cowl with a dual headlight array and a windscreen for better weather protection.

The air and oil cooled in-line four delivers 80 hard-hitting horsies and this makes riding this fairly light bike quite a thrilling experience. And with a generous tank, the 2002 MY GSF600S Bandit also sports a very good range which makes it useful for longer hauls, as well.

The small semi-faired Bandit is an excellent choice for those in search of a middleweight do-it-all street machine. Compact and exceedingly agile in the urban clutter, this 80 hp bike is the right way to get form A to B quickly and have fun while doing this.

Its sporty in-line 4 engine is mated to a 6-speed transmission which makes everything feel natural, both when streaking through slow traffic and when blasting long the highway. The half-fairing and the front cowl add extra protection form the weather, while the windscreen makes longer rides more comfy, as well. Middleweight sportiveness elite, welcome the 2003 MY GSF600S Bandit!