From CycleChaos
< Suzuki GSX-R750
Jump to navigation Jump to search 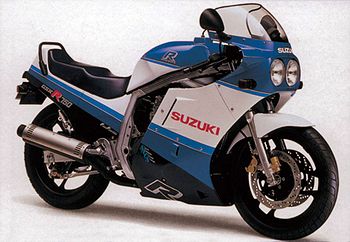 Wonder how many people scootling nonchalantly about on Suzuki's GSX-R realise that they are riding the most successful production racer ever? Before all you British bike fans write in about Triumphs, Morton’s etc, I would humbly submit that the pace of development and the resources available to competitive manufacturers these days make the Suzuki's achievement in staying ahead of the pack in almost every branch of 750cc road racing somewhat more of a noteworthy achievement.

That's my view anyway, and I'm sticking to it. Even now, getting on for three years after the GSX-R first came out, only the five-valve FZ Yamaha can really give it any trouble on the world's racetracks. By the middle of this year, Heron Suzuki had sold their entire allocation for the UK, with no prospect of any more coming in for some months. And that's not just a case of pessimistic ordering either. The bike is a genuine sales success, no question about it.

Still, some folks are never satisfied. Excellent machine though it is (albeit with a few funny foibles which I'll describe shortly), many owners have a yen to make it go still faster and handle still better. So in this article I thought I'd pick a few brains for ways to make these things happen.

I should say straightaway that I hadn't ridden a GSX-R750 for a good while when I climbed aboard the '87 model, so I went through the same kind of culture shock as your average first time punter experiences on one after a lifetime of "ordinary" bikes. The overriding impression and it is one which lasts throughout one's time with the bike, is how incredibly light it is.

This lightness manifests itself in many ways, some good, some bad. On the plus side, it invests the bike with an agility it shouldn't really have with 18-inch wheels. The relative slowness of steering will be obvious to anyone used to one of the more recent 17-inch models, such as Honda's CBR600, but in practice the Suzuki is so chuckable that this is only a minor gripe.

Another benefit of light weight is the positive effect it has on the bike's power to weight ratio. With less than 4lbs (excluding the rider) to be shifted by every one bhp, the GSX-R in standard trim is plenty fast enough for most riders. And the chassis is capable of keeping the whole plot safe at speed, too. Braking is phenomenally good, and all 750s now have a longer swingarm which makes them less twitchy at speed than the somewhat notorious early models.

On the 1987 bike, rear shock travel has been reduced by 5mm by the simple process of extending the bumpstop by that amount. By the R's otherwise high standards, the rear end is less than brilliant. The shock is not sophisticated enough to keep the back wheel under anything like proper control on typical British roads. Nailing the bike's power to the ground in the intermediate gears on anything other than a billiard table-smooth surface can be alarmingly difficult; the rear tire skips all over the place, and the engine note rises and falls in potentially damaging sympathy. Towards the end of my two weeks with the bike, I was beginning to understand that the best way of riding it was as near flat out as possible. Under those circumstances, everything seems to come together in a screaming, rushing blur of speed and violence. It's the nearest thing to flying you're likely to sample outside of an actual aeroplane. Common sense tells you that the 1100 is consummately superior to its little brother, in every way really. But that doesn't douse the special kind of burn you get from the 750. It's a hooligan machine of the first order.

All this makes the GSX-R sound like a pretty wonderful road bike. And that's exactly what it is. But the odd conquerable inadequacy does mean that it isn't perfect. This imperfection would be most obvious to anyone choosing to race one, but it could conceivably spoil the enjoyment of a hard road rider as well.

What follows is just a small nugget of the accumulated knowledge and experience of four of Britain's foremost engine and chassis tuners. Some of it will be of more immediate interest to those who want to race their GSX-Rs than to those who just want a simple go-faster package for the street. Other bits might seem a touch obvious, not to say wimpish, to those who are already well down the tuning road. Bear this in mind, along with the unalterable fact that this is a road bike we're dealing with, and you won't go far wrong.

The main shortcoming of the SuzukiGSX-R750, certainly as far as extended use on public roads is concerned, is the very same feature which has made it such a roaring success on the world's racetracks — namely, the frame. Constructed from aluminum alloy, it is extremely light; on the downside, this type of material tends to "work-harden" and become relatively brittle over a period of time. Although it's reasonable to assume that Suzuki have used an appropriate "mix" so that the effects of this process are not too pronounced, it will be interesting to see just how many early model GSX-Rs are around in five years time.