The engine was a air cooled four-stroke, 4-cylinder, 16-valve air/oil cooled with DOHC and TSCC. A 71.1mm bore x 71.1mm stroke result in a displacement of just 750.0 cubic centimeters. Fuel was supplied via a double overhead cams/twin cam (dohc).

The bike has a 6 speed, manual transmission. Power was moderated via the Wet multi-disc, manual.

It came with a 120/70-ZR17 front tire and a 150/70-ZR17 rear tire. Stopping was achieved via Dual hydraulic discs in the front and a Single hydraulic disc in the rear. The front suspension was a Telescopic, oil damped, 4-way adjustable rebound damping while the rear was equipped with a Link-type suspension, 4-way adjustable rebound damping, fully adjustable compression damping and preload. The GSX750F Katana was fitted with a 5.28 Gallon (20.00 Liters) fuel tank. The bike weighed just 412.26 pounds (187.0 Kg). The wheelbase was 57.72 inches (1466 mm) long. 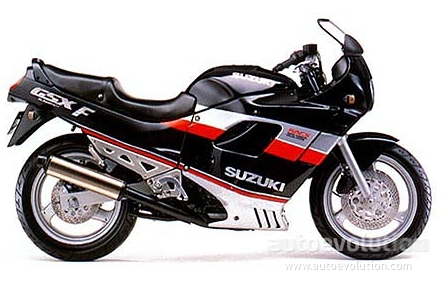 The 1988 Suzuki GSX 750 F Katana sports an air-cooled, four-stroke, 748cc, single cylinder powerhouse paired to a six-speed manual transmission, and can reach a maximum power output of 90 horsepower and 73 Nm of torque.

In addition, it comes standard with a 41mm, telescopic fork, a link-type, fully-adjustable monoshoc as a rear suspension, a dual seat with passenger grab rails, a full-fairing with a small windscreen, lightweight, three-spoked, wheels, dual front disc brakes, plus a 20-liter fuel tank. 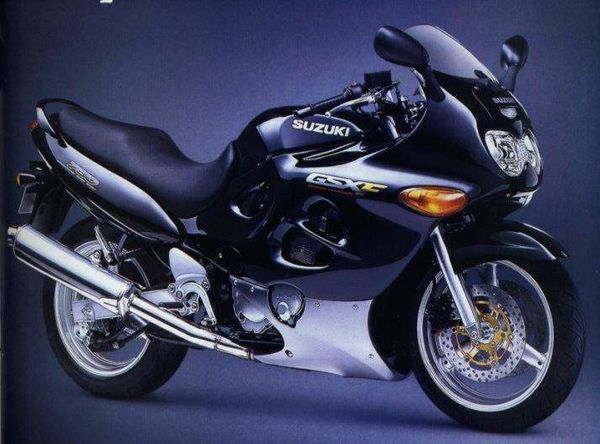 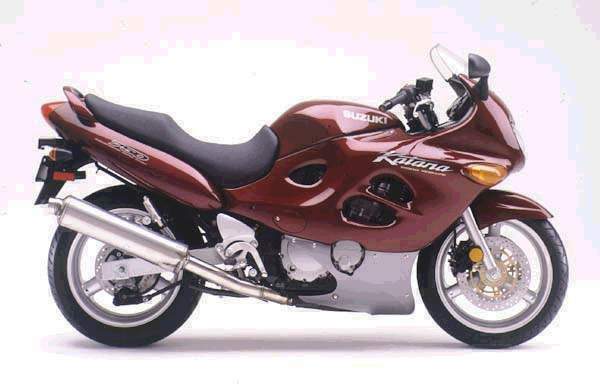 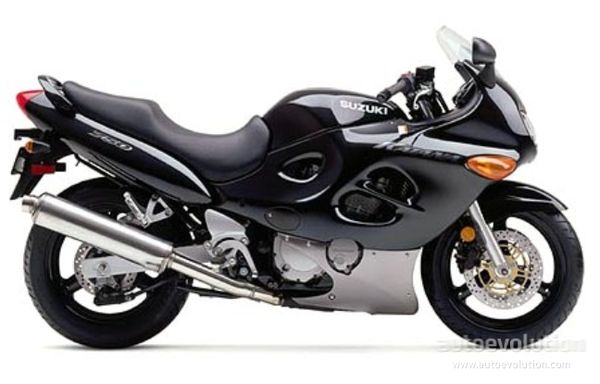 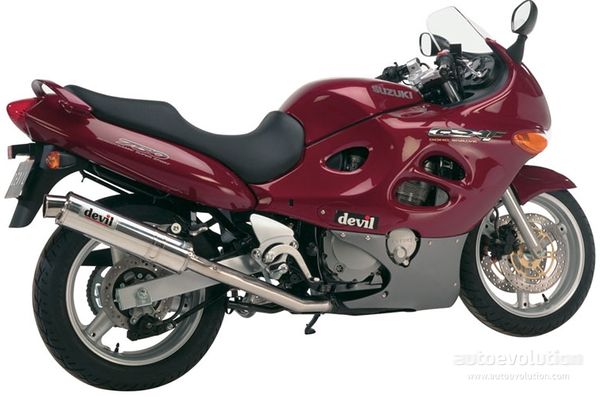 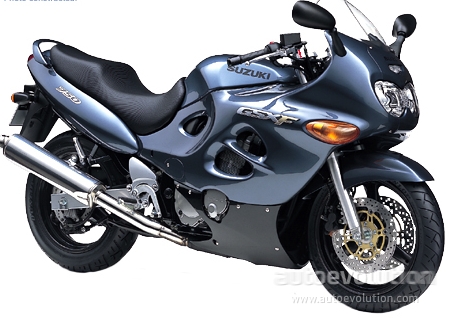 The 1998 Suziki GSX 750 F Katana has, at its heart, an air-cooled, four-stroke, 748cc, transverse four cylinder powerplant paired to a six-speed manual transmission, and can produce a claimed 92 horsepower and 66 Nm of torque. It also comes standard with a dual seat, passenger grab rails, a full-fairing, a small windshield, a chromed exhaust system, lightweight, three-spoke wheels, a telescopic front fork, a link-typ,e fully-adjustable monoshock as a rear suspension, and dual front disc brakes. 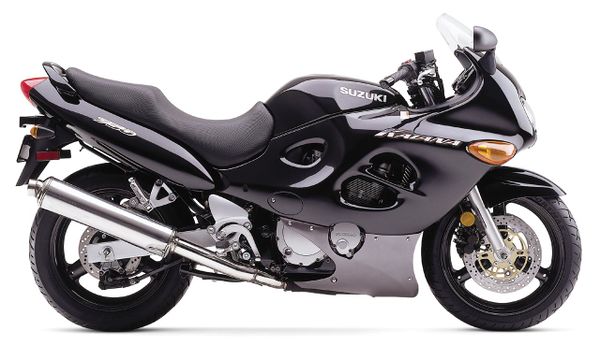 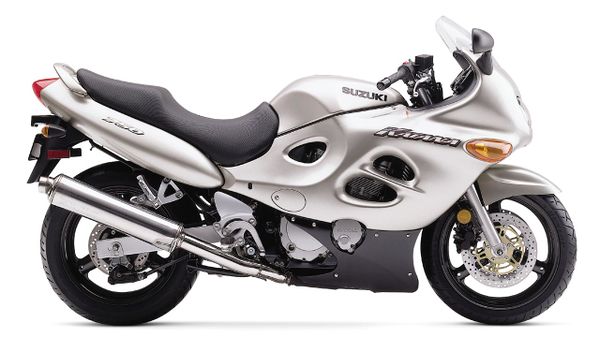 The 2001 GSX750F Katana mixes performance and value in a package which is both manageable and rewarding. The bike boasts the right amount of sport bike-natured response with the enhanced comfort a sport-touring rider values so much. This bike ups the game introduced by the 600cc Katana, with a bulletproof, high-performing engine which can produce around 92 hp, with just the right mount of sophistication to be both fun and easy to maintain. 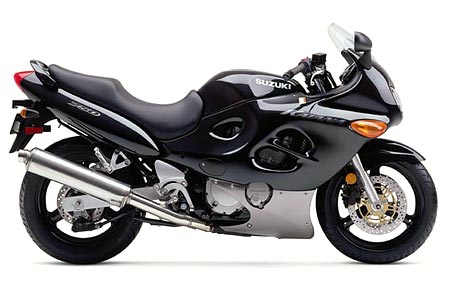 The 2002 MY GSX750F Katana is a true, no-frills sport bike with excellent all-rounder capabilities. Riders can use it for weekday commuting as it packs great comfort while retaining enough of its sporty nature for canyon fun and more aggressive riding. Still, the big Katana will also be a great choice for longer hauls as it can be equipped with accessory luggage systems and its fairing and windscreen offers good protection against the elements.

Not exactly a lightweight bike, the 2002 MY GSX750F Katana is however, a nice ride as its air and oil cooled in-line 4 cylinder engine produces 92 hp. Add in light aluminum wheels and powerful triple disc brakes for a precise feel around the bends and you get an affordable bike which offers plenty of bang for the buck. 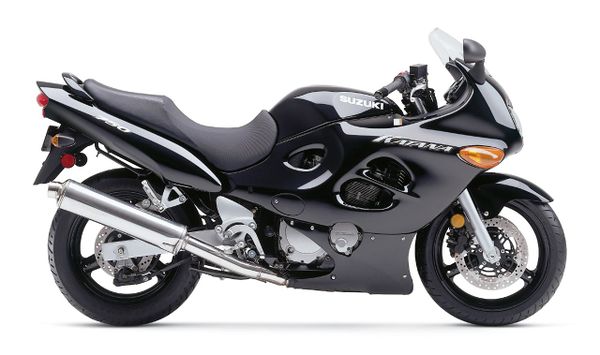 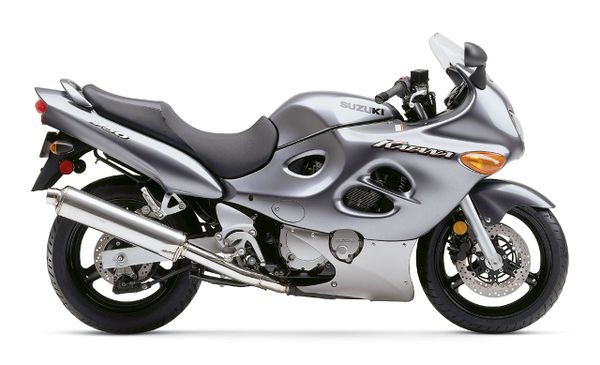 Fancy a pure sport bike with plenty of bang but are not really fond of the lack of comfort track-focused machinery comes with? Maybe you should try the 2003 MY GSX750F Katana, a real sport Suzuki in a street, all-rounder trim. This model year introduces a redesigned tail section, with a new taillight and cowl for better looks.

The big Katana packs 92 hp and comes with a versatile 6-speed transmission which delivers the right amounts of grit for both casual, daily traffic navigation, canyon carving or fast highway hauls as you head for your next vacation destination. 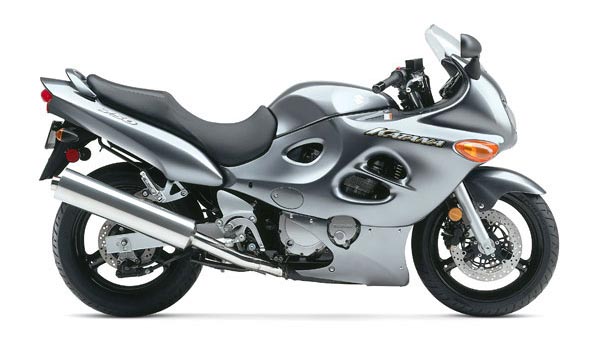 It's easy to tell the GSX750F Katanas which have been manufactured past the 2004 MY by the tank badge. Of course, this is some sort of expert observation, but indeed, the 2004 MY is the first which has a Suzuki S emblem on the fuel tank instead of the Suzuki logo in letters.

The bike has retained its huge popularity as a more streetable version of the sports-focused GSX-R750. Still, the Katana arrives with better ergonomics which favor day-long rides. Throw in some luggage system and you're already good to go. 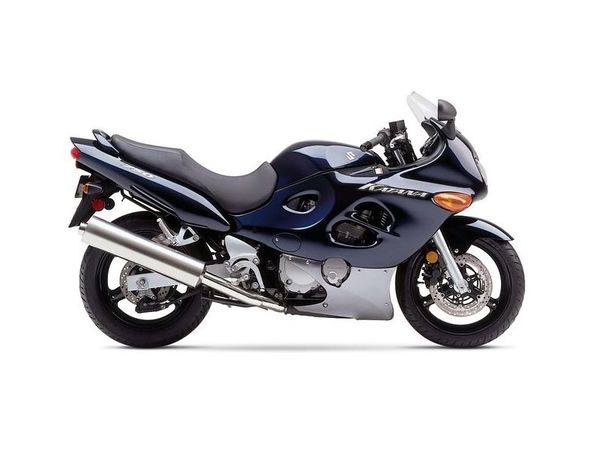 A sport bike derived form the GSX-R750, the 2005 MY GSX750F Katana was upgraded with a smart feature which shuts off the headlight during startup, to reduce the load on the battery. The 750cc in-line 4 was tweaked for better performance in the low and mid-range. Much of the Gixxer nerve is retained, but power is delivered in a more predictable, manageable manner, suitable for everyday riding. 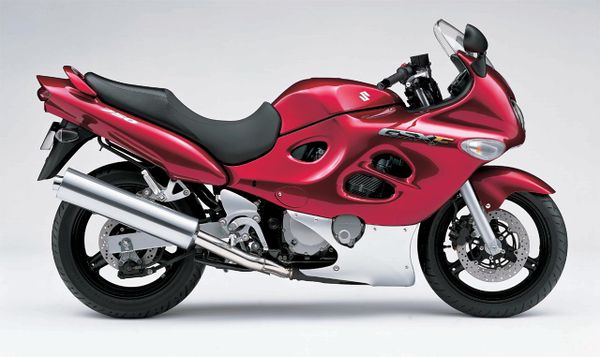 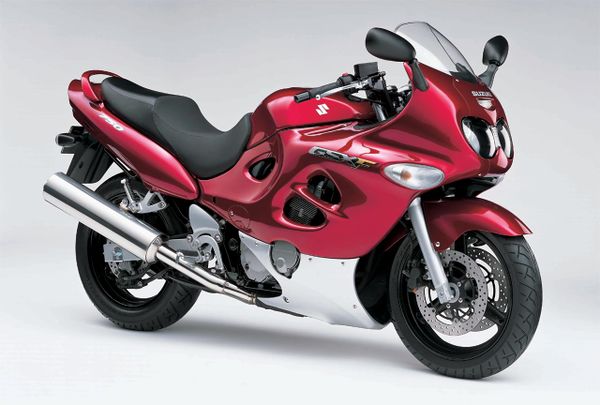 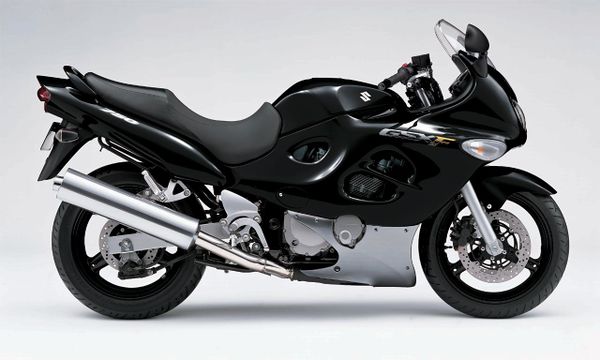 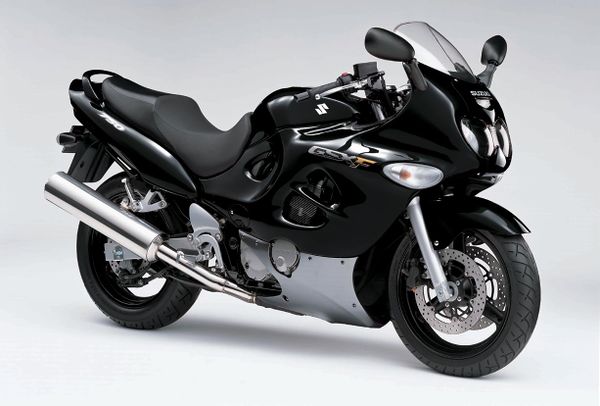 A bike which is no longer present in all the markets it used to, the GSX750F Katana is still getting niftier and niftier. The 2006 model year introduces voluptuous shapes which sort of hark back to theHayabusa, but the overall character of this middleweight classic sport remains an unmistakable one. Still, the big Katana shares some of Busa's upgrades, in the form of the clear-lens turn signals and the yellow bulbs.

Even the lower part of the belly pan has a different color, evoking some of the older Hayabusa liveries. Anyway, the Katana retains the unmistakable one-piece, two-bulb headlight, the rounded air ports in the side panels and the one-piece two-up seat, while providing class-leading comfort and road handling. 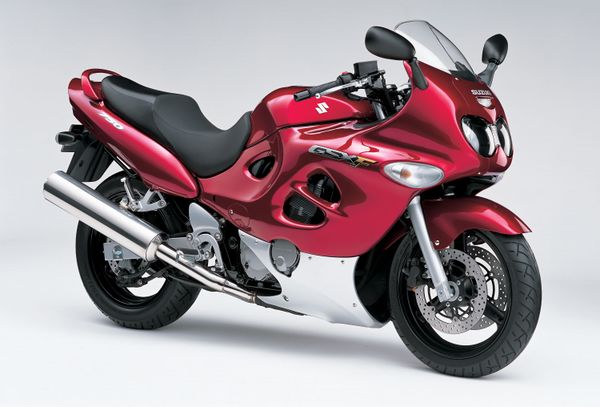 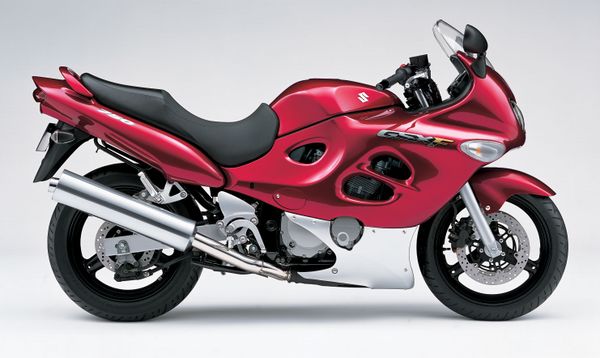 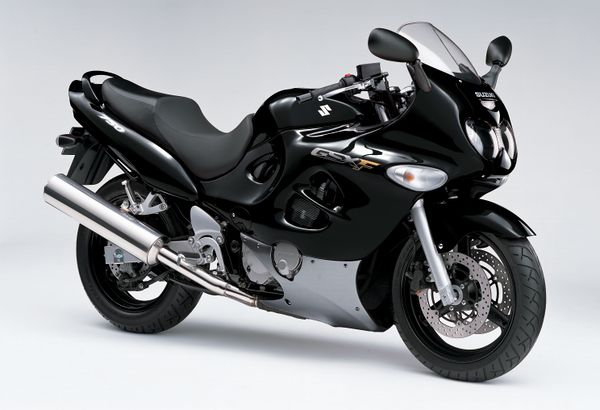 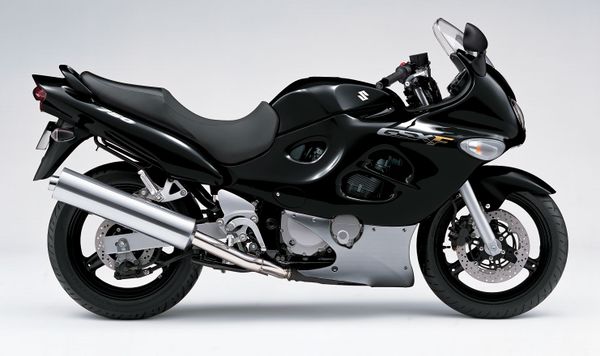 The 2007 MY GSX750F Katana proves that the longevity of this bike is driven by a strong demand in the market. The machines is almost unchanged from the previous iteration, and this means you're putting money down on a bike with air and oil cooling, carbureted fuel delivery and with solid streetability. The similarities with the Gixxer series are overshadowed by the resemblance of the bike with the Hayabusa.

Fluid rounded shapes, the lower part of the fairing finished in a different color for an eye-pleasing two-tone livery and the oval, white-lens front turn signals are more eloquent than anything.