The bike has a 6-Speed, manual transmission. Power was moderated via the Wet multi-disc, manual.

It came with a 120/70-17 front tire and a 190/50-17 rear tire. Stopping was achieved via Dual hydraulic discs in the front and a Single hydraulic disc in the rear. The front suspension was a Telescopic fork while the rear was equipped with a Dual piggyback reservoir shocks. The wheelbase was 59.8 inches (1519 mm) long. 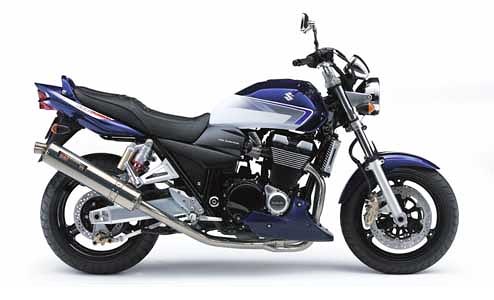 The 2006 MY GSX 1400 Yoshimura Edition represents the end of the road for this model. The emission regulations in Europe are becoming stricter by the year and this caused Suzuki to pull the plug on the model in several countries, including the UK. The GSX 1400 Yoshimura Edition is dedicated to the loyal British fans, and arrives with an aftermarket exhaust system, a chin spoiler and a limited edition purple livery.

On the tech side, the GSX 1400 Yoshimura Edition is identical to the base version, maybe with some extra grunt in certain rpm ranges, courtesy of the high-performance silencers.