The Suzuki GT250 is a motorcycle produced by Suzuki from 1973 to 1977. Suzuki GT250 was an upgraded version of the T250. In fact, the very first models (released in Japan) were exactly the same bike, only the model name was different. When the model was presented in the rest of the world, the additional ”G” in front of the T250 model name was to show that the model has been modernized with a disc brake at the front and with a new Ram Air cylinder head. It could reach a top speed of 93 mph (149 km/h). Claimed horsepower was 26.42 HP (19.7 KW) @ 8000 RPM.

The engine was a air cooled twin, two-stroke. A 54.0mm bore x 54.0mm stroke result in a displacement of just 247.0 cubic centimeters. Fuel was supplied via a membrane. 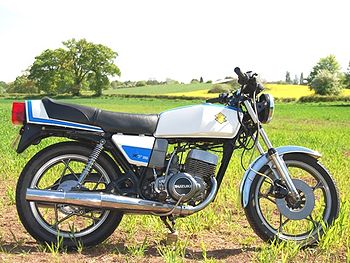 The Suzuki X7 is a great choice of practical classic motorbike for both 1st time classic motorbike owners and the more experienced. This motorbike has great appeal and growing classic-bike status, particularly in the UK. Performance is still enjoyable today with the bike readily doing 70 - 80 mph and handling is reasonably good when fitted with modern tires and sorted suspension. They also look great with genuine retro looks.

Bikes found on Ebay often appear to be in pretty good condition and running order and with a little caution there's no reason to believe they aren't. Of course, you will find ones in a really bad state but these can be overlooked until a better one comes along.

Many will be in original and un-restored condition but others will have been 'restored' or rebuilt to varying standards. I would not strongly recommend one over the other (original v's restored) but if engine work has been done (such as re-bores or rebuilt cranks) make sure details and receipts are available and be sure that the bike has run well for at least 500 miles after the work to have some confidence in the work done.

This is generally a pretty robust bike. The engine is not in a high state of tune unless it has had tuning work done. Standard examples should be reliable if looked after with good 2-stroke and gearbox oil, regular spark plugs, clean and standard air filter and exhausts and standard main jets in the carburetors. If kept standard they should easily cover 15,000 miles before needing a re-bore which is an easy job (for a good workshop) that does not cost a fortune (see more information under "Rebuilding"). I would personally avoid tuned examples and be sure that ones fitted with non standard air filters or exhausts have been correctly jetted to suit. Adjusting the carb's main jets to suit aftermarket air filters or exhausts involves a fair amount of experimentation and 'plug chops' by someone who knows what they are doing. Done correctly the results (sound, looks and performance) can be well worth it. Done incorrectly and the engine will not run well, could run rich (too much fuel and too little air) or worse run lean (to little fuel and too much air), overheat and expire.

I would recommend buying and running one with the 2-stroke oil pump still intact, working and set to standard settings. This will help maintain reliability and save a lot of hassle and some risk of error when filling up with petrol.

A good engine should not vibrate significantly. There are areas where the engine is not as smooth (around the 5000 rpm mark) but once past this it should smooth out and feel happy. Any more severe vibration may indicate a worn crank (more expensive to fix than re-boring). Gear changes should be smooth (a clunk into first from neutral at stand-still is normal) and beware of 'knocking' noises which may be due to detonation (premature ignition of the fuel/air charge) which could be caused by poor tuning work (attempts to increase compression) or carbon build up.

One of the great things about the X7 is its simplicity. One of the reasons I don't have any pre-rebuild photographs of my bikes is that when I get them I am so eager to start stripping them down and they come apart so easily. You can easily take one of these bikes apart in an afternoon. Even the engine is easy to take out for one person. On a near 3-year old bike it is almost inevitable though that you will come across a couple of seized bolts or bearings that will halt proceedings and probably take longer to remove than stripping the rest of the bike. I had one such seized bearing on the swing-arm, removal of which resulted in a bent swing-arm which was successfully straightened with a bit of heat (as a precaution) and a vice.

Once apart the most complex part of the bike is the engine and this is very simple itself. No coolant/water-cooling to contend with, the top-end is dead easy to remove and inspect. The carburetors. are simple provided you are methodical, note how bits go together and keep one assembled for reference (assuming its right in the first place) or have an assembly diagram or manual (Haynes manual is available and recommended).

When it comes to rebuilding and restoring motorbikes there is a sliding scale of detail to which you can complete the job. Some choose a no-expense-spared full motorcycle restoration route, replacing any part that is not immaculate with new and original factory parts or refinishing to as new or better standard. Bikes like this are usually repainted to original designs and nothing can be non-standard. This is fine for some and I really appreciate seeing motorbikes done to this high standard. It is however a very expensive route to take and often impractical as not all parts are still readily available if available at all.

Two alternative options for rebuilding/restoring motorbikes are the purely mechanical rebuild and a mechanical & cosmetic rebuild.

This is the route I took with my current X7. As I rebuilt the bike I replaced damaged or broken components with new ones (preferably genuine Suzuki) where they were available. I always tried to get genuine original parts through my local Suzuki dealer < (Motorcycle Mart in Kidderminster) before looking elsewhere because as well as knowing the parts would fit and be right I actually found that the genuine Suzuki parts were no more expensive and often cheaper than aftermarket ones. I even found examples where genuine parts were cheaper than poor condition used parts off Ebay - a good example of this was when I bought all the components to replace the front disc brake master cylinder.

Given the minimal bodywork on the Suzuki X7 (tank, side panels, rear cowling and two small side-strips) I decided that I would pay for a professional paint re-spray. As the original fuel tank had rusted beyond repair I had already bought a brand-new genuine Suzuki replacement supplied finished in grey primer ready for spraying. It is possible to get an acceptable and much cheaper finish with spray-cans but I reckon the risk of messing it up is high. I chose my own design for the paintwork rather than go for a genuine x7 design as I rebuilt the bike for my use and pleasure and liked the idea of having something different.

Areas where I was happy to keep components in their original state were things like the exhausts, front fork lowers and wheels. These were all cleaned well but not re-chromed, painted or powder coated etc. While the original exhausts have plenty of marks, scratches, discoloration and some rust (on the header pipes) they still look presentable when clean and just make the bike look used (which of course it is) rather than new.

A new pair of original exhausts would cost anything up to £ 500 so sticking with the originals saved a lot of money and helps to ensure reliability. Gibson exhausts hand-make great looking expansion chamber type upswept replacements but you have to get the jetting right to avoid an engine blow-up.

If you buy a bike like the Suzuki X7 or Suzuki RG250 that is not immaculate and has not had a strip-down since leaving the factory 20 or 30 years ago and you want it to be safe, reliable and pass MOT's then it really should be dismantled, all parts cleaned, replaced where damaged or worn, and then rebuilt.

There is a growing movement of classic owners that appreciate the 'soul' of a bike, the scars and scratches that it has accumulated over it's life. These battle scars add character to the motorbike and give an immediate visible history of the machine which is appealing. This character is lost from a bike that has been fully cosmetically restored.

This is the route I am taking with my Suzuki RG250 which is currently in bits in the garage. I've chosen this route for this bike quite simply because I want to keep costs down on this one and my priority is having an enjoyable bike to ride rather than a one to look at. 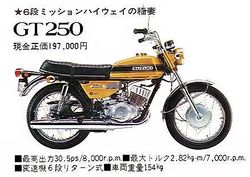 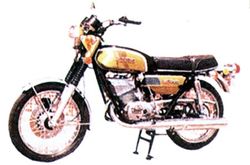 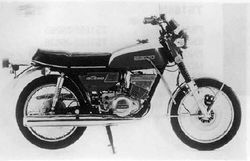 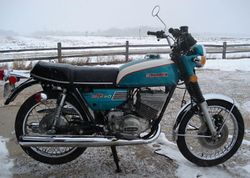 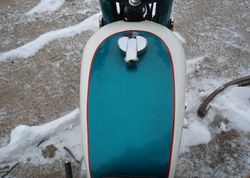 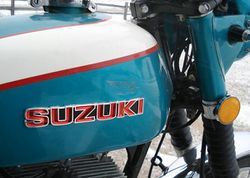 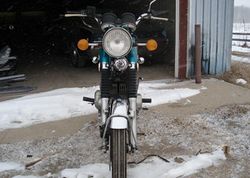 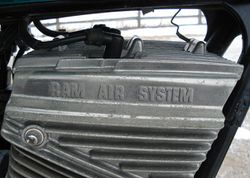 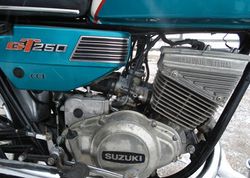 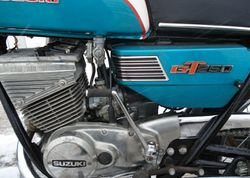 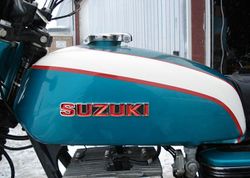 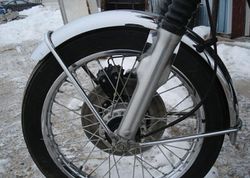 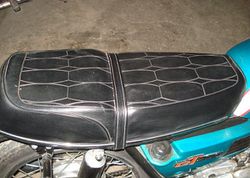 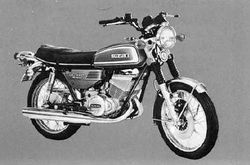 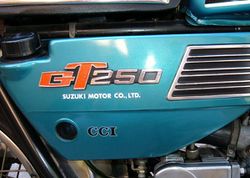 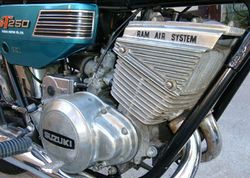 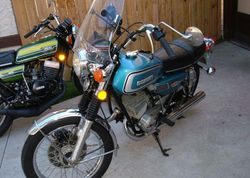 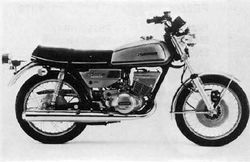 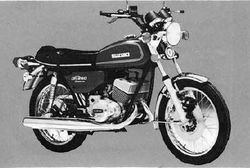 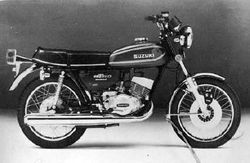