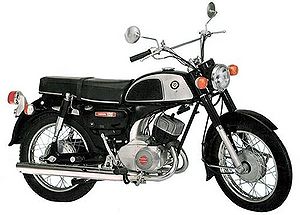 The Suzuki K125 was a 125cc single cylinder, two stroke, street motorcycle manufactured by Suzuki in 1974 with the overall retro design of the Honda C77. It was unusual in that it was a single cylinder yet had dual exhausts pipes beginning at the cylinder head.

The K125 had sculpted plastic fenders not uncommon on early Honda motorcycles. The fuel tank was a simple early-mid 1960s design.