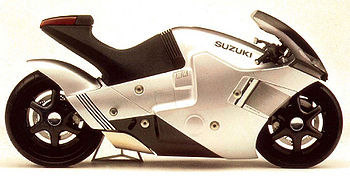 Suzuki has ceaselessly increased its market share in recent years. The marque only introduces proven qualities and refuses to run the risk of radical techniques; however. it is among the most adventurous and creative in its concert machines. At every show it reveals the thinking of its studios with a display of design studies which show the direction that the company thinks tomorrow's two-wheelers will take.

At the 1991 Tokyo Show. Suzuki revealed three prototype off-road and leisure machines with both wheels driven. It's an idea that seems to have been around for some time, since, as early as 1987. Suzuki exhibited the Nuda . The compact and fluid lines of this elegant supersports roadster prototype stunned viewers almost as much as its frame and transmission.

No Frame, Plenty of Ideas[edit]

Like the Elf a few years earlier. the Nuda had no frame, just simple hearer plates, which were bolted to a classic GSX-R750 engine and supported the single arms of the front and rear suspensions, which also housed hydraulic drives. Beyond these exciting L, technological visions of the future, the Nuda gave evidence of fundamental research with. for example. a magnetic key which immobilized all the machine 's functions and a superb analog electronic instrument panel which read up to 200 mph and 16,000 rpm.

The bike has a 6-Speed transmission.

It came with a 120/70 ZR17 front tire and a 180/55 ZR17 rear tire. Stopping was achieved via Discs in the front and a Discs in the rear. The front suspension was a Inverted 41mm Showa cartridge front forks are fully adjustable for spring preload, compression damping, and rebound damping while the rear was equipped with a Showa rear shock absorber, 46mm piston and 16mm rod, adjustable rebound damping, compression damping and preload settings. The wheelbase was 54.69 inches (1389 mm) long. 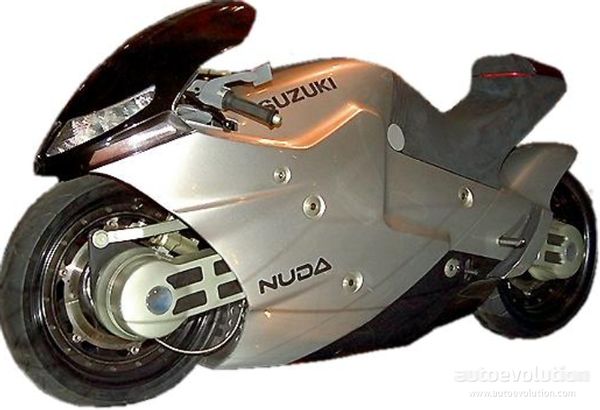 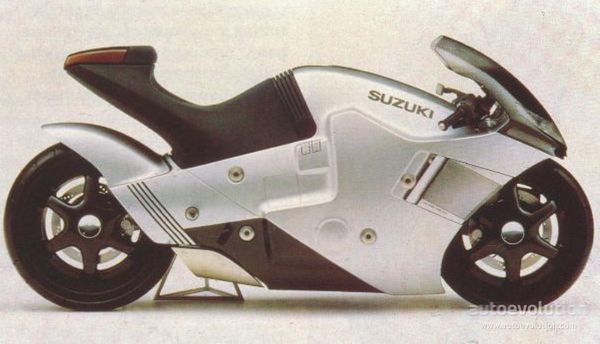 The Suzuki Nuda was seen for the very first time at the 1986 Tokyo Motorshow. This concept motorbike was powered by a GSX-R750 engine which made it capable of achieving over 175 mph.