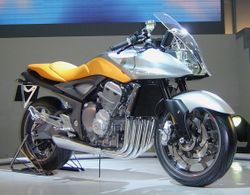 Suzuki Stratosphere is a Suzuki concept motorcycle, powered by a 1100cc transverse narrow-bore 24-valve inline-6 engine, rated at 180 HP. According to Suzuki press materials, the engine produced above 100 lb-ft of torque from just above idle all the way to redline. The engine was reported to be three-quarters of an inch narrower than the Hayabusa 4-cylinder engine due to the narrow-bore spacing. The prototype was first unveiled on October 22, 2005, at the 39th Tokyo Motor Show. Its general design is based on and harks back to the original Suzuki ED1/ED2 Katana created by Target Design. All the flouncy bodywork is wrapped around the first six-cylinder motorcycle engine from a major manufacturer since the Z1300 and CBX behemoths from Kawasaki and Honda at the end of the 1970s, The major difference here, however, is that the Stratosphere's power unit is anything hut massive. Due to what Suzuki calls a "space-saving design,** the Stratosphere's 1,100 cc six is claimed to he as compact as a typical four of the same displacement, and slightly narrower than its own GSX1400.

Specifics to the prototype shown in Tokyo:

Suzuki confirmed in August 2007 the Suzuki Stratosphere will enter production, although expected release date, initial model year, initial pricing, and specific list of changes from the original prototype shown in Tokyo were not released, aside from the fact that it would retain the six-cylinder narrow-bore engine (Source: Bike (UK) Magazine (print edition), April 2008, page 17). Given Suzuki's experience with the BKing, it is likely that the Stratosphere will appear, at least visually, very similar to the prototype, although the aluminum fairings are apt to be replaced by ABS fairings, and many of the specialty electronics (GPS, HUD, etc.) are unlikely to see production.

The Stratosphere will enter production as a 2009 model.

Oil-price hikes, the weak dollar driving declining motorcycle sales, and mandatory compliance with Euro-5 pollution control standards in Europe (effective September 2009) may have changed the production date of the actual production model (arriving in 2009 as a 2010 model), or may have eliminated the production potential all together. There are also unsubstantiated rumors that Suzuki is intentionally keeping the Stratosphere in the wings as a way of stealing thunder from a possible Honda introduction of a 1-liter VFR model (expected fall 2009 or spring 2010). 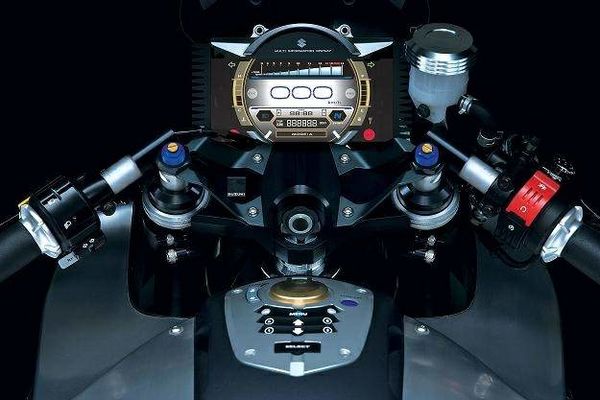 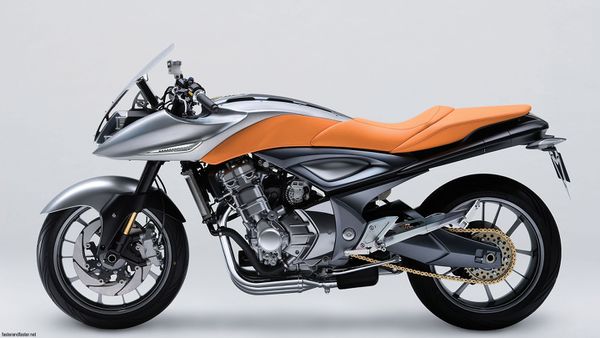 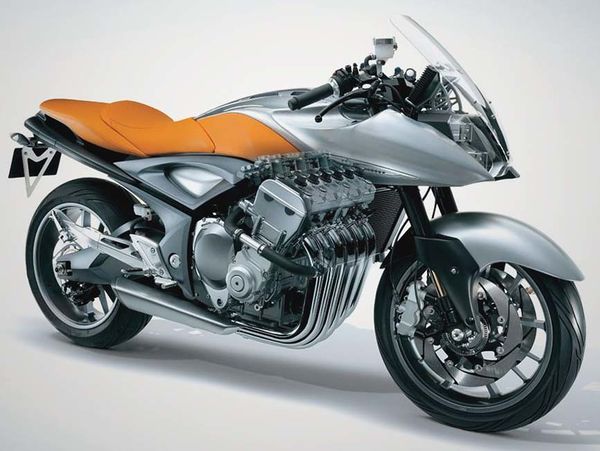 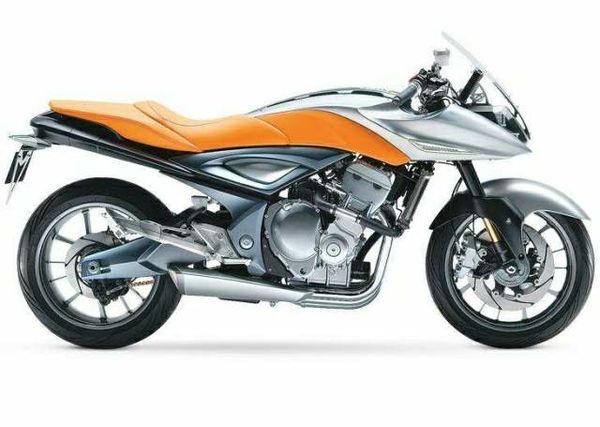 The Suzuki Stratosphere was a in-line six, four-stroke Concept motorcycle produced by Suzuki between 2005 and 2006.

The engine was a liquid cooled in-line six, four-stroke.

The bike has a 6-Speed transmission. Power was moderated via the Wet multi-discs. 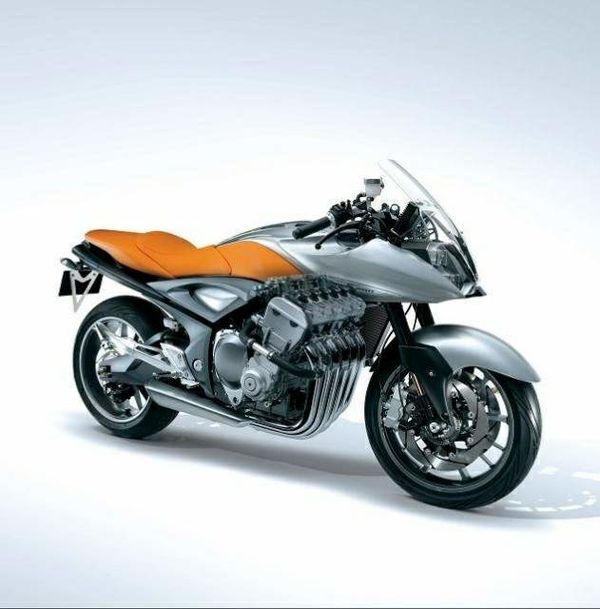 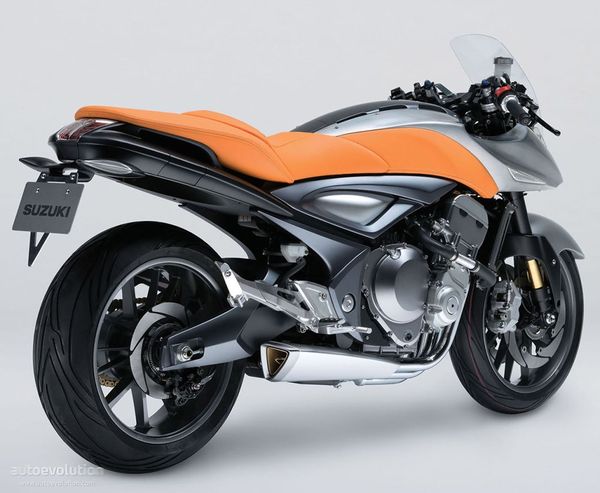 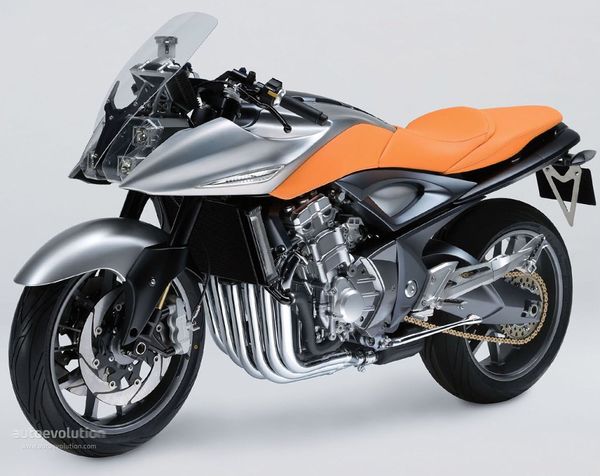 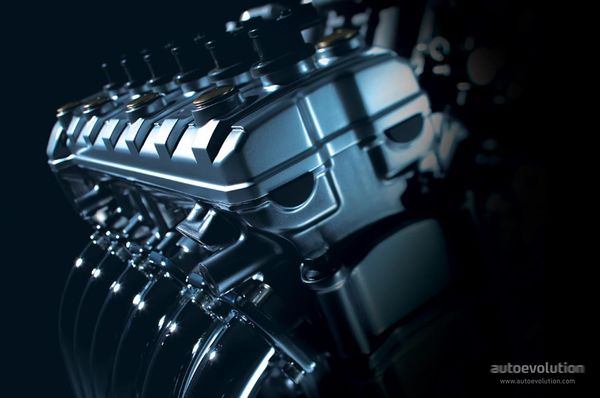 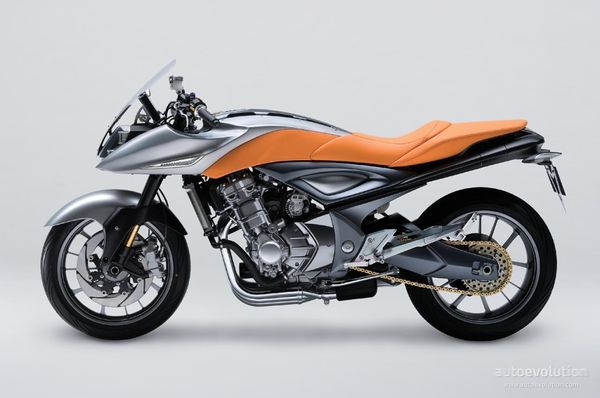 The Stratosphere is a concept bike expected to hit the roads in 2009. All that power is delivered to a dual-mode transmission. If you like automatic shifting–or if you are just momentarily tired of rowing the gearbox–this bike will do it for you. But if you require the classic experience, clutch lever and shift lever are there for you. It’s hard to say what’s next, but the work Suzuki undertook toward clutch/throttle/gearchange automation in MotoGP will not just be filed and forgotten. In the 1970s, my own stiff-necked devotion to manual shifting was charmed out of me by 300,000 miles in an automatic van.