The engine was a air cooled single cylinder, four-stroke. A 72.0mm bore x 61.2mm stroke result in a displacement of just 249.0 cubic centimeters. Fuel was supplied via a overhead cams (ohc). 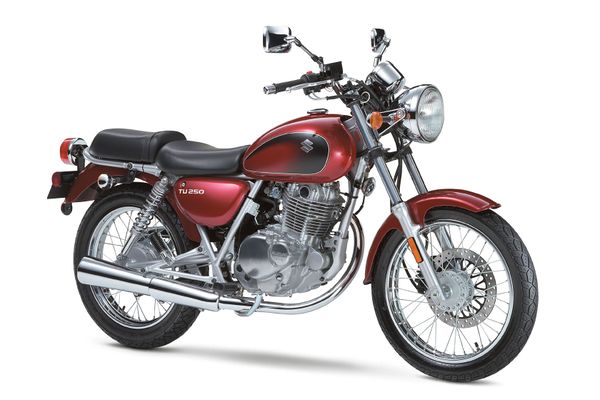 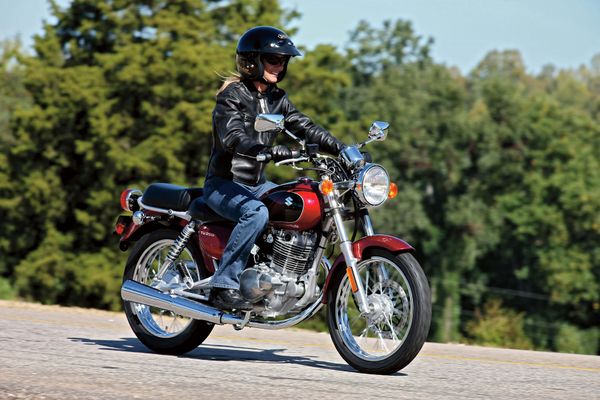 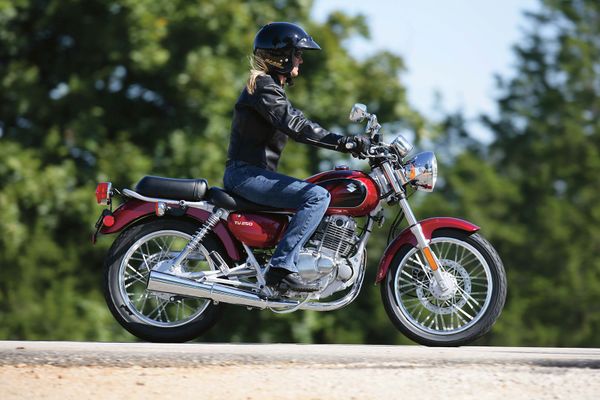 The TU 250 is a benchmark in the small-displacement classic-look bikes, and a strong competitor with the other similar machines, such as Royal Enfield. However, the looks are the only retro thing about it, as the 2009 MY TU 250 offers fuel injection, a catalytic exhausts, electric starting, digital ignition and a modern-specced 5-speed transmission.

A fine deal for those learning how to ride and an economical alternative to liter-class and bigger machines, the TU 250 is stylish and practical, especially as it retains so many timeless design cues which will never become out-fashioned. 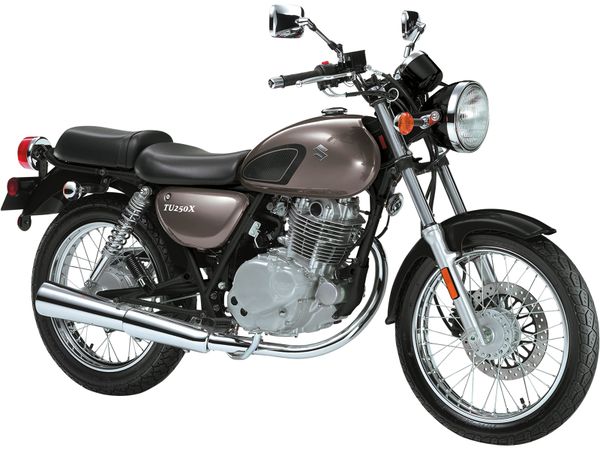 Even though it's year 2011, classic small-displacement bikes are never out of style. The new TU250X boasts the same character so many people fell in love with, while retaining the maneuverability and ease of use making this a good choice for all types of riders. the retro looks hide modern technology, as this quarter-liter bike is fuel-injected and provides great economy.

Fun, practical and convenient, the 2011 MY TU250X is a great 4-stroke commuter, especially as it can effortlessly carry a passenger, too. It can also serve as a neat first bike or beginning riders, helping them build confidence and experience. 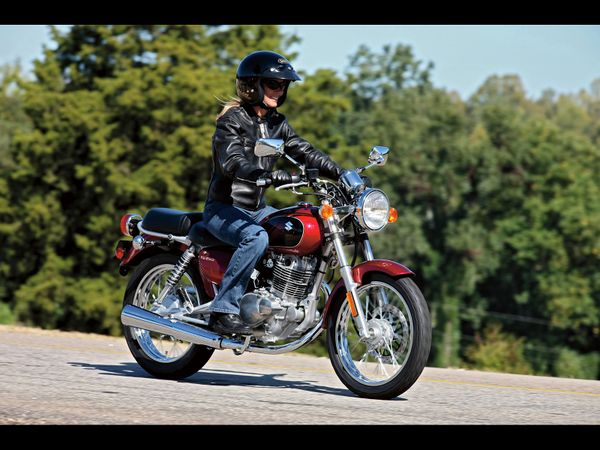 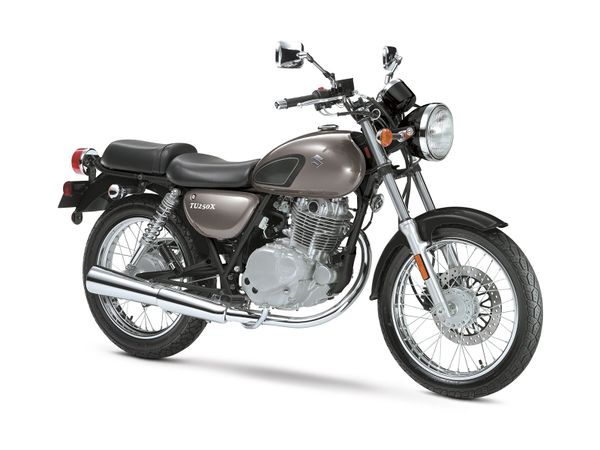 One of the bikes we will meet at the the confluence of practicality and style is the 2012 MY TU250X Suzuki's proposal for the entry-point retro-looks machines. Small, compact, reassuring and naturally fun, the TU250X embodies the bike-of-yore style while blending it with modern elements, such as the fuel injection system.

The TU250X rolls with classic wire spoked wheels, a two-piece two-up seat, dual chromes rear shocks and a flared exhaust. Minimalist controls and a single-gauge instrument cluster are bare necessities but they provide all the info you need to know about. If you are looking for your first bike, or are a rider in search of commuter as an economical alternative to the big-bore machines, the TU250X could be one of the neatest choices. 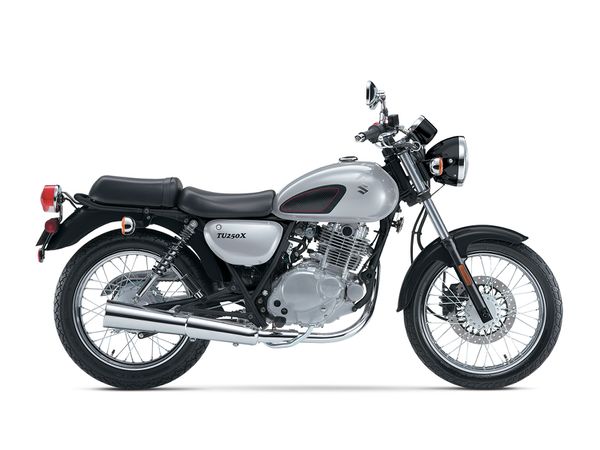 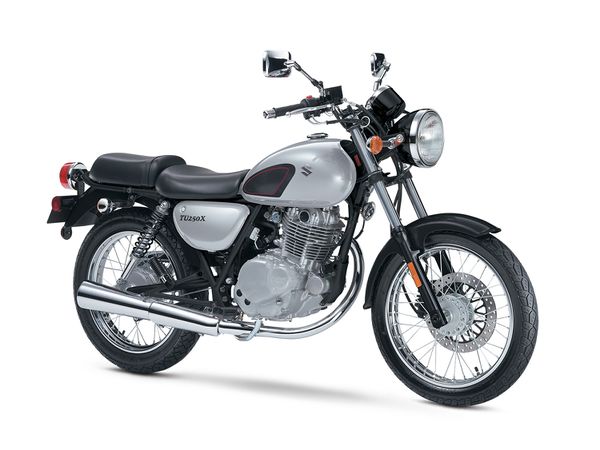 The TU250X is the perfect excuse to leave your big-bore bike at home, dress some fancy clothes, grab a 3/4 helmet and some goggles and head out for a leisure ride. This bike is as retro as a Suzuki would go, at least in terms of styling. On the tech side, the TU250X is o course, all-modern, with fuel injection and others features comparable with anything else on the market, but the old-school vibe is still there.

A fun bike for the seasoned rider, the TU250X is also a wonderful first bike for new riders, and a great way to hone in their skills before taking the step up to bigger bikes. Simple, affordable, stylish and easy to handle, the 2013 MY TU250X is the classic air-cooled thumper to be seen on. 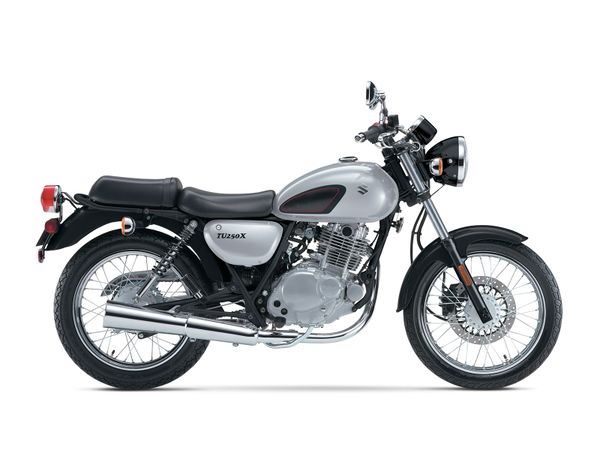 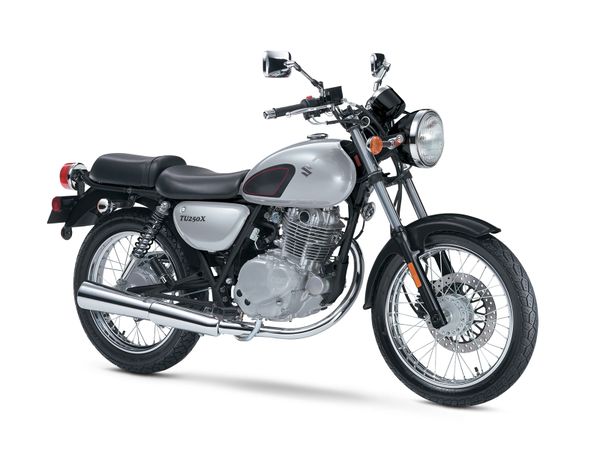 Even though the 2015 MY TU250X is not available in California, the rest of the world can enjoy this neat quarter-liter classic-looks bike and have fun riding both in the city and on the open highway. Styled as an authentic retro bike, the TU250X carries on the heritage looks and delivers wire spoked wheels, a chromed and flared exhaust,a bulbous retro fuel tank and a two-piece two-up saddle.

The old-school looks are, however, complemented by modern engineering hidden beneath the '70s attire. The single-cylinder engine is fueled through a most modern injection system and has digital ignition, Pulsed-AIR exhaust and more. 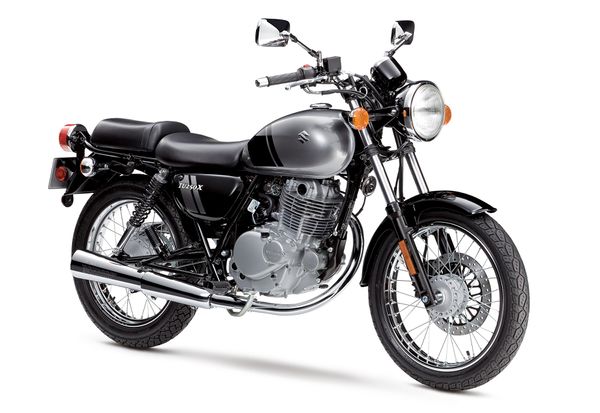 Tradition comes alive in the 2017 Suzuki TU250X. With classic styling, including spoked wheels, a round headlight, sweptback muffler layered with plenty of chrome, it’s designed to remind everyone that motorcycling is all about fun. The fun continues every time you ride, thanks to its light, agile handling and smooth performance. Best of all, it offers all that with an eye on economical ownership. 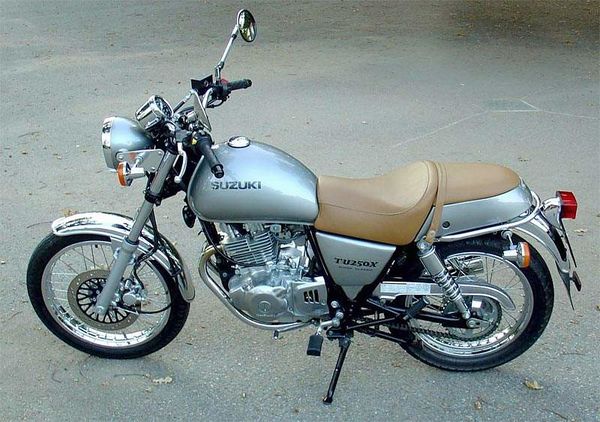 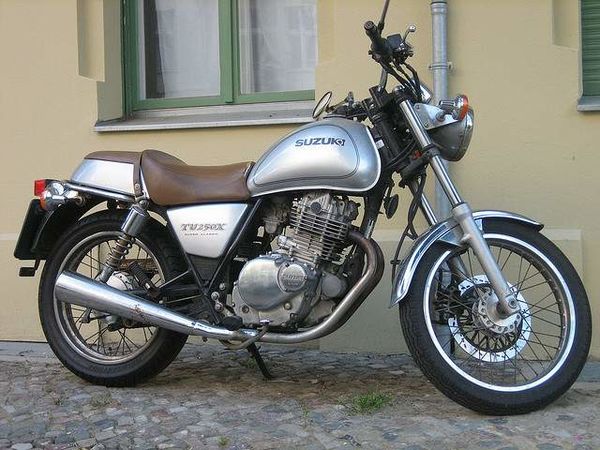 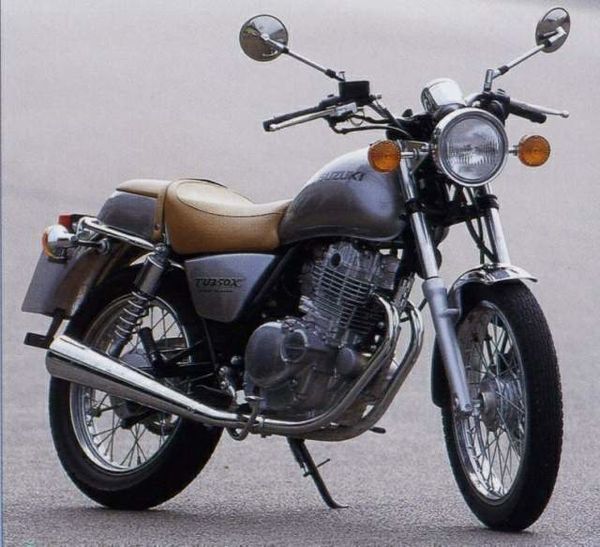 So what about the TU250 makes it so popular in Spain? Essentially it is a GN250 in new clothes. The engine, frame and running gear are the same as the custom styled stable mate. What we have here is a 249cc sohc, air-cooled single cylinder motor, the same as the GN250. Suzuki's paperwork, which came with the bike, made no hp claims. I would reckon that it's probably around 20bhp at most. The 'bars are lower and the seating position is far more comfortable for larger and taller riders.

The model I had was officially Warm Silver Metallic, but it looked more grey than silver. The other two colors are Candy President Maroon and Candy Teal Blueish Green. Both of these were very evident in the Spanish market. At 125kg it is very light and a seat height of 29.5 ins. makes it ideal for shorter riders as well.

The 12-litre tank and seat unit are very different to the GN. The tank is quite bulbous and the overall styling is supposed to reflect the bikes of the Sixties. The legend 'Super Classic' on the side panel is supposed to confirm this. The seat is actually a tan color rather than the usual black. The front section is removable and underneath you'll find a small tray for small items such as a disc lock. I couldn't fit my cable-lock in it though. The handbook and a European Suzuki dealer list is cleverly hidden under the rear seat in a small plastic 'cigar-case' style box cum folder. A novel idea.

Once on the bike, like most new Suzukis there is a clutch interlock and a cut-out on the side stand. Starting means pulling out the choke from the single carb, pulling in the clutch and if in gear, pulling up the side stand before pressing the start button. The starter didn't fail to have the bike ticking over after only one press of the button. The choke can be put fully in immediately. The gearbox is the same reliable 5 speed unit that Suzuki have been perfecting over a number of years and this one is no different.

The controls all fall easily to hand and feet and are very easy to use. Suzuki has dropped the tachometer and has provided the rider with a single chrome surrounded speedo on the top yoke. The headlamp is a large, and effective, unit that features a painted body ands chrome rim. It also only boasts three idiot lights; two symmetrical green ones for neutral and indicator repeater and a small blue high-beam light inside the bottom of the speedo.

The demo bike also came equipped with a genuine Suzuki fork mounted fairing. This was perfectly color matched and fitted rigidly to the top of the fork legs between the yokes. It kept the wind off quite well and didn't have any real effects on handling.

Handling isn't too bad given the light weight and spindly S rated tires. Suspension is a little basic with only the rear shocks adjustable. However, it coped with me onboard very well. At higher speeds on sweeping bends there was a slight tendency for the bars to wobble slightly. This may be a combination of suspension, tires and the light weight of the bike combining. At 65-70mph the bike was pretty stable.

Overtaking is a serious business though. On the flat the top speed varies from about 65-75mph, on downhill runs I found myself shutting off to keep it in the 70's. Catching up slower moving traffic on the open roads required a lot of forward observation and planning to make sure that you can get past, and back in, before anything comes the other way, or worse, an incline appears, and speed begins to scrub off naturally! In the end, you get used to it and ride everywhere at 3/4 throttle! It is FUN!

The bike had only 360 miles on the clock when I picked it up from Crawley, and I added another 360 on trips commuting to work and on the BMF's Dunstable Downs run on August Bank Holiday Sunday. Given the low mileage it took a while to ensure that it was run-in okay. I cruised back on the motorways and after 88 miles managed to squeeze a mere 5 liters into the tank. I didn't believe it either! I had been moving along quite well on the motorways almost door to door and I'm sure Tesco aren't selling more petrol than their pump says! The first refill gave figures of 79.9mpg!

Although more suited to a smaller and lighter rider, the TU manfully took on the job of a whole week's commuting 15 miles each way to work and back. Mainly on fast A road and the Bedford bypass. Speeds ranged between 55 and 70 for most of the way. So imagine my surprise to get 158.2 miles for 9.5 liters - 75.6mpg! A smaller lighter rider must be able to get figures well in the 80's.

Returning the bike back to Crawley saw 171.1 miles on the clock before it went on to reserve. Not bad for a bike with a 12 litre tank and an oversized rider.

I took it on the BMF's Dunstable Downs Run, and it generated a bit of interest from folks that had never seen one before. I did my sales pitch for Suzuki in return for the loan of the bike. Most people commented on the old bike styling, and I think that's what Suzuki's designers had in mind.

The TU250 is the Fiat Panda of the bike world, well, possibly the Seat Marbella. The GN is the original and therefore the Panda! It is cheap to run, has few frills but seems to be utterly reliable. I speak from a position of knowledge having had a Panda for 160000 miles!

Admittedly, the bike is a little small for someone as large as I am. It is certainly too small for two-up touring, but as a commuter and gadabout bike it is ideal. It would suit anyone returning to biking after a lay-off, and also any learners that want a small bike to learn on and then keep for trips after they have passed the test. It is the ideal solution to the latest of the Government's "soak the car drivers as usual" scheme.

At the top of the Suzuki brochure for the model it says 'A Fun Bike that "Grows on You"'. It's true. Although small and relatively under powered I had a grin on my face after riding it!