The bike has a 5 speed, manual transmission. Power was moderated via the Wet multi-disc, manual.

It came with a 130/90-16 front tire and a 170/80-15 rear tire. Stopping was achieved via Single hydraulic discs in the front and a Drum in the rear. The front suspension was a Telescopic, coil spring, oil damped while the rear was equipped with a Link-type, oil damped, 7-way adjustable spring preload. The wheelbase was 65.39 inches (1661 mm) long. 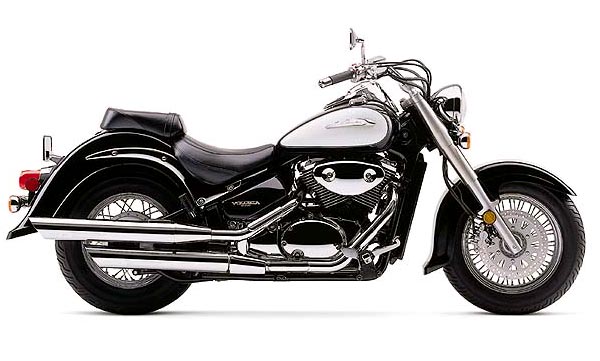 The 2001 MY VL800 Volusia takes the traditional chopper looks of the Intruder one step further into the realm of the cruiser styling. The bike uses the same 805cc liquid-cooled engine and rolling chassis, but the rest of the machine oozes a different character. The Volusia boasts more chrome, low, wrapping fenders, a different tank with the instruments mounted atop, dual chromed exhausts and a sculpted seat, matched by forward foot controls and a pull-back handlebar. 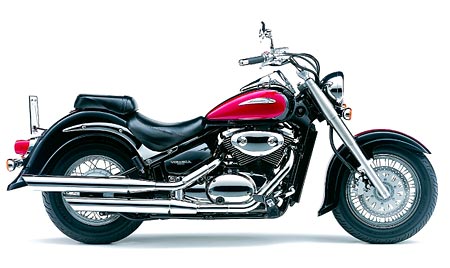 Based on the same middleweight platform as the VS800 Intruder, the 2002 MY VL800 Volusia is however a different kind of bike. The Volusia dropped the chopper looks in favor of the bobber styling, witha long, lo stance which oozes a commanding character despite its moderate displacement. Beefy tires, wire spoked rims, deeply-valanced fenders, long, chromed, slash-cut dual silencers and a tank-mounted console are all details which add classic and classy looks to the Volusia.

Even though some say that there cannot be big-bike style in the absence of an actual big bike, the 2003 MY VL800 Volusia is begging to differ. In fact, the Volusia is telling an even more thrilling story, that of a middleweight bobber which oozes classic styling and is packed with both tech feats and head-turning looks.

The 2003 MY brings multi-reflector turn signals for an updated appearance, while the overall stance of the bike maintains the same retro vibe. Laced wheels, deeply-valanced fenders, dual stacked slash-cut silencers and plenty of chrome in all the right places. Cue in the sculpted seat and pull-back bars which make a good complement for the forward-mounted controls, and the teardrop tank with a chromed console mounted on top for even more classic DNA.

The 2004 MY VL800 Volusia retains all the cool factor of the Limited Edition, even though it ditches the studded leather seats and the two-tone custom flame paint work. However, this doesn't make it any less a spectacular machine. The VL800 Volusia boasts the same bobber styling with a beefy front wheel and ample fenders, the bars reaching back to the sculpted seat and the tank-mounted console.

Gritty but still an amazing bike for daily use, the 2004 MY VL800 Volusia combines awesome looks with versatility and solid road worthiness.

The engine was a liquid cooled v2, four-stroke. A 83.0mm bore x 74.4mm stroke result in a displacement of just 805.0 cubic centimeters. Fuel was supplied via a single overhead cams (sohc).