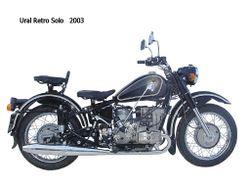 Produced in a big factory in the Ural mountains of Russia, hence the name, the firm has a long history of producing 650cc flat-twins based on the BMW designs of the early 1940s. Urals are mostly crude by modern standards, however, most of the 250,000 bikes produced annually are sold within the former Soviet Union. Some importers such as the British importer Neval produce custom versions such as Neval's Soviet Knight, which combines a 32 bhp motor and chassis, with high handlebars, running lights, and added chrome.