The engine was a air cooled single cylinder, two-stroke. A 57.8mm bore x 57.0mm stroke result in a displacement of just 150.0 cubic centimeters. Fuel was supplied via a single overhead cams (sohc).

The bike has a 4-speed transmission. Power was moderated via the wet, centrifugal clutch, cable operated.

It came with a 3.50-10 front tire and a 3.50-10 rear tire. Stopping was achieved via single disc. stainless steel disc in the front and a expanding brake (drum brake) in the rear. The front suspension was a single sided trailing link with hydraulic shock absorber while the rear was equipped with a hydraulic monoshock. The PX150 was fitted with a 2.11 Gallon (8.00 Liters) fuel tank. The bike weighed just 213.85 pounds (97.0 Kg). The wheelbase was 49.61 inches (1260 mm) long.

Launched in 1977 and sold in over two million units, the Vespa PX of 125, 150 and 200cc is the biggest sales success in the entire history of the Vespa company.

A two-stroke engine is a rare thing for any bike or scooter over 50cc today, so the 123cc two-stroke powering the PX125 is a welcome change of pace. It needs to be revved to get the best from it - trying to accelerate in too high a gear results in the motor bogging down. But keep the motor spinning and the PX will whisk happily along on a cloud of blue smoke. 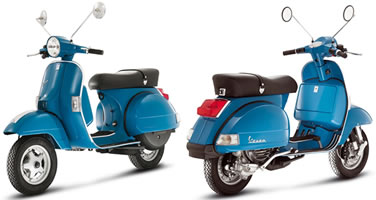 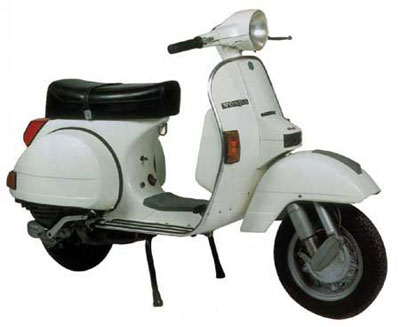 The Vespa PX125 has essentially remained unchanged since its introduction in 1977, but it doesn't feel 35 years old. Subtle changes to keep the Vespa up to date and to get it through Euro 3 emissions regulations mean it feels similar to a modern scooter, only with a two-stroke, manual engine. It doesn't handle like a sportsbike - but a Vespa is all about looking cool, not going fast. Remember that and it can be great fun.