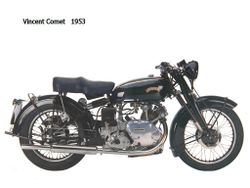 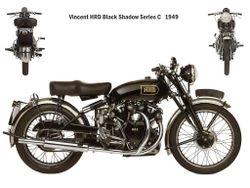 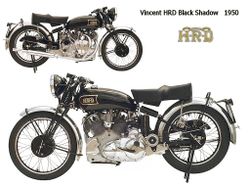 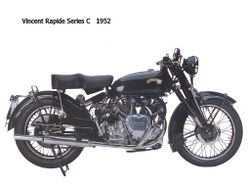 Vincent was a British manufacturer of motorcycles in the United Kingdom from 1928 to 1955. The Vincent HRD Black Shadow is one of the best known high performance motorcycles of the 1950s. In 1955 the company discontinued motorcycle production due to heavy financial losses.

Vincent HRD were in the happy position of producing the worlds fastest production motorcycle in the form of the Rapide, however and despite the Rapide's performance potential in standard form, the company was subjected to requests for a higher performance machine. Most enthusiasts looking at the specifications of the Rapide power unit recognised that it was endowed with a mild state of tune, if 45bhp and 110mph was available from an engine with a 6.45:1 compression ratio being fed by two comparatively small 1 1/16 carburettors imagine the results that a higher compression ratio and larger carburettors would bring. These thoughts were also held by Phil Vincent, who viewed a machine that was possessed with an abundance of power as being his ideal, allowing the rider to set the pace rather than being constrained by the machines limitations.

With a chassis approaching his ideal already there to be exploited the production of his "ultimate" motorcycle was a realistic goal, unfortunately other members of the Stevenage hierarchy disagreed, arguing that sales of the proposed machine would be achieved at the expense of the Rapide. Fortunately for enthusiasts PCV was not one to let boardroom opposition stand in his way, he told the press of the imminent release of the new model and authorised the production of prototype machines which used the experience gained with "Gunga Din", Cliff and George Brown's race machine, to achieve the desired level of performance for the new machine, dubbed the Black Shadow.

The increase in performance over the Rapide was achieved with a higher compression ratio of 7.3:1 and 1 1/8th carburettors. Ports were polished and the engine was effectively "blueprinted" at the production stage ensuring optimum performance. Stronger ribbed front drum brakes were employed which also offered a greater surface area for heat dissipation. A five inch 150mph speedometer graced the top of the forks and the engine cases, primary drive case, gearbox and magneto cowl were finished in a high gloss black enamel.

In all other respects the Black Shadow shared it's cycle parts with the Rapide, initially being offered in Series B form with Brampton girder forks before evolving into the Series C fitted with Girdraulic forks and offered alongside the B series machines during 1948/49 before taking over completely from 1950. When tested the new model proved to be capable of 125mph and could stop from 30mph in 22 feet. 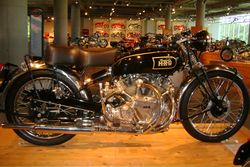 The Vincent H.R.D.'s were built to a specification, not a price, and were fast, expensive and very exclusive. Every enthusiast's dream was to own a Rapide or Black Shadow, the only machines that could cruise close to 100mph which was incredible performance in 1948.