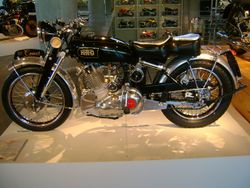 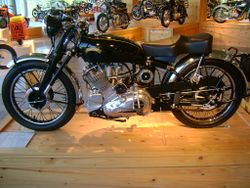 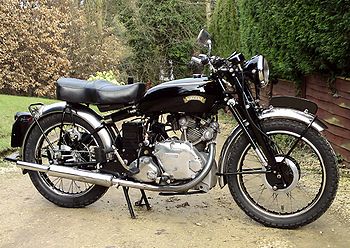 Introduced in 1949 and only available in Series C form, the Comet was to the single cylinder Vincent range what the Black Shadow was to the twins range. For those who wanted a 500cc single Vincent but could not stretch to a Comet there was the Meteor. Conceived as a high speed sporting single, it was built to the same exacting standards and offered the same features as those afforded by the twin cylinder range to those seeking a 500cc machine. When tested by Motor Cycling the new model proved to have the performance expected of a machine bearing the famous name, with a top speed of 88mph and braking that resulted in it stopping in 21 feet from 30mph, the latter figure a record at the time and the former placing it at the forefront of its class. The new model utilised Girdraulic forks, unlike its sibling the Meteor, which relied on Brampton girders.

The Comet was a single cylinder less expensive, affordable alternative to the big twins such as the Rapid and Black Shadow. It was often referred to as "Half a Vincent", but it still had the desirable mile eating capabilities of its bigger brothers. A racing version was also available on a limited basis, the Grey Flash, which helped to publicize the model.