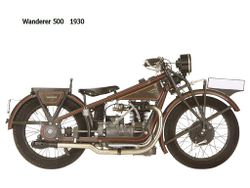 Founded in 1902, the German firm Wanderer built many singles and twins, some of which were used by the German Armed forces in the First World War. Janecek of Prague built the Wanderer under license, and in 1929 became the sole manufacturer as Janecek-Wander, later shortening the name to Jawa.

The German Wanderer concern traced its origins to a cycle shop located in Schonau near Chemitz which in 1885 was registered as the Wanderer Fahrradwerke AG with Johann Winkelhofer and Richard Jaenicke at the head. During the latter years of the 19th century the firm diversified into the production of typewriters and machine tools in addition to the production of high quality touring cycles. During 1902 Wanderer followed the path being followed by many other cycle manufacturers and introduced their first motorcycle establishing a tradition of producing well designed, high quality machines that would last for nearly three decades and see them compete in competition with riders such as Schuster, Urban and Ebert. The first motorcycle produced featured a single cylinder engine rated at one and half horsepower and was quickly followed by two vee twins displacing 408cc and 616cc of Wanderer's own design.

These machines formed the basis of the company's output through the early years of the twentieth century, benefiting from continual development and refinement to the extent that they were still in production in 1924 and had seen extensive use with the German armed forces during the First World War.

1924 saw the introduction of two new engine designs, both of which were technically advanced. A small, horizontal single cylinder unit displacing 184cc with overhead valves and a new vee twin offered initially with a capacity of 708cc with four valve heads being joined later by a 748cc variant with two valve heads producing 20bhp at 4,000rpm. Beautifully engineered the 748cc variant quickly earned a reputation for durability and good performance although the 708cc four valve version was less successful suffering from over heating problems resulting from small fins on the cylinder head. Both models were very expensive due to their hand built nature, (Wanderer employed their own threads, adding to the cost when new and making them difficult to restore today) placing them financially out of reach for all but the most affluent enthusiast. To address this Wanderer introduced a new 498cc unit construction over head valve single with shaft drive housed in a pressed steel frame during 1927. The new model was not enough to save the company, which in the face of declining sales and the turbulence of the Weimar Republic's economy prompted the sale of the design to the newly formed Jawa company in Czechoslovakia. Limited production of motorised bicycles continued in agreement with NSU until 1944 but the glory days of the Wanderer marque were past.