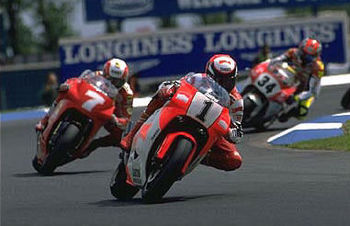 Fifteen years before the Valentino Rossi era, Yamaha previously dominated the blue riband class with Wayne Rainey and his name will forever be linked with Yamaha's dominance of the 500cc two-stroke class during the early 1990s.

Born in Los Angeles on October 23rd 1960, Wayne was the eldest of three children. His father, Sandy Rainey, was a go-kart racer who later began working on motorcycles. The two-wheeled bug soon bit the young Wayne and eventually he would ride and race the dirt-track bikes that his father prepared. Through the dirt-track championships, Wayne eventually took up road-racing, winning the 1983 American superbike championship.

A year later and Rainey entered GPs for the first time as a 250cc rider in a team set-up by his friend, mentor and fellow Yamaha-legend Kenny Roberts. He did well for a rookie, claiming a lap record, a pole position and a rostrum finish on Yamaha TZ250 machinery which was fairly standard, but with no more GP offers he headed back to the United States.

After being runner-up in 1986, Wayne finally re-took the American Superbike title in 1987 before re-joining the Yamaha family for the next season - this time in a factory 500cc team armed with the latest YZR500s. 1988 would see Wayne's debut 500cc win - at Donington Park in Great Britain - and eventually third in the title hunt. Impressive enough for a rookie, but this would set the scene for Wayne's amazing consistency.

The following year would see Rainey in the hunt for the title in only his second full 500cc year, but - despite his amazing consistency of 13 podium finishes including three wins - Eddie Lawson would take the title.

1990 would be the year it all came together, when his seven wins would see his domination and trademark consistency take the title, but Wayne was so driven to win, even the title didn't quench his appetite for success. He said later: "When I crossed the line and I was World Champion I had this burst of emotion. I felt great, for about two tenths of a second, then it was gone. It left me feeling really disappointed."

The title was retained in 1991, although this time it was a harder battle, against Mick Doohan. The following year saw the last of his titles come against the odds following Doohan's early season lead. 1993 was becoming a titanic battle between Kevin Schwantz and Wayne for the title but tragedy struck at Misano, in Italy. Ten laps into the 30-lap race which Wayne was leading, he crashed into Misano's turn-one - a 130mph right hander. The accident left him paralysed from the chest down, but he fought back straight away, turning up at the 1994 Australian GP for a hero's welcome, he eventually ran a factory Yamaha team for four years until 1998 when he quit racing.

Statistics show that the Californian won a total of 24 wins in the 500cc class, taking three back-to-back titles in 1990, 1991 and 1992, but his influence went much further than that.