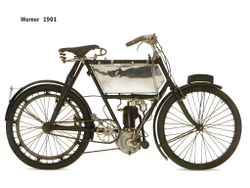 Werner was founded by two brothers, born in Russia, but living in Paris, Michel and Eugene. Their first motorcycle a 217cc single started production in 1898 and was very light and practical causing it to sell well. The most notable model was their 1901 New Werner whose layout, with the engine set low in a diamond-style bicycle frame, greatly improved handling and set the pattern for years to come. Unveiled at the 1901 Cycle & Motor Show in Paris, the “New Werner” is one of the early motorbikes to have its engine mounted in the lower part of the frame (most motorcycles since then use this engine placement).