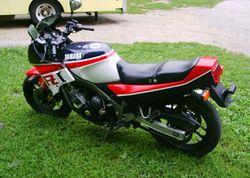 The Yamaha FZ750 is a sport class motorcycle that was produced by the Yamaha Motor Corporation between 1985 and 1991. The FZ750 is notable as it was the predecessor of the highly successful Yamaha FZR1000

Yamaha released the FZ750 in 1985. The bike was popular, and competed well against others in the "sport" class of motorcycles. The machine was noticeably narrower than many contemporaries, Yamaha achieved this by placing the alternator behind the cylinders instead of the more normal position on the end of the crankshaft.

The FZ750 uses a four cylinder in-line layout and is liquid cooled. Twenty valves are operated by chain driven double overhead camshafts, valve clearances are adjusted using shims. The four constant velocity carburettors are mounted in a bank behind the cylinders and feed each cylinder through short intake manifolds. Four exhaust downpipes join a box below the engine where the gases are split to exit through two silencers. The crankshaft is geared directly to the clutch, no counter balancer shaft is used. Starting is by electric starter only. Lubrication is wet sump using a trochoid pump.

The FZ750 uses a six speed sequential close ratio gearbox, the gear shafts are only removable by splitting the crankcases. The clutch is of the wet, multiple-disc diaphragm spring type and is hydraulically operated. Final drive is by O-ring chain and sprockets. A safety feature of the FZ750 is that the engine ignition is cut if first gear is selected with the sidestand down, this is commonplace on modern motorcycles.

The frame of the FZ750 is manufactured from mild steel box-section and uses a perimeter layout, the fairing and upper rear section use separate cylindrical tubing sub-frames. The rear shock absorber is placed vertically behind the engine and connects to an extruded aluminum alloy swinging arm via several forged aluminum rocker arms. The 16 inch front wheel is held between spring and oil damped forks. Later models of the FZ750 used a 17 inch diameter front wheel. The FZ750 uses twin ventilated disc brakes for the front wheel with a single ventilated disc at the rear.

The FZ750 features a standard 12 volt electrical system. The alternator and starter motor are mounted behind the cylinders. Yamaha's self cancelling indicator unit is used and a variable resistance gauging system is used to monitor engine oil contents with associated warning lights. Nippondenso Transistor Controlled Ignition (TCI) is used in conjunction with two coils.

The Yamaha FZ 750 was voted the best 750 cc Super Sport bike. The FZ 750's chassis was designed to complement the engine layout but was conventional, based around a frame of square-section steel tubes, rather than the aluminum of Suzuki's GSX-R 750. Front forks were air assisted, and like most sporty set ups at the time, held a 16-inch front wheel. Rear suspension was by vertical monoshock.