The engine was a liquid cooled single cylinder, four-stroke. A 38.0mm bore x 43.6mm stroke result in a displacement of just 49.0 cubic centimeters. Fuel was supplied via a single overhead cams (sohc).

The bike has a automatic transmission. Power was moderated via the dry centrifugal automatic clutch. 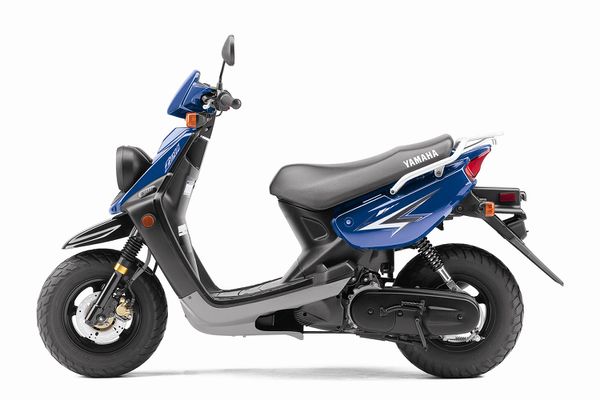 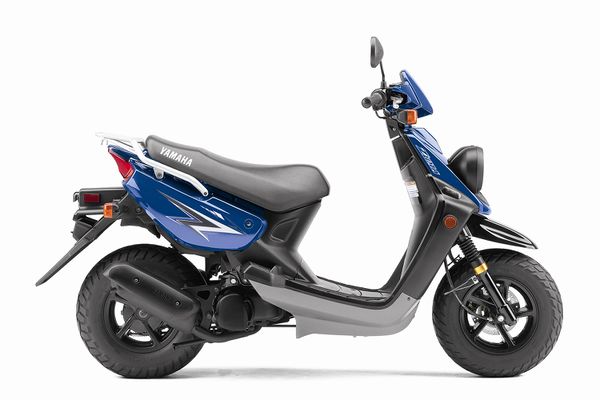 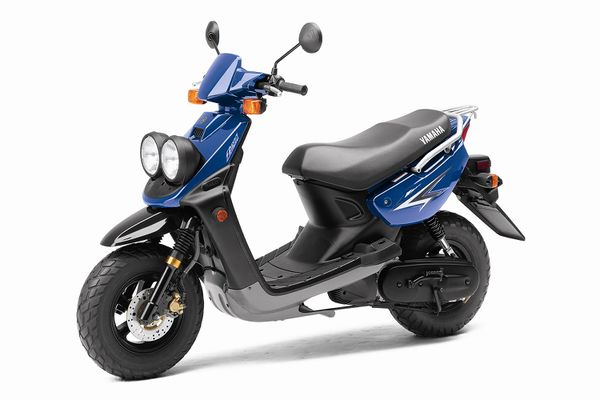 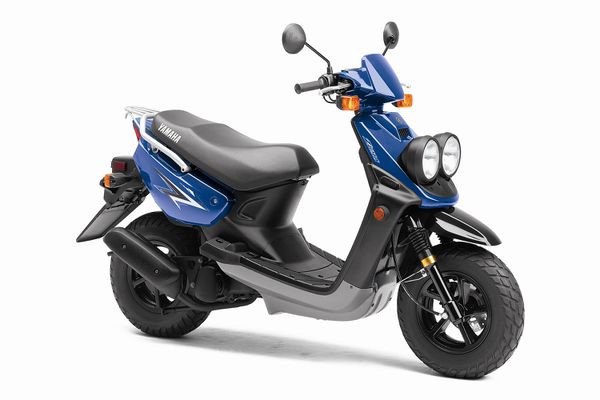 The 2011 MY Yamaha Zuma is the little brother of the Zuma 125 and sports a 49cc air-cooled 2-stroke engine. This scooter comes with the family-s distinctive fat tires offering good grip on pretty much any surface, rendering it suitable for daily commuting and for some off-the-road fun, too.

Its automatic choke makes cold starts easy, especially with the electric engine start. As a backup, the 2011 MY Yamaha Zuma also has a kickstarter. The generous underseat storage makes the Zuma usable for small shopping, as well.

Like most other scooters in the same class, the Zuma is a twist-and-go machine, sporting single-speed automatic transmission for an even easier operation. 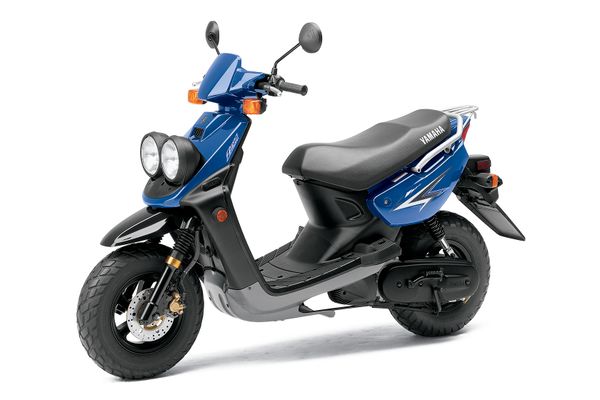 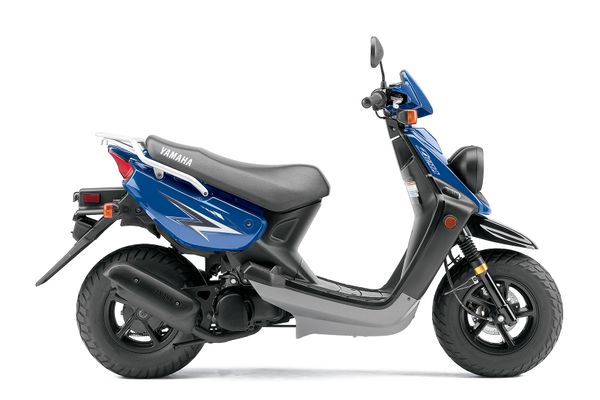 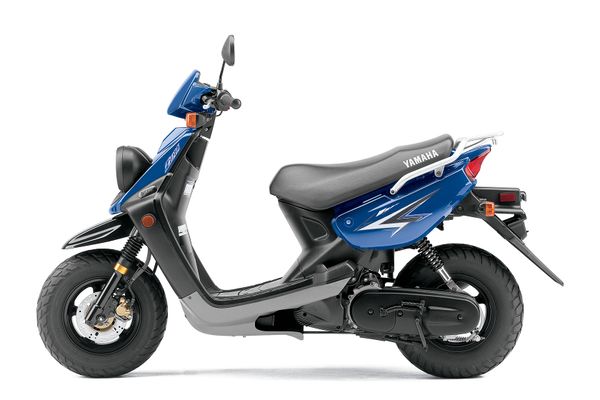 A sport utility vehicle, a really trick scooter and at the same time, a very cool economical commuter, the 2011 MY Zuma 50 blends fun and practicality in a package that's engineered to surprise a lot of people. This 50cc-class machine is equipped with a strong steel frame, chunky dual-sport tires, an automatic transmission and electric starting, a catalyst-enhanced exhaust and powerful dual headlights.

Riding it will be as much fun in the city as it will feel reassuring on the paths beyond the point where asphalt ends. If a dual-purpose scoot that can do almost anything is your goal, here's it one of the worthiest solutions. 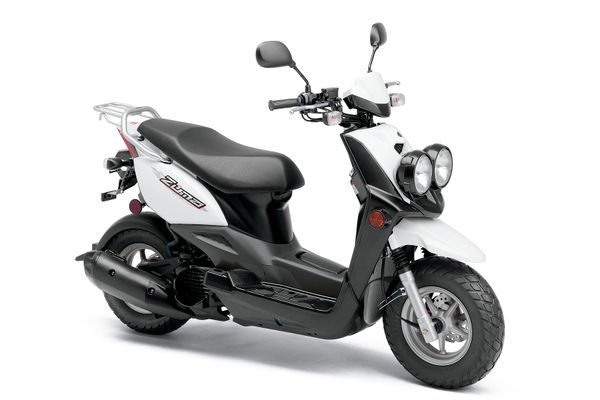 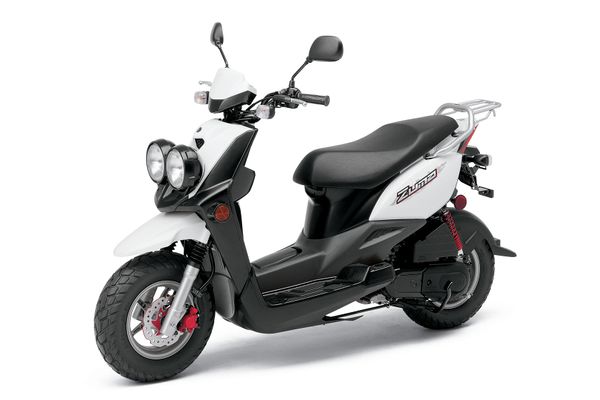 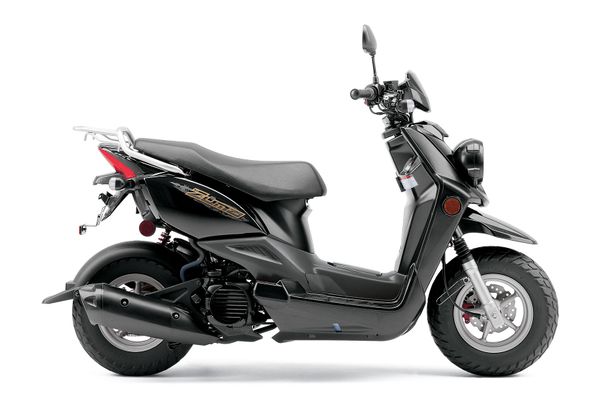 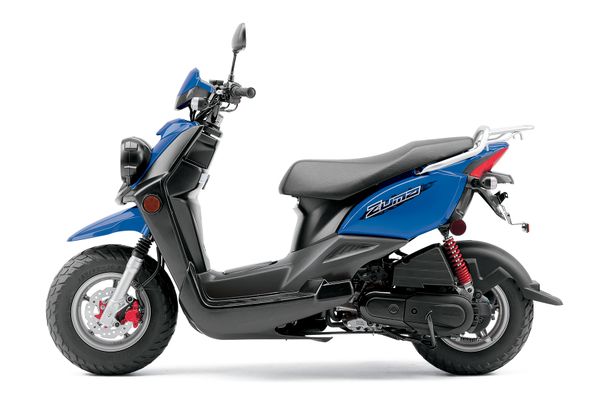 Zuma 50 fans rejoice as the 4-stroke version has finally arrived. One of Yamaha's best-loved scooters has just gotten more attractive, while retaining all the character which has made so many riders enjoy it. The Zuma 50F is still the same dual-purpose machine, with a rigged frame which can take on rougher roads, rolling on beefy knobbies and ready to provide a swift getaway both in and around the city,

The scooter is now powered by a 4-stroke version of the 49cc engine, fed by an EFI systems and with a centralized fuel tank for optimal weight distribution. Available in Raven, Team Yamaha Blue/White or Alpine. 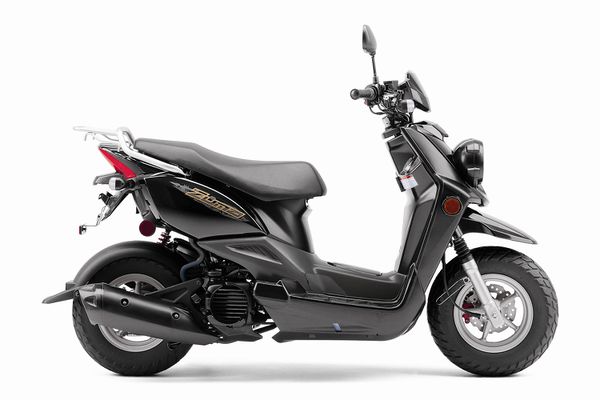 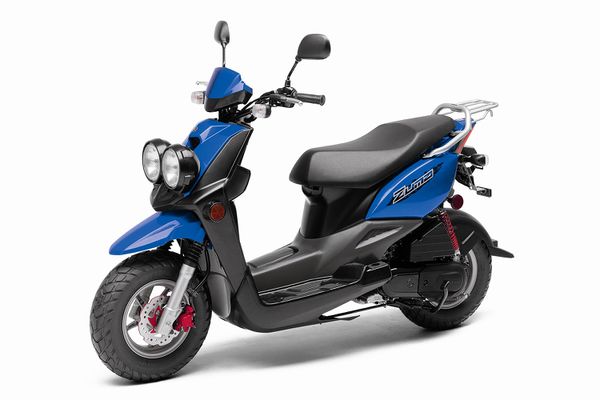 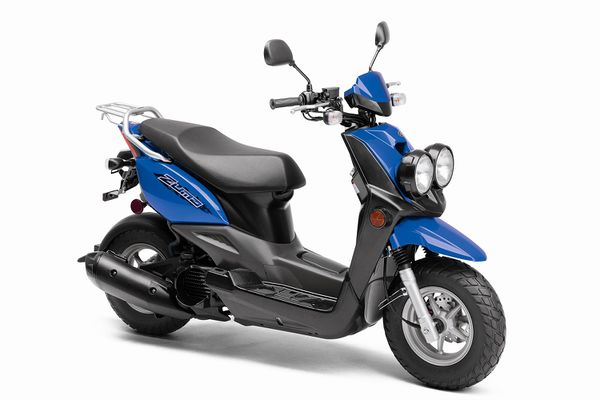 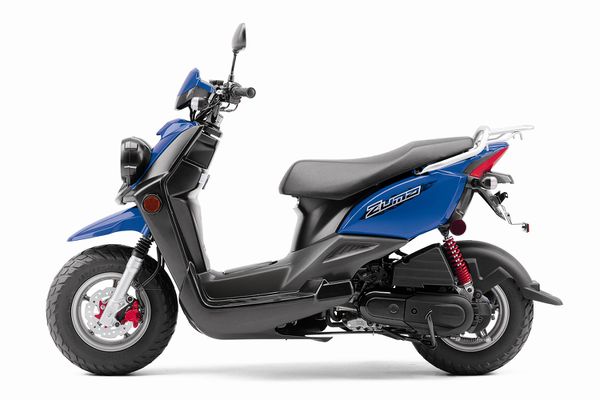 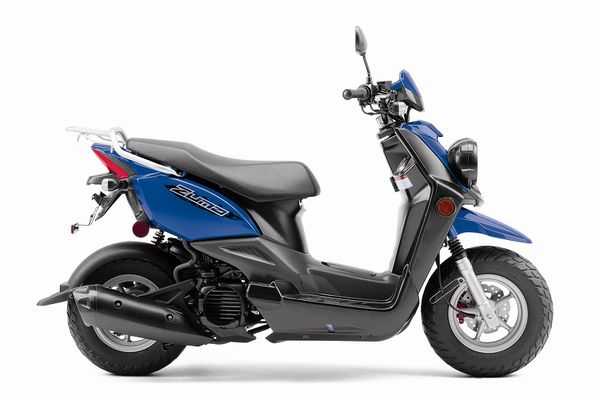 The F-suffix in the all-new 2013 MY Yamaha Zuma 50F stands for 4-stroke. This new model boasts the same awesome mileage and traffic capabilities, no matter whether you're commuting, going to school or doing some small shopping.

The new model retains the acclaimed fat tires fit for both asphalt and unpaved roads and the generic sporty and off-road look, while the unmistakeable Zuma dual headlights are there,a s well. Electric start and single-speed automatic gearbox and transmission make using the Zuma 50F easy and convenient.

A large front brake disc ensures you've got enough stopping force at hand when needed, while the handlebar can receive a lot of customization, thanks to its motorcycle-type design. The under-seat trunk is large enough to hold an XL full-face helmet or help you with your shopping. 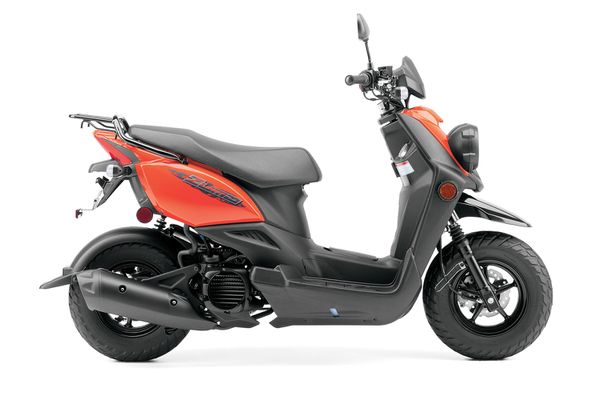 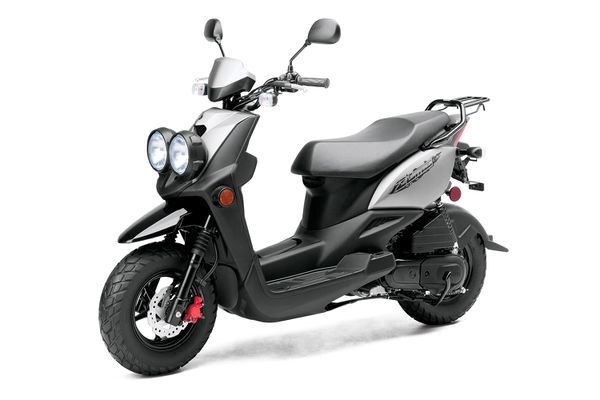 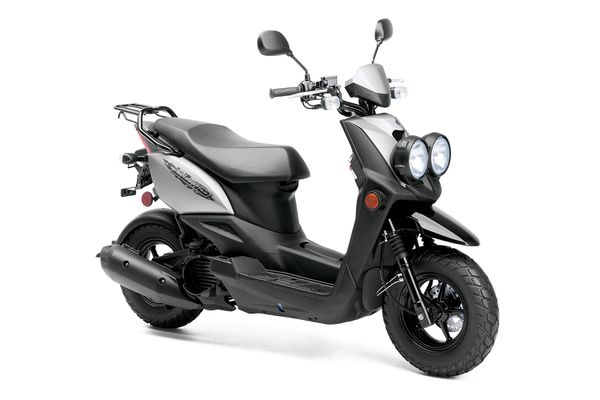 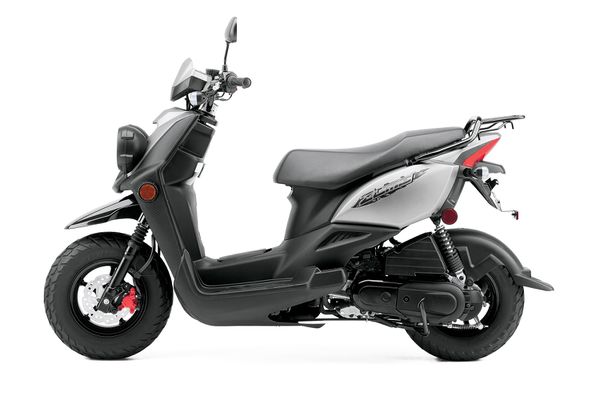 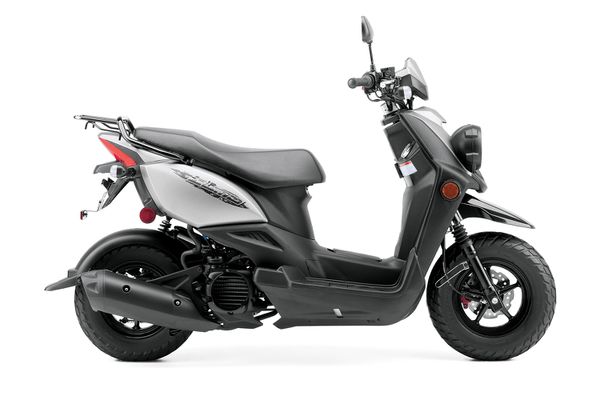 Tough just like its bigger 125cc-class brother, the 2014 MY Yamaha Zuma 50F also boasts on a 4-stroke 49cc highly-capable engine which makes this two-wheeler great for both commuting and zooming around the city. Even more, as the 50F inherits the chunky, fat tires of the bigger version, it's only natural that it can also perform well on unpaved roads, adding even more fun to life with weekend trail adventures.

The automatic transmission makes it easy to use and with the fuel-efficient engine, a full tank will last, and last, and last. Solid 42mm forks add to the ruggedness of this machine and with an 180mm front wave rotor, Yamaha also makes sure the scooter has enough stopping power. Underseat storage can hold an XL full-face helmet so there's plenty of room for small items on your shopping list.