The ATK 125 2-Stroke was a liquid-cooled, two-stroke, single cylinder Enduro motorcycle produced by ATK in 2003. 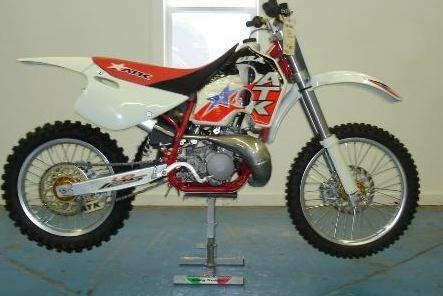 The 2003 MY ATK 125 2-Stroke mainly addresses riders who prefer the unmistakable sound and feel of a two-stroke engine. At its heart lies a liquid-cooled, two-stroke, 125cc, single cylinder engine mated to a six-speed manual transmission. In addition, it comes standard with off-road enhancing features such as laced wheels with knobby tires mounted on them, front and rear disc brakes, a telescopic front fork and a monoshock rear suspension, a large, 14-liter (3.7-gallon) fuel tank, plus a race-derived livery.