The ATK 250 was a liquid-cooled, two-stroke, Rotax single cylinder Enduro motorcycle produced by ATK in 2003.

==Overview The introduction of ATK's liquid cooled models in 1995 generated considerable interest for the US's only dirt bike manufacturer. Initial reports said the water pumper motor was a rocket ship, a worthy compromise to ATK's long term commitment to building simple, reliable, easy-to-maintain (yet slow) motorcycles. We soon discovered that the motor performance, as well as the entire bike, are quite the dichotomy, coupling innovative features that foster excellent performance with other traits that leave you wondering why. Not surprisingly, this has led to vastly divergent impressions of the overall package, as the ATK has generally not faired well in the press. This dichotomy, coupled with the inherent peculiarities of the no-linkage chassis, served to increase time and effort needed to get things dialed in. It took longer than usual to properly set up the 260LQ. That's perhaps why, at least in part, all of the other tests or reviews panned it unmercifully. Truth is, our first couple of rides on the 260 weren't much different. Stiff suspension action and questionable power had us wondering what we had got ourselves into. However, rather than whining and shoving the LQ into a dusty corner, we gave it a chance, taking the time to figure things out and dial it in proper, the end result being a competitive, raceable mount with a distinctly different performance envelope. In the case of this ATK260, patience truly is a virtue.

We finally got our chance, taking delivery of a new '96 260LQ this past April for a long term test on our own East Coast turf. The good news is that the ATK LQ models come stock with some of the finest hardware you'll find anywhere, short of a factory works racer. Additionally, ATK will practically custom build the bike for a particular customer, adding or removing options to suit, swapping gearing or tires, etc. This impressive list of trick features includes Talon billet hubs front and rear, DID O-ring chain, Talon/Answer Radialite rear sprocket, Pro Taper handlebars, the latest WP fork with high and low speed compression damping, WP rear shock, shroudless 3.1 gallon fuel cell, machined billet triple clamps, quality Dunlop tires front and rear, and an innovative vacuum-actuated, adjustable power valve. Our scoot was also outfitted with the optional enduro headlight and tail lamp.

While the ATK literally reeks of quality custom hardware, it unfortunately has its share of warts too. For the most part, these are features that basically require further "refinement" to improve performance and longevity. Near the top of that list is the thin gage steel used on the frame (for tabs, gussets, etc.) and swing arm. This allows many mountings (fenders, side covers, etc.) to flex or bend out of shape, giving the bike an overall weak and vulnerable look. Older ATKs used to come with trick-looking utilitarian chromoly swing arms--what happened? Speaking of vulnerable, the pipe sticks out like a neglected hernia to the front and right side of the motor, begging to be mashed. Similarly, the chain guide is a disaster waiting to happen, constructed from thin gage aluminum that won't stand up to hard pack ruts, let alone rocks. For the most part, everything can be fixed, its just a matter of deciding where to start.

As usual, our testing regimen included riding and racing the ATK in a variety of terrain, from the sands and swamps of South Jersey, to the Maryland loam and Appalachian highlands rocks. We started off by leaving the bike stock and made changes and refinements as circumstances dictated. First impressions almost always start with the motor, the ATK being no exception. The Rotax powerplant is slightly under square with a 69.8mm stroke and 67.75mm bore (67.5mm for the 250). Straight from Utah, the motor starts easily in spite of a smallish 125 sized kickstarter and quickly achieves a nice steady idle. The head has an integral thermostat, facilitating motor warm-up. The motor uses a Mikuni TMS 38mm carburetor, which is the pilot-less model that surfaced some years back. Factory jetting uses a 350 main, the double tapered 6DGY4-56 needle with the clip in the #2 position, a "G" slide, and the air screw set 1.5 turns out.

In this state of tune the motor ran well, except for a deceptive leanness discovered on the top end. Deceptive because there was no overheating, pinging or rattling. We solved this by bumping the main to a 370, which now provides good performance throughout the power band. Sound abatement is handled by a lengthy extruded aluminum silencer (without spark arrestor). The exhaust note is acceptable, perhaps a bit noisier than the KTM or Husky 250, but still less than any closed-course 250. Large capacity radiators never spewed a drop in defiance of our worst abuse. The motor employs a vacuum-actuated adjustable power valve that uses exhaust gas pressure against a variable spring tension to effect valve opening timing. An external plastic cover located just above the head pipe permits the adjustment, using a threaded plastic plug that can increase or decrease the spring tension. Standard position is with the adjuster nut flush with the power valve cover, with two full turns of adjustment possible in either direction from the standard (flush) position. Turning the adjuster out decreases the spring tension holding the valve closed, thus allowing the power valve to open sooner. Conversely, turning the adjuster in increases spring tension and holds the power valve closed longer.

With the above jetting and the power valve in the standard position, the motor is a real sleeper, with practically no grunt off the bottom, a decent midrange and fair top end runout. The lack of bottom end was really frustrating in high-traction sand conditions, as the motor resisted getting into the more powerful midrange, despite repeated clutch feathering. Like lower horse power bikes (read: 125s), proper gear selection was imperative.

Our first attempt to get some bottom end out of the motor started with a gearing change. The 260 came to our doorstep with a 15 tooth countershaft sprocket (despite the claimed 14/48 stock gearing). We procured a 14 tooth sprocket and were disappointed to find that gobs of bottom didn't instantly materialize, and now we had to shift a whole lot more, to boot. Next step was power valve fiddling. According to the owner's manual (and conventional wisdom), decreasing the spring tension would allow the power valve to open sooner, improving throttle response at low speeds. We cranked the power valve adjuster screw out the full two turns and prepared to have our arms yanked out.

Conventional wisdom be damned, this yielded a motor with no discernible bottom end and a very electric power delivery throughout the rev range. Instead of getting a stump pulling farm implement, we ended up with a blender on two wheels. This proved very effective in the slimy mud and sharp rocks of this year's snotty Ridge Run Enduro, but still didn't provide the desired effect. Coincidentally, the 260's pipe bit the dust big time at the Ridge, the victim of a high speed slide through a rock garden, so we used that opportunity to try one of Rich Daily's Dyno Port torque pipes for the ATK. Now we were on the right track, as the Dyno Port pipe provided a marked improvement in low end, however it was still nowhere near the output of most other enduro 250s.

We tried raising the needle to see if a little more fuel would get things kicking, but this resulted in a blubbery output that hinted of plug fouling. Finally, we bucked conventional wisdom and adjusted the power valve for maximum spring tension, two turns in from the standard position.

Surprisingly, this resulted in a distinctive improvement in power at low RPM, providing more bottom end grunt and facilitating the transition into the midrange. This state of tune is a nice compromise between the raw berm blasting power needed in high traction situations and the friction hunting finesse needed for slick mountain rocks.

Are we totally satisfied with the motor now? Yes and no. Clipper ran the ATK up in New Hampshire this past weekend and came back raving about the perfect power delivery. For rocks and the slick stuff, this is it; this is the bike. Most agree, however, that South Jersey sand will still demand a little more punch. We're at odds where to proceed next, however, the engine's specs list a seven to one compression ration for the Rotax powerplant, significantly lower than most other dirt two strokes. Perhaps some head work to increase compression will spice things up. Another possibility are intake tricks, a switch to a RAM valve and some aftermarket reeds. These projects are underway and we'll keep you posted. 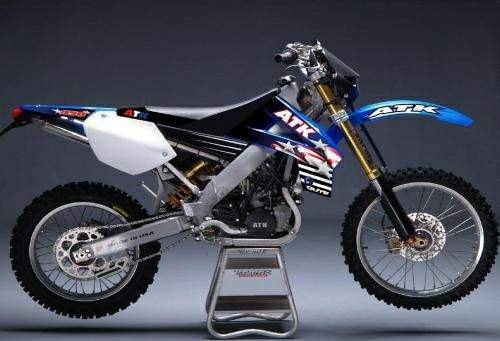 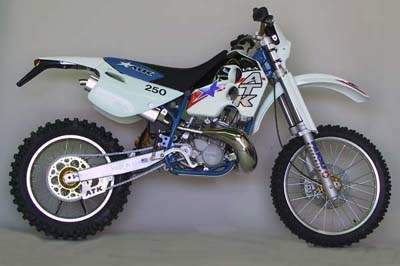 The 2003 MY ATK 250 has, at its heart, a liquid-cooled, two-stroke, 249cc, Rotax single cylinder engine paired to a six-speed manual transmission. In addition, it boasts race-derived features such as 46mm Paioli front forks, an adjustable Ohlins shock as a rear suspension, laced wheels with aluminum rims and knobby tires mounted on them, a race-inspired livery, a digital instrument cluster, front and rear disc brakes, plus a high-mounted exhaust.