Power was moderated via the Wet, multi-disc. 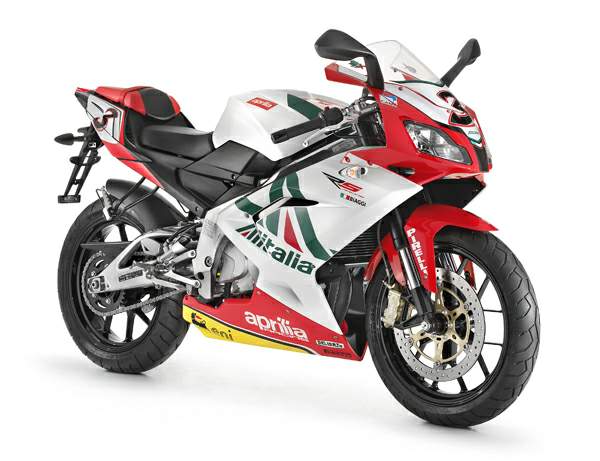 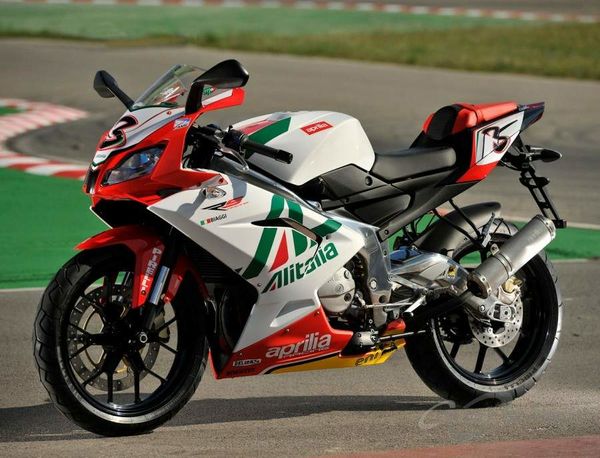 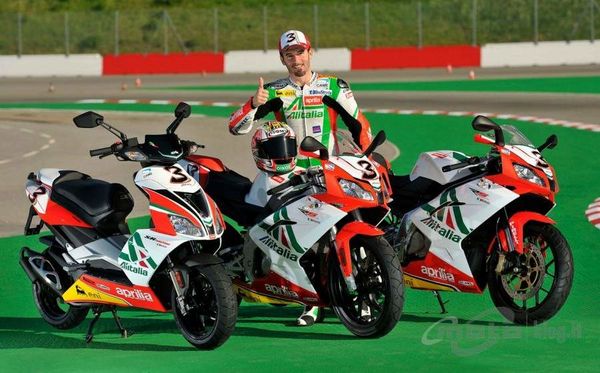 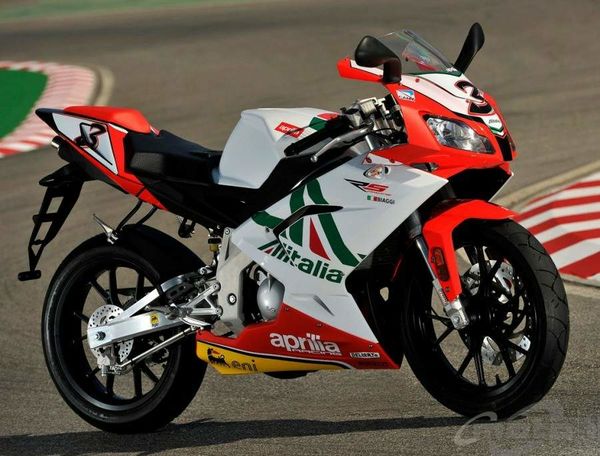 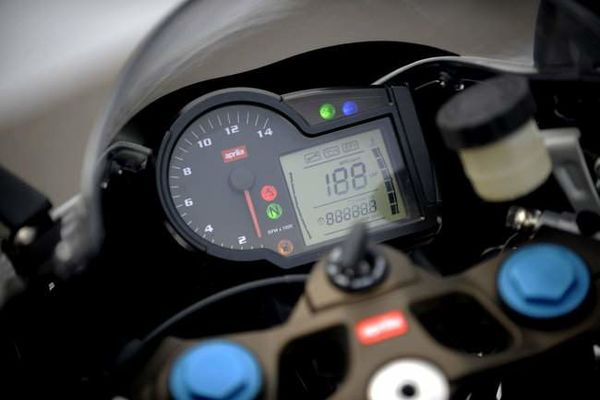 Max Biaggis World Superbike colors are to be offered on a trio of lower capacity bikes including the RS50, RS125 and SR50 scooter for 2010 Aprilia has announced.

The Aprilia Alitalia WSB Racing Team livery has coloured a number of successes for Biaggi in 2010 and now teen wannabes can mimic the Italians style.

The 200bhp RSV4 Biaggi replica announced in 2010 was the first to bring the distinctive livery from the racetrack to the street, and these three new models will broaden the appeal.

Aprilia RS 125 owes much more than its graphics to the race world - it is a genuine race replica for budding young riders, encapsulating all the technical expertise of the Noale based marque in the one-eighth litre class.

Over the years, RS 125 has earned a reputation as a benchmark for 2-stroke sports motorcycles which continues to receive public and critical acclaim in the most important European markets and is still today the bike of choice for riders competing in Sport Production races. Confirming this remarkable success, in 2009, the Aprilia RS 125 was voted Bike of the Year in its category by the magazine "Motociclismo" and nominated Best 125 of 2009 by the specialised magazine "In Moto" following a referendum held among the readers of 12 specialised publications representing 12 European nations.

Aprilia RS 125 boasts class beating componentry and mechanicals, such as the powerful and reliable single cylinder two stroke engine which, over the years, has earned a reputation of being unbeatable in terms of both performance in the race track and reliability on the road. The compact, ultralight RS 125 is a concentrated package of sophisticated technology: the frame and swingarm are both derived from Moto GP experience and made from ultra-stiff aluminum. An upside down front fork, the front brake with radial caliper with four, horizontally opposed pistons and the wheels with split spokes are testimony to the bike's overtly racing character. Other unique features for the RS 125 include an analogue/digital instrument panel complete with multifunctional computer, a forged steering yoke and an oval racing silencer with riveted end caps.

The mean, cutting edge look of the new RS 125 tells you that this is a professional racing machine. The styling of the RS, like that of all Aprilia sports bikes, is the result of painstaking aerodynamic research.

The fairing, for example, was perfected by extensive wind tunnel testing, to guarantee great wind protection and minimum drag for maximum racetrack efficiency. The fairing, windshield and tail not only look mean and aggressive, but allow the RS 125 to reach a blistering top speed, eliminating all turbulence around the rider and allowing man and machine to become one.

The latest generation twin halogen headlight also adds to the mean look of the new RS 125, and delivers a high power light beam for enhanced visibility and safety at night. The sleek tail looks exactly like the tail of a GP racer. Thanks to the effort put into the design of the RS 125s tail, not even the passenger seat disturbs the bikes impeccable lines.

The crossed spoke wheels are not only lighter and more stylish, but safer and more reliable too.

The powerful but reliable, single cylinder, two stroke, Rotax-Aprilia engine needs no introduction. Over the years it has won a reputation for being unbeatable on the track and dependable on the road.

Still today, this engine boasts technical solutions that are state-of-the-art for two strokes, including a crankcase reed valve intake, liquid cooling, an anti-vibration balancer shaft, and an automatic mixing system. The RS 125s engine has been constantly updated over the years to keep in line with the latest emission control legislation without penalising performance. A catalytic converter and precision carburation has won Aprilias single cylinder two stroke homologation to Euro 3 standards. And the amazing thing is that this has been achieved without losing out on performance: the Aprilia RS 125 engine remains the reference point for all 125 cc powerplants.

Without a doubt, the most advanced single component on the RS 125 is its frame. Developed from Aprilias vast experience in GP 125 racing, the RS 125 frame is made from cast aluminum alloy with cross-ribbing reinforcement. Despite its extremely light weight, this advanced structure achieves amazing torsional rigidity, setting the standards for Aprilias competitors.

The box section, aluminum alloy swingarm has the highest torsional rigidity of all production 125 cc swingarms. Differential side members enable the exhaust to follow a path that maximises engine performance and enables more acute angles of lean to be achieved on bends without risking dangerous contact with the asphalt.

The suspension too plays a fundamental role in ensuring not only the RS 125s performance, but its safety and comfort too. The RS 125 can rely on an upside-down fork that has been optimized for maximum performance on the racetrack while also delivering a more satisfying ride on public roads.

The rear suspension features rising rate linkages based on Aprilias 125 GP racing technology, for excellent traction and superb comfort even over uneven road surfaces. The hydraulic monoshock that provides the damping for the swingarm is also adjustable in spring preload.

Like any self-respecting supersport motorcycle, the RS 125 has to have the best when it comes to components. The braking system is the best available, and designed for maximum efficiency under competitive riding conditions. The front brake is a genuine state-of-the-art, high performance system with a radial caliper and four opposed pistons. In addition to the 320 mm front disc, the system also incorporates a radial master cylinder and aeronautical hoses for maximum precision and unrivalled braking power. The rear disc is 220 mm in diameter and is also equipped with metal braided hoses for perfectly balanced, high performance braking.

The Aprilia RS 125 is packed with prestige components. Compact and impressively light in weight, the instruments include an analog rev counter and a multifunctional digital display with an on-board computer that can be operated from the handlebars. The speedometer, rev counter, coolant temperature gauge and exclusive racing chronometer put you in total control. The on-board computer even has provision for interfacing with the optical finishing systems used on racetracks.

"As you accelerate the Single seems to gain momentum in protest. But as the rpms progressively increase, the engine begins to spool up quicker. That glorious 2-stroke braappp matches engine speed and as soon as the crankshaft spins to that magic 10,000 rpm, the engine springs to life and finally rewards its riders with some decent acceleration."  motorcycle-usa

"If you are of normal size and keep the little engine singing in its sweet spot, she has plenty of juice to see triple-digit speeds and embarrass riders on liter-bikes in the tight stuff. Top speed attained at MSR Houston was an indicated 108mph on the longest straight and still pulling;"  2wheeltimes

"The Aprilia RS125 is probably one of the best handling bikes on the planet. Its able chassis can easily cope with double the power. The Aprilia RS125s brakes are astonishing, particularly so on the 2006-onwards motorcycles, which boast a sexy radial caliper up front, and the forks are beefy 40mm items for greater control."  MCN

The Aprilia RS 125 can mark the beginning of a beautiful friendship between young riders and supersport bikes in general as the small two-stroke blast has all it takes to make one fall in love with quick acceleration and sharp handling, all in a user-friendly manner.