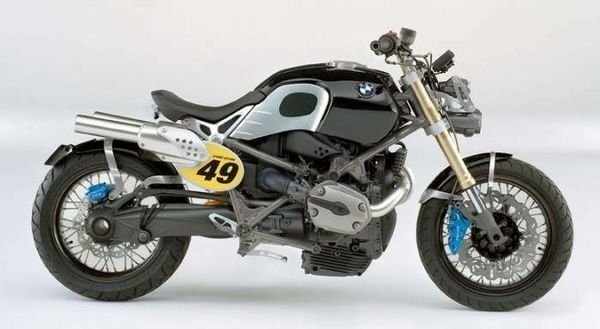 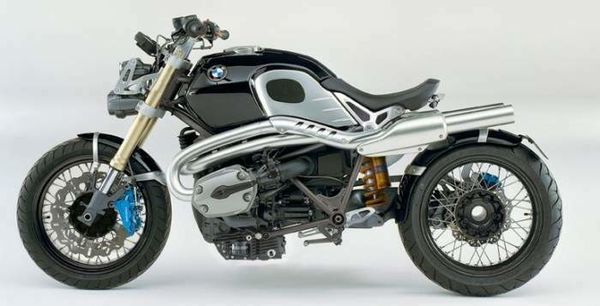 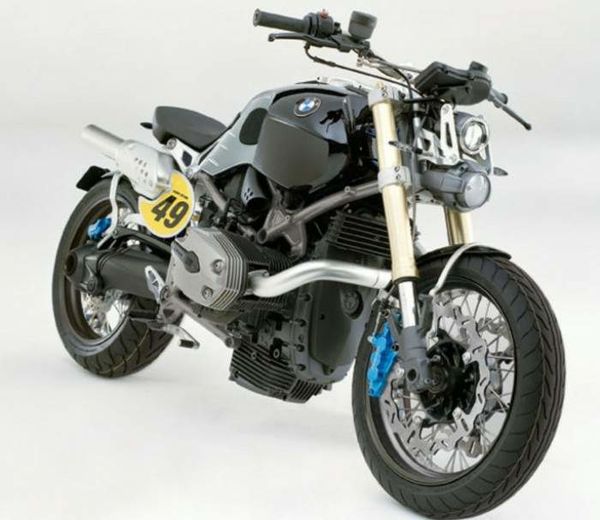 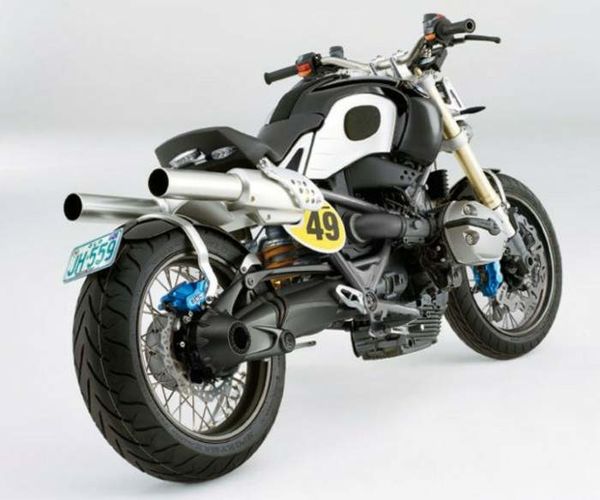 Purist, powerful, unfaired and reduced to the absolute essentials - these few words provide an incomplete description of the BMW Lo Rider, the new concept study by BMW Motorrad. At first sight, the focus would seem to be on the creation of a roadster with a muscular appearance, openly displayed technology and powerful flat twin engine for pure emotion and maximum motorcycling fun. But behind all this is in fact a completely new custom The bike's low weight, the powerful and high-torque flat twin engine and high-quality chassis technology give it a high level of sporty riding dynamics, while the lowered chassis and the relaxed yet active seating position with the broad handlebars are more of a loan from cruisers and naked bikes. The concept is such that, for the first time, the customer can be involved in the design of the BMW Lo Rider to an extent which goes beyond what has previously been possible to date. Numerous options including different exhaust systems, seats, headlamp units and paint finish variations allow for a level of customisation which is far greater than the familiar individualisation by means of special equipment features and accessories. This means that the entire character of the vehicle can be adapted to the customer's individual taste: the customer can take full pleasure in assembling a machine just as he wants it - from a cool cruiser to an aggressive muscle bike.

An overview of the conceptual highlights.

 Combines current technology with modern and classic stylistic elements.  Design elements can be individually combined by the customer.

The idea in detail. Leading the way with concept studies - a BMW Motorrad tradition.

BMW Motorrad has a tradition of coming up with new ways and ideas when it comes to motorcycling. Fascinating studies and designs have been produced in the past using ideas which then found their way into serial production. But studies by BMW Motorrad are about more than just trying to develop a motorcycle which has not existed in a given form before. In addition to functions and quality, BMW developers focus on the emotional component -the connection between man and motorcycle. The guiding principle is that a motorcycle should not just function perfectly but should also appeal to all the riders' senses simultaneously, arouse an emotional response in him and fill him with enthusiasm at every moment - when stationary and when moving, as a whole and in its detail. In short: it has to light the fire.

With the BMW Lo Rider study presented at the EICMA in Milan, BMW Motorrad is not just demonstrating a continuation of this policy but is in fact taking a significant step forward in focusing on the interaction between man and motorcycle. The idea is that for the first time, the customer should be interactively involved in the design of his BMW - going far beyond the familiar adding of special equipment features and accessories. The customer is to be given the opportunity to be much more deeply involved in the design of the Lo Rider from the outset, creating a customised, made-to-measure machine based around the principal components such as engine and chassis.

The study Lo Rider does not fit into any of the classic motorcycle segments -and it is not supposed to. It combines the latest technical attributes of high performance sports motorcycles with the traditional, classic principles of motorcycle construction. State-of-the-art chassis components from sports motorcycle construction such as the powerful upside-down fork, 6-piston brake calipers with real bite and wide 17-inch tires are combined with style-defining elements of motorcycle construction from the fifties and sixties. For example, with the exhaust system in a more traditional lower position in side pipe style creates a classic roadster or cool cruiser look, while a raised exhaust system is reminiscent of legendary racing machines or typical scrambler models of days gone by. Together with a range of variously designed seat concepts, also based on styles of the fifties and sixties, as well as differing paint finish versions, the BMW Lo Rider offers the motorcycle fan a wealth of possibilities by means of which to interpret the roadster theme in a highly individual way according to his own personal taste founded on a single basic motorcycle. In fact the Lo Rider gives the creativity of its rider almost completely free rein.

Chassis and engine - state-of-the-art technology based on classic principles.

The mixture of classic and modern stylistic elements of motorcycle construction combined with state-of-the-art technology is what gives the Lo Rider its defining look from all angles. A torsionally stiff space frame of sophisticated architecture openly displays the bike's technology and together with the upside-down telescopic fork at the front and Paralever rear-wheel swing arm provides the modern basis in terms of chassis technology - just as it is to be found in some current models of the BMW Boxer series. What is more, the chassis of the Lo Rider has been lowered as compared to conventional roadsters. In terms of tire dimensions, the 17-inch wheels represent the current state of the art for sports motorcycles, though with their chrome wire spokes, black hubs and steel rims they ingeniously echo the characteristic stylistic elements and flair of a past era. By contrast, contemporary technology and a high level of riding dynamics is provided by elements such as the high performance dual brake disk with powerful 6-piston calipers, together with wave brake discs borrowed from motor racing at the front and the single disc brake at the rear. In terms of its engine, the Lo Rider also relies on technology which is both contemporary and full of character - the legendary, highly responsive BMW flat twin "Boxer" engine. For 85 years, the construction principle of this engine has stood for unmistakable, authentic design, a full torque curve and unique sound and power. In its current version with an output of over 100 bhp, overhead camshafts, electronic fuel injection and exhaust gas purification, the powerful response of this dynamic and distinctive 2-cylinder is simply perfect for the BMW Lo Rider.

The customer as designer - individual designs and paint finishes.

The concept study Lo Rider is mainly focused on the two essential component groups of a motorcycle, the engine and the chassis. Any superfluous decoration is omitted. Instead, variable components such as the exhaust system, seat, headlamp unit and paint finishes determine the bike's outward appearance, at the same time defining its conceptual style. The combination of these classic and modern components is entirely subject to the personal taste of the customer. For example, he can initially express the dominating character of the BMW Lo Rider through the placement of the exhaust system, creating either a sporty style or opting for a more roadsterlike look by having it lowered. A very sporty effect is created by the classic perch seat made of aluminum sheet metal, while the simple single seat reduced to the absolute minimum will appeal to purist motorcycle fans. The single seat can also be optionally extended to include a pillion passenger module. The specification laid down for the development team led by David Robb, Head of Design Development at BMW Motorrad, was that all the conceivable combination options of these components should produce different end results but that the bike should always retain a rounded, coherent character in itself. Whether with a raised or lowered exhaust system, with sporty perch seat or seat bench for one or two people: the Lo Rider comes over differently every time but always makes an impression. The same applies to the selection options in creating the front section of the Lo Rider. With their aggressive, modern design, the vertically arranged dual headlamps give it a touch of the streetfighter, while the classic, semicircular headlamp provides an echo of past times. Once again, the same principle applies: however different the styles thus created might be, they always have a consistent emotional appeal for the rider. Further possibilities for individual design are available to the customer in the choice of paint finish. There are four different colors available for the fuel tank, and with the three different paint finishes for the engine casing this allows the customer to create a very distinctive, personal look, defining the character of the Lo Rider as anything from refined to sporty. These always harmonise perfectly with the deliberately classic, high-quality aluminum parts such as fuel tank trim, seat holder and wing struts. Different styles can also be created with the front and rear wings which are available either in black or chrome finish. Finally, another element which harmonises perfectly with the overall concept of the Lo Rider is the individually adaptable range of rider equipment. This includes classic leather jackets, protector jeans, boots, gloves and authentic jet and integral helmets. This ensures that not only the appearance of the Lo Rider is perfect but that the rider has just the right look, too.