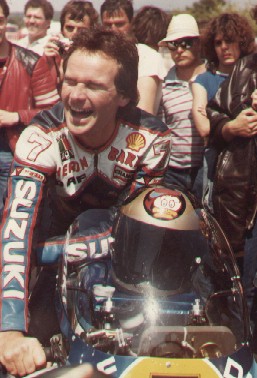 Sheen took after his ex-racer Dad, Frank, who also ran a successful tuning business. Sheene's debut was on a 125cc Bultaco at Brands in 1968, although he crashed out after suffering from a seized engine. As a result of his father's links with the Bultaco factory, he was fortunate enough to get a works ride the following season. Sheene purchased Stuart Graham's ex-factory Suzuki 125 cc twin and almost got the 125 cc world title, failing at the final round in Spain being beaten by Angel Nieto.

In 1972 he switch to Yamaha, without success but his luck changed when he switched to Suzuki as an official rider. However, Sheene suffered an horrific accident at Daytona in March 1975 while riding a 180 mph three-cylinder Suzuki. He made a speedy recovery and raced again 5 weeks later. In 1976 on a works Suzuki he won five out of ten rounds to take the world title. An amazing feat as he did not finish four rounds and runner-up at the other. The following year he retained the title by winning six rounds

In 1978 (2nd) and 1979 (3rd) he experienced some great races with Kenny Roberts, who won the titles both years. Sheene then raced with a Yamaha, sponsored by Akai but found that the privateer bike was no match against the works machinery. At the end of 1981 Yamaha offered Sheene a contract and he won the final round in Sweden and finished 4th in the title. In 1982 he suffered a further serious accident while practicing for the Silverstone British GP, again he recovered but failed to make an impact in the GP's. He officially retired in 1984 and emigrated to Australia

A true legend, 2 times 500 cc World Grand Prix Champion in 1976 and 1977 made famous for winning the GP 500 World title and also for two horrific crashes, but continued to race despite all obstacles. He will be sadly missed by all that were fortunate enough to remember his career.