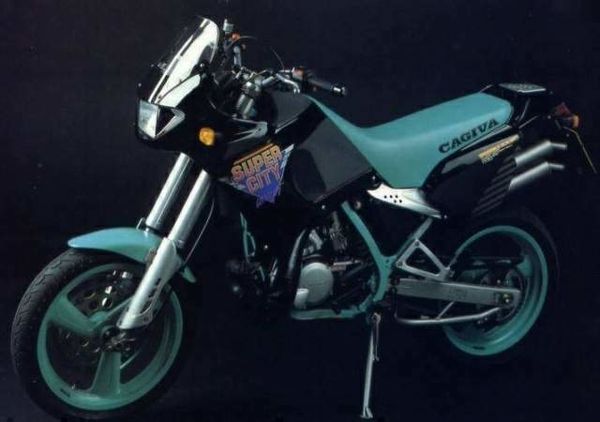 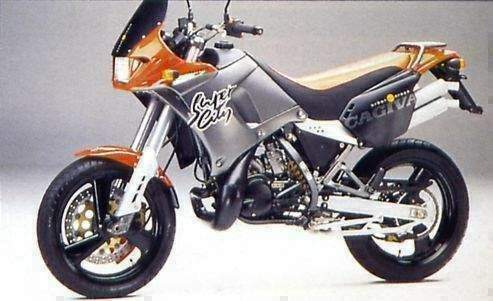 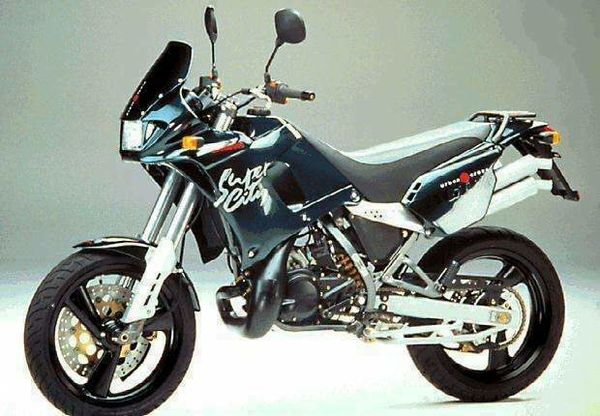 Yamaha TDR 125 vs Cagiva 125 Super City vs Aprilia 125 Pagaso IF YOU CAN'T HAVE A BALL on these bikes, you're dead. If you've never pulled a stoppie before, here's where you find out. And if you're not that kind of chap, 'absolutely dreadful behaviour.... shouldn't be allowed... gives motorcycling a bad name... rhubarb... rhubarb...' I suggest you complain to Mssrs Cagiva, Yamaha and Aprilia first. Cos there ain't no way these bikes were meant for anything less. These are the new mini-motards. Eighth-litre strokers with a devil-child attitude borne from an unholy marriage of motocrossers and road race scratchers. Lucifer lightweights with big fun extras: extra flash (for posing); extra brakes (for stoppies) and extra wring-ding for street-cross crazies keen to impress young ladies. For flush learners (they're not cheap) wanting a beastie, but surprisingly practical alternative to racer-reps, they're the biz. And for irresponsible adults, they're more lascivious fun than Luncheon Vouchers at Lindi St Clair's. The basic ingredients are simple: MX-derived chassis, single-cylinder motors, well-wicked styling and the hottest, grab-biest and stickiest brakes, tires and wheels you can imagine. The inspiration comes from super motard races like the annual Guidon d'Or (Golden Handlebar) at Circuit Carole, near Paris which pits the world's best road racers (Rainey, Lawson, Kocinski, Mamola etc) against top off-roaders and MX-ers around a half dirt, half tarmac track on what are, essentially, 500cc motocrossers with, yes, you've guessed, smaller, wider wheels, road race tires and beefed-up brakes. Mad as un peche.

Cagiva was the first to enter the fray when it unleashed the 125 Super City at the NEC Bike Show the year before last. It looked so hot then in its lime green and black paint, agape onlookers contracted melanomas. Its 150-section Pirelli MP7 rear tire, huge Brembo full-floater front disc, upside-down front forks and claimed 30bhp scared small children and seduced the hooligan psyche out of bigger ones. Aprilia's more trail-orientated 125 Pegaso followed at the end of last year and was rumoured to be even faster. And now, as if to confirm the creation of a fully-fledged new class, Yamaha has become the first of the big four Japanese manufacturers to build its own mini-motard. Enter the TDR. All three of these bikes have dual personalities. Each can be had in either learner-restricted 12bhp spec or, with Yamaha now too deciding to import its derestricted version of the TDR, as a full 30-horse screamer fit to terrorise any neighbourhood. Both the Aprilia and Cagiva, as tested, were full-power. But with the 28bhp version of the TDR not available until May, we were left with a be-learnered version of the Yamaha. That said, it still impressed massively. And wheelied too... just. WRINGING 30 HORSES or so from a piddly 125 is a take-no-prisoners, no-compromise affair. Its all or nothing, on pipe or off and it doesn't half make itself felt. With the tight, pokey Super City, playing-out time is strictly between nine and half past, between which this little buzz bomb is the noisiest brat in town: screaming and flying and with your left foot tapping faster than Lionel Blair. And, two rpm below nine, dying. This isn't so much Super City as serious power band city. 'Peaky' isn't the half of it and God only knows what it'd be like without its supposedly midrange-boosting exhaust powervalve. And life with the Cagiva, bumbling around with about 10bhp up to 9000rpm (well, it feels like it), sounding like a tin of marbles before suddenly screeching forward to the the rev-limiter at ten-five, is sometimes fraught, sometimes annoying but usually crazily addictive. Getting a decent launch means frantic clutch-slipping, not just in first but in second too. The gearbox has seven ultraclose ratio speeds but feels like it either needs nine or, on mushy downshifts, preferably as few as possible. The clutch is snatchy and, with the abuse asked of it by the engine's peakiness, you could do with a ready spare. Yet all of it is delivered in such a crisp, tight, parp-parp way that, for most of the time, you forgive its singlemindedness. And then you wring it some more. All this considered, we expected the Cagiva to be the quickest too. But we wuz wrong. After the crisp but still slightly tight, fresh-out-of-the-crate Super City, the more secondhand Pegaso came over as sloppy. The gearchange rattled, the throttle was light and loose and its revs flew up and down as freely as leaves on an autumn wind. All of which managed to disguise how fast (for a 125) the thing was actually going. Ninety-eight mph fast. And that, from a 125, from an unfaired, sit-up-and-beg 125 (even if, at the time, I was more tightly tucked-in than a hospital bed) is fantastically impressive. Like the Aprilia Sport-Pro is to the Cagiva Mito, the Pegaso's mill is chalk to the Super City's gorgonzola. Where everything is focussed, crisp and black or white-exact on the Cagiva  it's either on or it's not on  the Aprilia is looser all-round; greyer, mushier and, because of it, more flexible, more day-to-day usable, and it seemed quite happy to run fluidly right through into the red.