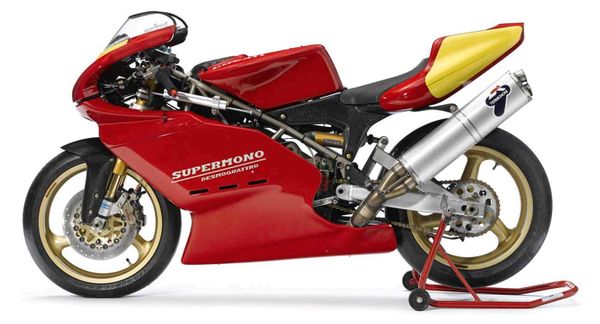 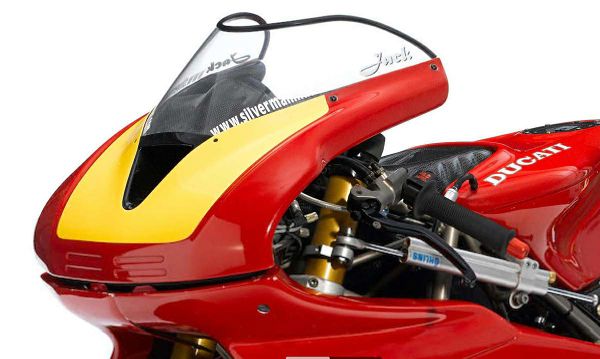 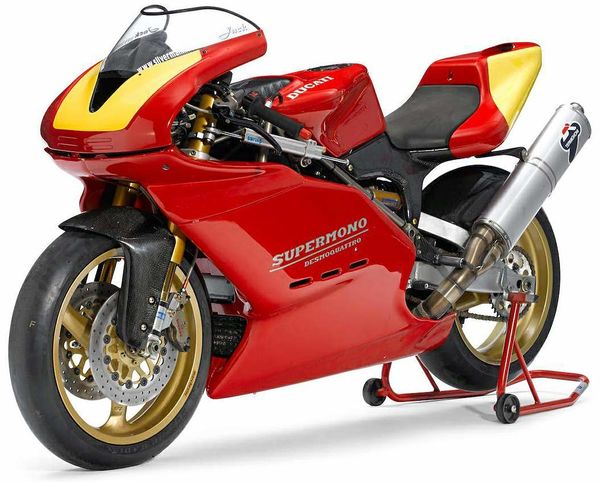 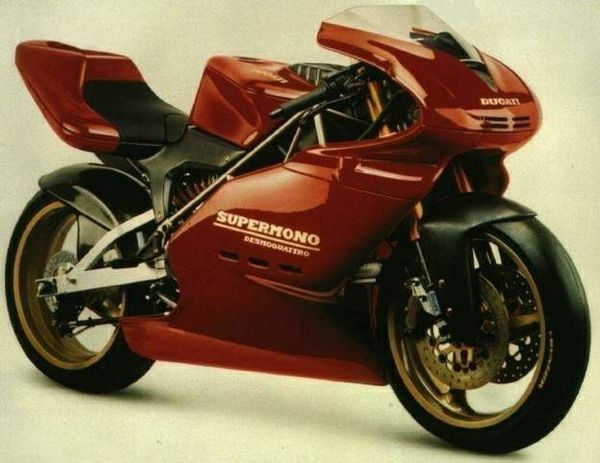 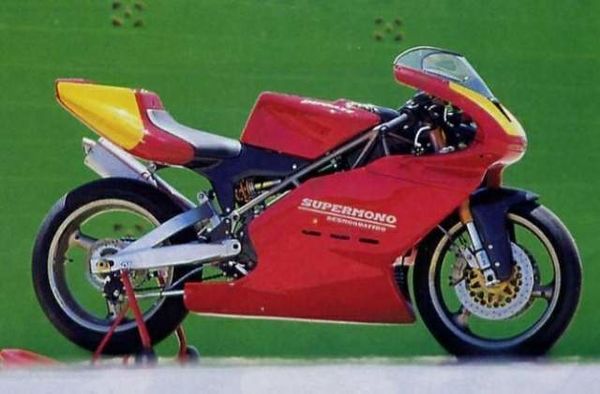 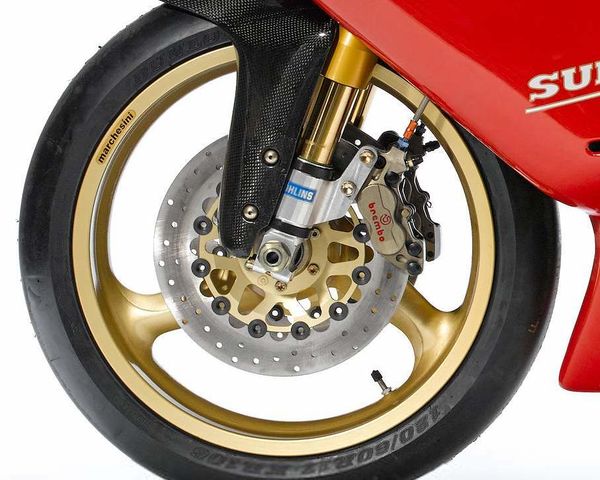 Riding the Sex Machine: Mono a Mano at Willow Springs By John Burns, photos by Jeff Allen So there you are, braking deepfork-bottomed, rear-tire-hopping deepdownhill into the fast left at Willow Springs Raceway. When the speed feels right, you ease off the binders and throw the bike in Hail-Marily toward the apex, your tires slither and grip, your knee rasps the asphalt, and you squirm toward the inside line with your inner voice saying, Captain, she'll na take much more a'this abuse. You think this is it, bud, this is the ragged-rubber edge right here.... And then something red flashes into your left periphery, on an incredibly tight trajectory at an impossible lean angle. The thing's rider scribes a line on the very inside edge of the track, lifts his left knee for just a second to avoid the desert, puts it ever-so-daintily down again on the pavement, and pulls away BWOOAAAAH, its mini-gun exhaust rattling your faceshield. The red thing flicks right and disappears over the crest of Turn 6.

It was an expert roadracer on a Ducati Supermono 550. You are a geek wobbler on a Yamaha FZR600. Back in the pits, the stopwatches tell the tale: One has Don Canet's fast lap on the Supermono at 1:30.5, another says 1:30.9. Either one is about 4 seconds faster than the official Willow Springs record for a single-cylinder motorcycle. And bear in mind that caution is the rule when aboard a borrowed $30,000 machine. The Supermono is a study in the art of carbon-fiber and magnesium. It weighs 277 pounds without gas. While loading other bikes requires a helper, one person can roll the little Ducati up the ramp and into the back of the CW van with ease. At the track, the same person can roll it back down, lever it onto its stand, and pour in the purple Daeco 108-octane while bystanders cross their arms and mutter. Bystanders, if they're in shape, are a necessity with the Supermono. With no starter and a compression ratio in the 12:1 neighborhood, it goes through bump-start pushers the way the Pony Express went through horses. (Ducati figures any racer serious enough for a Supermono will start the bike with rollers.) Down one from neutral is second gear, roll the bike backWards against compression, flip the switch on, pull in the clutch and everybody push. Several 10-foot-long black marks later, the engine fires. Keep blipping or it will die. There is no idle circuit mapped into the fuel-injection system, and the pushers, veterans now, will not be eager again. Riders accustomed to streetbikeseven small oneswill feel as if they've returned to their potty chairs upon first mounting the Mono. You crouch low, with your knees almost beneath your chin; it's a short reach to the clip-ons. A slow lap or two brings the water temperature up to 70 degrees Celsiuswhere it will remain for the rest of the dayand scuffs in the new Dunlop Radial slicks.

Below 6000 rpm, the Mono's motor is indistinguishable from the garden-variety Thumper found in, say, an XT600 Yamaha. The difference becomes apparent as revs increase. While it's all over for a stock XT at 6500 rpm, the Supermono is just beginning to breathe. The Ducati goes from less than 20 horsepower to almost 40 between 5700 and 6500 rpm, burbles through a 500-rpm plateau, and enters its real powerband at 7000 rpm. By 8000 rpmwhere torque peaks at 37 foot-poundsthe lone 100mm piston is feeding 57 horsepower into the rear contact patch. At 9750 rpm, maximum thrust of 61.4 horsepower is achieved. When the rev-limiter cuts in 1000 rpm later, there are 55 horses and the piston is traveling 4938 feet per minute. Best to shift at 10 thou. The Weber fuel-injection provides immediate, crisp response to the twistgrip, particularly within that 7 to 10 grand powerband, which is where Mr. Bordi's ingenious balancer also shows its worth. Where most other Singles would be sizzling the bike and rider with concentration-sapping, vision-blurring vibration, the Supermono feels and sounds much like one of Ducati's own V-Twins. And it feels fast: 11.44 seconds at 122 mph through the quarter-mile is right up there in the four-cylinder 600 range, and the Supermono is working against tall gearing at the dragstrip. It's only in fourth gear (out of six) through the timing lights. Flat-out top speed is an impressive 141 mph. The problem with itsy-bitsy bikes like this, sometimes, is that bumps upset them more than machines with road-hugging weight. Nothing is more disheartening than a front end just beginning to waggle when youre starting to go Really Fast. So we took it real easy with the Supermono at first. Canet did some 1:36s and 35s, came into the pits with the words to the effect that wow, its really good but just the littlest bit wobbly in the front through the fastest turns. From small wobblies do big tank-slappies grow. We preloaded the rear spring about 2mm more to get more weight on the front wheel, clicked in two more rear rebounds, salaamed toward the Vatican, and sent the boy out.

On the tight, front half of Willow, the bike sounded and looked as beforedeep-guttural, full-lean fast. After the downhill-left Turn 5, there was a difference: Where before we'd heard Canet roll off the throttle a smidge over the Turn 6 hump and into top-speed Turn 8, this time he just kept the Mono pinned all the way around to the last turn before the front straight BWAAAAAAH1:32, said the stopwatch, then 1:31, then into the 30s. On any other bike we can think of, lapping Willow that fast requires that the rider be well-grounded in the science of losing and reclaiming traction. Canet is. The Supermono, however, never broke loose at either end. It could rail precisely on the tightest line, and its Dunlops had considerable life left at the end of the day. That's what light weight will do for you. With 3.6 inches of trail, contact patches 53.6 inches apart, and the almost ideal mass centralization available with a laydown Single, the Supermono flicks from side to side like nothing we have ridden. And after that one little suspension adjustment, the bike sucked up whatever Willow could throw at it without the slightest hint of instability. It is also plusher than many modern sportbikes. The Mono's supple Öhlins suspension barely jounces the rider at all.

On a bike this light, those two 11-inch Brembo floating discs (with quick-release pads in the four-pot calipers) are almost overkill; braking power is never a concern. As for the rear, we finally have something to criticize. Rather than the rear caliper's stay arm feeding into the frame or swingarm, as is usual practice, the Supermono's feeds braking torque into a carbon-fiber bracket bolted to the bottom of the engine. The bracket's not strong enough; when the rear is applied, the bracket flexes back and forth at high frequency, which makes the pedal all juddery (as if you've just engaged ABS on a BMW), which renders the rear brake useless. For the price of this bike, that's inexcusable. So we settled for 1:30s, but a tooth or two bigger on the rear sprocket would've shaved some time if we had felt like re-gearingand we had two mystery chips for the computer that we didn't have time to fool with, either. We think 29s, even 28s, would've been attainable pretty easily, but the law of diminishing returns is very specific when it comes to $30,000 motorcycles. Thou had best not crash. Still, $30,000 is not far out of line for an open-the-crate bike that looks capable of running up front in what's become, as all good racing classes inevitably do, Very Seriousespecially in Europe and Japan. For comparison, OVER, a Japanese concern that's had great Sound of Singles success with its Yamaha SRX-engined racers, will sell you a complete bike for around $20,000. Meanwhile we're hoping Ducati forgets about our loaner Supermono. Until SoS racing catches on in the U.S., we have a very big, mean fish in a very small pond. Source Cycle World