The Hildebrand & Wolfmüller was the world's first production motorcycle.[1] Heinrich and Wilhelm Hidebrand were steam-engine engineers before Alois Wolfmüller agreed to finance them to produce their internal combustion Motorrad in Munich in 1894.[3]

The Hildebrand & Wolfmüller is credited as the world first because other possible claimants tend to be based on a bicycle chassis (e.g. de Dion-Bouton and Orient Aster,[4] and the E. R. Thomas[5]) or were never put into production. Or both, e.g. Gottlieb Daimler’s Reitwagen of 1885 was a one-off test-bed for an experimental engine in a bicycle chassis. The Felix Millet designed 'Motocyclette,' of 1893 used an aviation-style radial five-cylinder engine, but never went into mass-production.[6]

Gottlieb Daimler is sometimes known as the "Father of the Motorcycle" but supporters of H & M point out that his Einspur "boneshaker" motor bike was actually a "hybrid" motor-driven bicycle with a wooden bicycle frame, and wooden wheels.

The motorcycle featured a water-cooled engine (the coolant tank/radiator of which is prominent over and around the rear wheel) mounted in a purpose-designed tubular frame. The rear wheel was directly driven from the connecting rods (a similar arrangement to that of steam locomotives). There was no flywheel other than the rear wheel, and it needed heavy rubber bands to provide the return impulse. 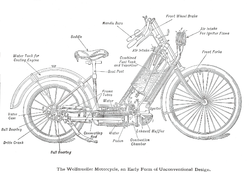 Several hundred examples of this motorcycles were built but with a high initial purchase price and fierce competition from improving designs (this model was entirely "run and jump" with neither clutch nor pedals) it is not thought to have been a great commercial success. The Hildebrand & Wolfmüller factory closed in 1919 after WWI.[8]