From CycleChaos
< Honda CB450K
Jump to navigation Jump to search 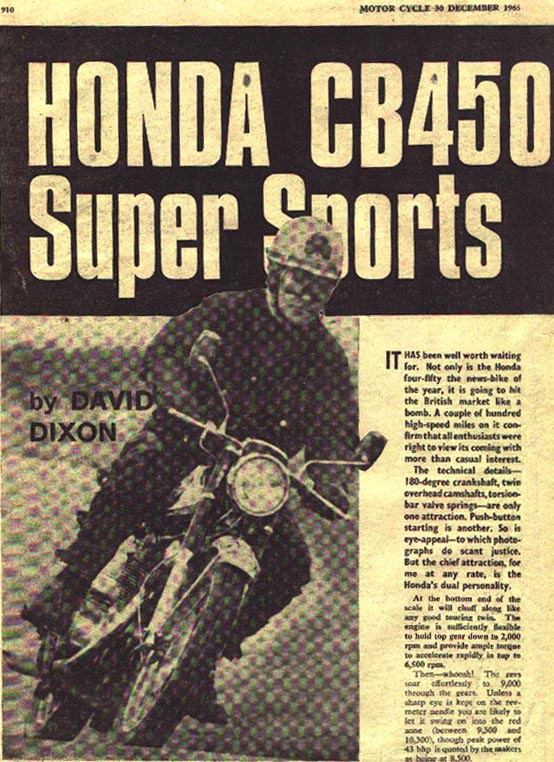 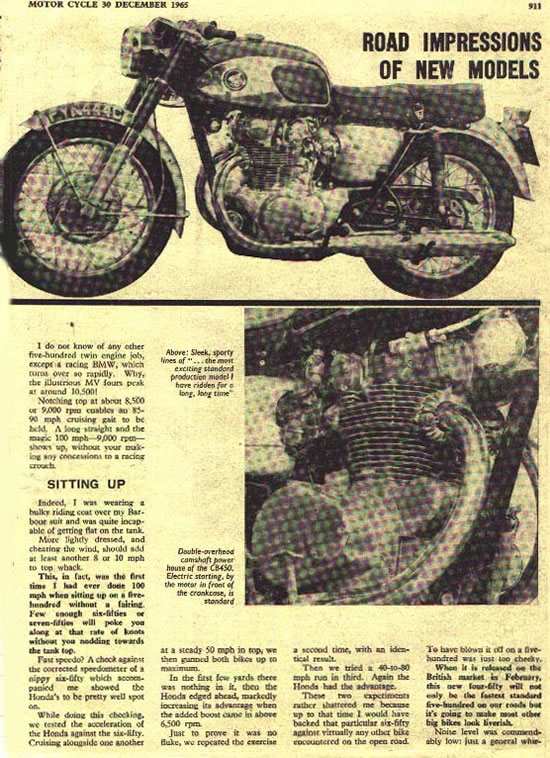 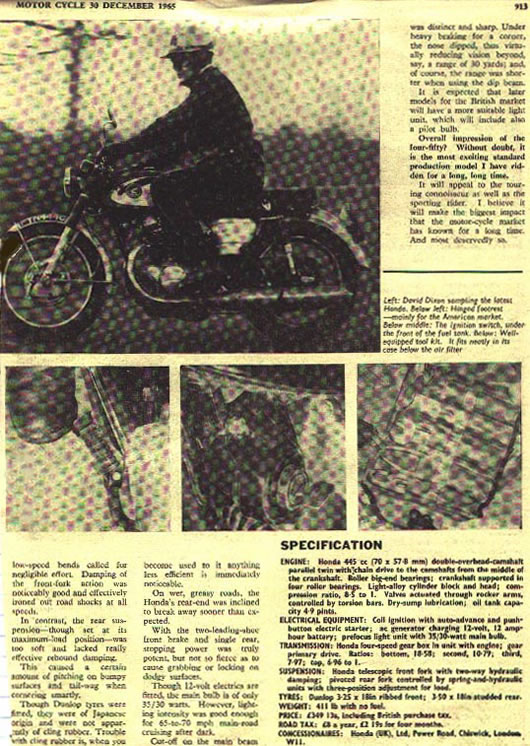 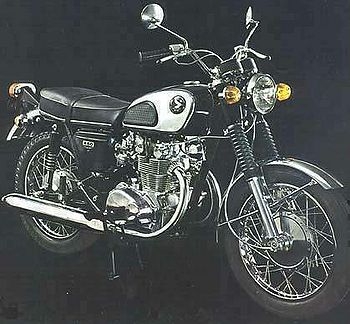 Motorcyclist Illustrated 1969 He's a decent sort, really, my next door neighbor. Mark you, he'd be an even more decent sort in my estimation if he was to teach those two kids to stay in toed after seven in the morning, particularly on those rare Sundays when I get a "lie-in". But, despite his basic British interests in all that is best in life, like cricket and rugger, he admits to curiosity nosiness, perhaps in the variety of machinery which I lock in my garage from time to time. A layman (to the point of thinking that a two-stroke is something rather naughty which takes place in Soho), he admitted to a liking for the Yamaha and Kawasaki and a Triumph.

Leading him firmly but kindly by the elbow to the shade of his blossoming cherry tree, I explained that this was, in fact, the newest product, the latest off­spring, of the giant Japanese Honda concern and that the name "Doho" was, actually, DOHC. And that this was the 450 cc twin-cylinder model which had aroused such interest at the recent motorcycle show at Brighton. "Oh," he exclaimed, rather weakly. "But it is rather handsome, don't you think?"

1 did think. And, after a good, long ride, thought even more. You remember the ill-fated, luckless 450 cc twin "Black Bomber", the motorcycle which was destined to wipe the floor with everything on two wheels, to change the face of motorcycling? Forget it. From the same family, maybe, but the resemblance is as strong as that between Liberace and Steve McQueen. The earlier model, from which we expected great things in the realms of PR, was a good motorcycle, but had its faults. It vibrated badly; it was bulky and overweight; and it didn't hold the road too well either. An unfortunate aspect of this size of unit is its "bastardisation", not accepted as belonging to any particular size-range; too big for the 350s, a shade too small for the 500s.

And yet it has everything you could wish for from a motorcycle. This, above any other which comes to mind, is the completed motorcycle. It has a twin overhead-camshaft power unit which smoothly, unhesitatingly, wafts its rider up to and over the three-figure mark; in standard trim, it comes with dual instruments of rev-counter (calibrated up to 12,000 but with the "blood-line" at 9£) and, rather optimistically, a 140 mph speedometer; steering damper; two handlebar mir­rors; trafficators as bold and decisive as those on three-ton cars; and (oh, sophistication of sophistications) an electric starter. Plus those dozen-and-one little touches which would only occur to a fastidious little Japanese, like nylon or polished alloy guides for cables, to keep them out of harms way and ensure a smooth, untramelled passage through the labyrinths of frame and cycle parts. Like the tiny grab handle above the nearside rear suspension leg, to lift the machine back on to its centre stand. Nothing, no matter how detailed, is overlooked, it seems. The rear seat in remarkably realistic synthetic leather, hinges at the nose to give access to battery and electrics. Folding footrests for rider and passen­ger. Think of it, and it's bound to have been thought of.

Internals of the power-house have been updated, putting aside the weaknesses of the "'Bomber". The lubrication system features a remodelled pump; the clutch has been redesigned; it's got a new crankshaft, carried in four bear­ings. Bore and stroke are unchanged at 70 mm x 57.8 mm, but improvements in the top half mean that rpm have been raised. Valve sizes were enlarged, compression ratio was lifted from 8.5:1 to 9.0:1; combustion chamber and piston were reshaped and the resultant betterment gives more power, more smoothly, more reliably. Gear ratios are designed for every contingency: fast touring (6000 rpm at 70 mph), pobbling through traffic, and clean, sharp acceleration. Breathing is through two 32 mm Keihin carburetors.

Road holding has been helped by the new frame, a little longer than the earlier machines, and a combination of large diameter single tubes and smaller twin members. From the steering head, a heavy down-tube travels to a point just beneath the engine plates where it separates into two, running below the crankcase. Along the top of the engine there is a sizeable tube as far back as the nose of the seat, at which point it blossoms into twofold. A sturdy, substantial skeleton which holds together the flesh and bones of the CB450.

Suspension is something which creates a problem for me the makers' settlings are often a little harsh, having usually been set for an average 11-stoner, the resultant stiffness, even with adjustable units, making life uncomfortable. A good compromise seems to have been established on the 450-rear damping, although I rode it only over A and B class roads and obviously not "on the rough" was such that it went unnoticed; was taken very much for granted and war­rants comment only in that it was good, very good. (My wife remarked that she had no complaints, which really sets the seal on it!). Front fork tube diameter has been increased- so has the travel, by a half-inch. Soft without being spongy but there was a little patter from the front wheel under braking from high speeds.

Electrics and the improvement thereof are a strongpoint with the Japanese. They have always specialised in the miniature, in transistorisation. The electrical components on the CB450 are above reproach and I remember, as you prob­ably do, the occasion a few years ago when Luigi Taveri pulled into his pit in the Isle of Man where, within what seemed like only a minute, his mechanics had ripped off a great slab of transistorised control apparatus and replaced it. Taveri sped off down Bray Hill on his little Honda, the subject of a mechanical heart transplant. Part of the new Honda's system is an alternator output control where, to eliminate battery-boiling, excess current is carried straight to earth. Fear not that the lights (which are, as one might expect, fully up to the mark), trafficators, ignition .and horn will drain the battery of its energy. The situation is, as the pundits have it, completely in hand.

Honda has always made "small" machines, with the distinguished exception of the startling CB750 "four". Engine sizes have varied from 50 cc to 450 cc, but they are usually more comfortable for those of smaller-than-average stature. Riding position is narrow and neat, and even the most un­gainly, misshapen figure would find itself organised into a tidy, knees-and-elbows-in, straight-armed style. Lean into the wind if you must, but it would look most improper on a mount of such middle-class propriety. The re-shaped petrol tank, slimmer, taller, and the almost unkinked handlebars (from where every mechanical operation stems, rear brake and gear change apart, and from where, on a dark and serpentine road, one could control progress—starting/stopping, directional changes, headlight beam, horn-blasting and all— without moving much more than the thumbs of either hand), must answer for the respectability of the riding style.

Braking disappointed. Perhaps the linings had yet to bed down in which case I preferred them somnambulant rather than wide awake but reluctant to get to work. Maybe I expected too much; the apparent faultlessness of the machine as a whole led me to anticipate tremendous braking power, particularly at the front. It was preferable to use the engine as a brake, changing down through the five-speed gearbox with that distinctive and beautifully-engineered. The thought crept into a cynical corner of my mind that, with Japanese tires (that old hobby-horse of mine) lacking in wet-weather traction as they do, it was as well that retarding progress was a gentle business. Incidentally, when our photographer Brian Holder and I met, one typical English early summer day in pouring rain, I tried a "wheelie". As the wheel stepped from side to side, rpm soared and I felt a distinct loss of rapport between man and machine, it was then that I realised that whoever had penned the immortal cliche, "Discretion is the better part of valour", was a kindred spirit and a man after my own palpitating heart.

One of many pleasures in this era of refined, discerning and "leisure" (pronounced "leesure" in deference to the nation from which that vast industry stems) motorcycling is that of firing a machine at the push of a button. All right, so it's unshaven, foul-breathed, red-blooded masculinity to swing your motor into life with a steel-muscled, hairy right leg. But at the time of writing I bear a fresh scar on my calf as evidence of weaknesses in this system. (The worst pain to 'bear is that of smiling through tightly clenched teeth at amused onlookers as agony fastens its grip, before giving a nonchalant wave to dismiss the incident, and dashing around the first corner to wring the 'blood out of a soaking sock, roll around in the road clutching the leg and curs­ing one's Maker, the machine's maker, and anyone within sight, sound or living memory, especially one's wife for not sympathising and even more so when she does.) Not so with the Honda CB450. Turn on petrol; flick back choke lever; switch on ignition; depress right thumb on handlebar 'button and there you have it. A rustling from the starter motor, smaller than the earlier component and the rather high-pitched note of the twin is there to confound your friends and bring a knowing smile to the lips of the old-timers as they stroll away, stiff right legs in perfect step, to talk of the Good Old Days when you could tell which were men and which were girls because the latter danced backwards.

A ride through the Cotswold’s and the Vale of Evesham on a fresh, clean morning of spring sunshine when the world is in blossom, young and un­spoiled; when the English countryside is greener than you could imagine, and week-old lambs, tails destined to twirl for only a limited time before going their separate ways, leap to the woolly protection of their mothers as a strange machine passes at speed; this is all that's needed to confirm that with a mount of the calibre of this creation from the other side of the globe to transport you, all's well with the world.