Power was moderated via the Wet, multiplate with coil springs.

It came with a 120/70-ZR17 front tire and a 180/55-ZR17 rear tire. Stopping was achieved via 2x 320mm hydraulic discs with dual piston calipers in the front and a Single 240mm disc with single piston caliper in the rear. The front suspension was a 41mm telescopic fork while the rear was equipped with a Monoshock with adjustable preload. The CB650F was fitted with a 17.3 Liters / 4.5 US gal fuel tank. The wheelbase was 1450 mm / 57.1 in long. 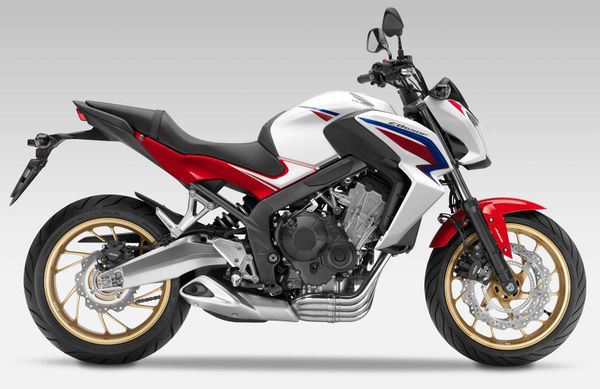 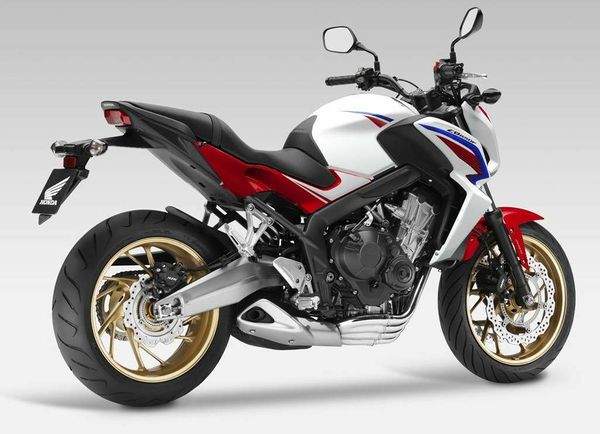 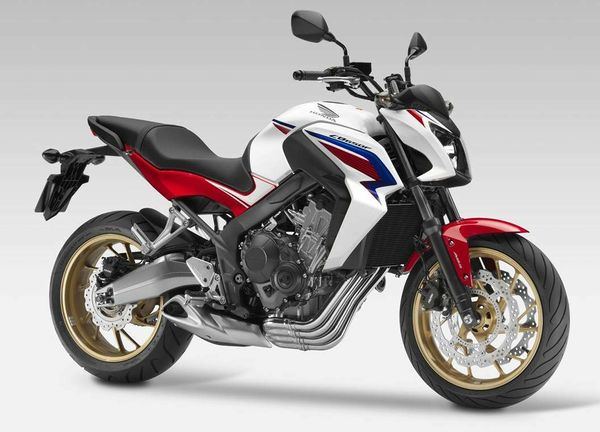 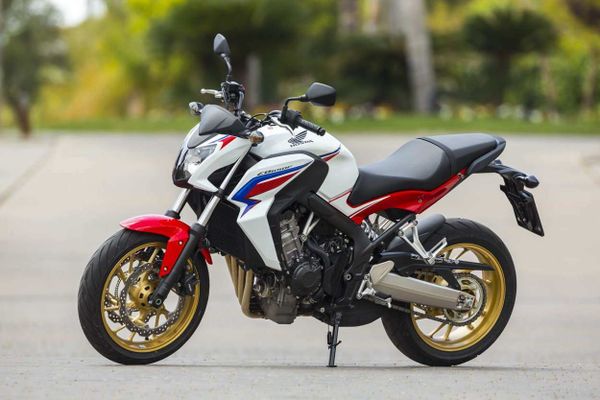 This Honda CB650Fnaked streetfighter is powered by a 649cc inline-four, the Japanese companys third new engine in three years. Key design features of the powerplant include cylinders canted forward 30 degrees, a 16-valve DOHC cylinder head with direct cam actuation, PGM-FI fuel injection (working with 32mm throttle bodies), and connecting rods optimized in length to minimize side forces on the pistons, which have asymmetric skirts to further reduce friction. Whats more, breathing holes in the crankcase walls between the journals reduce pumping losses as rpm rises. Honda says the oversquare engine, with a 67.0mm bore and a 46.0mm stroke, is tuned for good torque below 4,000 rpm and great midrange roll-on throttle response. Yet the CB650F engine can also rev, with a claimed 86 hp arriving at 11,000 rpm and a peak torque value of 46 foot-pounds reached at 8,000. And thanks to internal water channeling from head to cylinders, the number of hoses has been reduced, giving this Honda engine a clean, uncluttered appearance that can be appreciated from its highly visible spot beneath the bikes minimal fairing, where the aforementioned headers are also display. Honda, interestingly, placed the oil cooler on the left front and the oil filter on the back of the engine to help accommodate those cool 4-into-2-into-1 pipes, which sweep back to the right and flow into a stubby underslung muffler that helps with mass centralization. The CB650F chassisa twin-spar arrangement designed to be extra stiff around the headstock and a bit flexible down by the sparshas cast pivot plates, a 41mm Showa fork and a conventional aluminum swingarm acting directly on a single shock. Moreover, Honda says the bikewhich has twin 320mm front brake discs and a 240mm rear with standard ABShas a slim feel, and the high-set handlebars are designed to give riders, especially beginners, excellent confidence and control on the bike, which has a claimed curb weight of 454 lb., a rake of 25.5 degrees and 3.98 inches of trail.