From CycleChaos
< Honda CBR1000RR
Jump to navigation Jump to search

It came with a 120/70ZR-17 front tire and a 190/50ZR-17 rear tire. Stopping was achieved via 2x 320mm discs 4 piston calipers, Combined ABS and sintered metal pads in the front and a Single 220mm disc, Combined ABS and sintered metal pads in the rear. The front suspension was a 43mm inverted HMAS cartridge-type telescopic fork with stepless preload, compression and rebound adjustment, while the rear was equipped with a Unit Pro-Link with gas-charged HMAS damper featuring 10-step preload and stepless compression and rebound damping adjustment,. The CBR1000RR / C-ABS was fitted with a 17.7 Liters / 4.7 gal fuel tank. The bike weighed just 173 kg / 381.3 lbs. The wheelbase was 1407 mm / 55.4 in long. 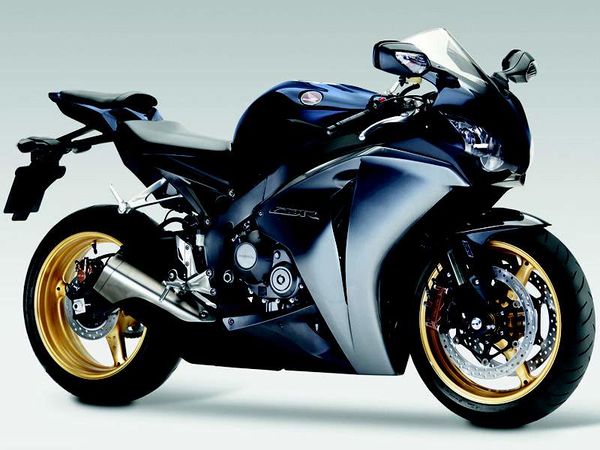 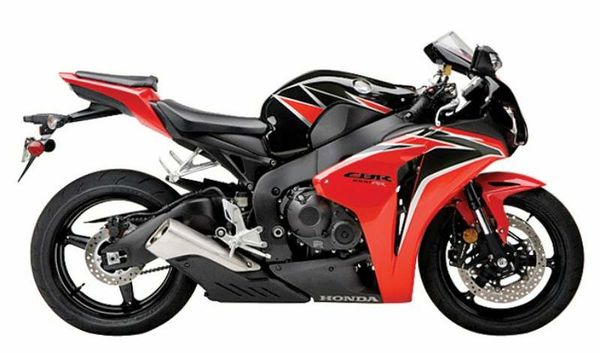 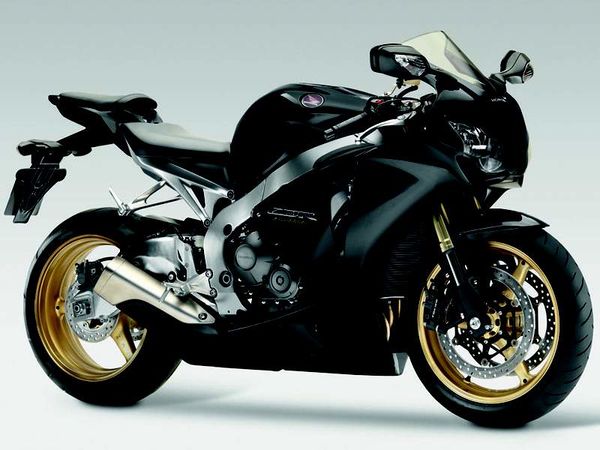 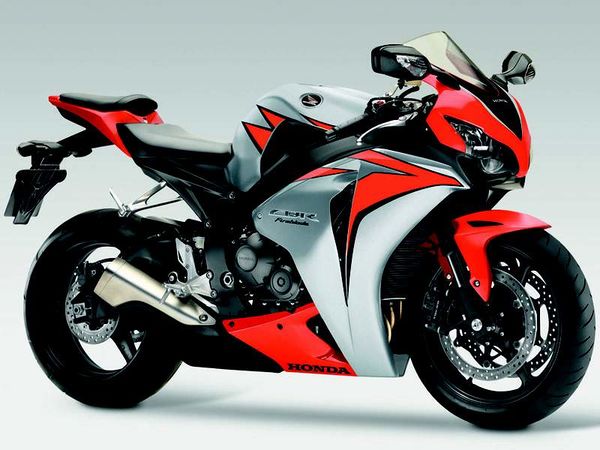 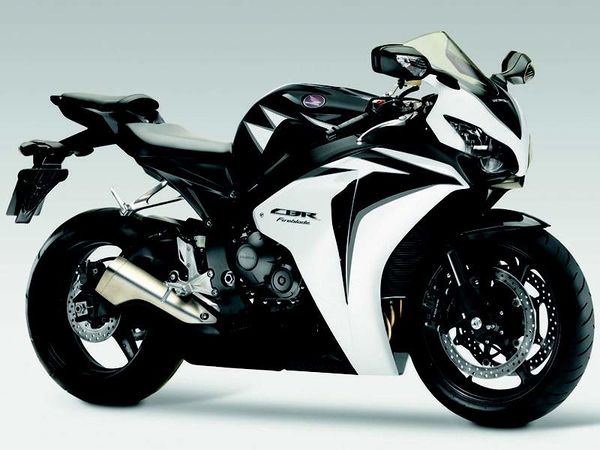 Introduction Celebrated worldwide for its scorching speed and effortless agility, the CBR1000RR Fireblade is an established icon of performance motorcycling. As we proudly celebrated our 50th year of racing at the 2009

Isle of Man TT, the CBR1000RR appetite for victory was insatiable; grabbing the top 5 places in the Superbike race, carrying John McGuinness to his 15th TT win and setting new lap and race records. Yet the ultimate sportsbike is not all about speed. 'Total Control' has been at the heart of its development since the Fireblade was first launched in 1992, and it has sped from success to success. Honda has continuously improved the ride experience that gives the rider unique confidence on both road and track. The 1992 CBR900RR captivated the imagination of the motorcycling world at its launch. Its minimalist design eliminated any weight that didn't need to be there. Successive generations have been improved by further reducing weight and focusing what's left around its centre of gravity (mass centralisation). This gives the bike both its characteristic agility and excellent stability. Confidently carving out long corners or whipping through quick bends, its razor-sharp response and predictable behaviour have always been as appreciated on the road as they are on the track. A new ultra-light engine and radically revised chassis in 2008 took the concept of 'Total Control' to unprecedented levels and ensured continuing success for the Fireblade. Inspired by ancient Japanese craftsmanship and culture, combined with developments in advanced aerodynamic performance, the new machine was a masterpiece of engineering. The engine responded smoothly to every rider input at the throttle with controllable power and precise acceleration. A new, super-slim cast aluminum frame achieved the finest balance between the strength necessary to harness the engine's power, and the flexibility needed to obtain maximum traction in the corners. Even more compact dimensions contributed to mass centralisation and gave the rider more freedom to move around the machine and achieve the best weight distribution for the conditions. In 2009, Honda epitomisedthe 'Total Control' philosophy by offering Fireblade riders the option of a high performing electronically-controlled "Combined ABS", a revolutionary innovation for a bike in this class. The first Combined ABS to be designed specifically for a super sports motorcycle, it retains the necessary feel at the controls as well as incorporating the light weight and keenly developed performance demanded by its highly competitive environment. For 2010, the CBR1000RR Fireblade continues to celebrate its success with carefully selected styling and performance improvements that enhance its sports image.

New for 2010  Sharper rear styling with revised shape and new tail-light with clear lens  Sharp exhaust muffler appearance with aluminum muffler cover  New graphics and colors  Improved crankshaft inertia mass Development Concept The CBR1000RR Fireblade holds an unchallenged leadership position as the sportsbike that offers the best balance of sports performance and rideability on both track and road. For 2010, our designers and engineers have focused on sharpening its track-ready image. The resulting developments, while not major changes, heighten enjoyment of the machine's high quality and clean sports profile. They also add to the ownership experience by increasing the pride in riding this extremely desirable machine, whether tearing it up on trackdays or perfecting your skills on the curves and twists of your favourite roads. Styling The 2010 Fireblade styling adds further highlights to the motorcycle's pared-down and purposeful design. The overall form dispenses with anything that doesn't support the twin goals of minimal weight and optimal mass centralisation. The rear fender has been sharpened and a clear-lens tail-light added. For 2010 the indicators and licence plate holder have been integrated into a compact and convenient assembly which can now be easily detached from the rear fender unit for closed track riding. The low-slung exhaust features a new, redesigned muffler with a top-quality aluminum finish. Designed for excellent handling, the front cowl is short and compact, incorporating acutely styled dual ram-air intakes and striking line-beam headlights. Its styling emphasises the bike's dynamic performance while maximising its aerodynamic efficiency. For 2010 its aggressive, race-ready appearance has been updated with new graphics and stripes on the middle front cowl on all versions but Graphite Black (Black special). Coloring Concept The 2010 CBR1000RR Fireblade comes in four exciting new color variants. Graphite Black with White/ Black stripes emphasises the sportsbike's lean, competitive lines. The Silver Metallic/Pearl Fire Orange version is bold and vibrant. A refreshed HRC tricolor version celebrates 50 years of Honda racing, evoking all the pride of the CBR heritage and enhancing its racing image. It features additional stripes on the rear fender and larger ones on the upper side fairing, and HRC stickers on the middle and upper front cowl, rear fender and front fender. There is also a special Graphite Black version. Simple and elegant, it places a firm emphasis on the clean lines of the bodywork which contrast strongly with the silver coloured frame. All colors are available in both the Standard and the Combined ABS versions.

Colours  Graphite Black (White/Black stripes)  Digital Silver Metallic/ Pearl Fire Orange  Pearl Sunbeam White (Tricolor - HRC)  Graphite Black (Black special) Engine CBR1000RR engine performance is distinguished by exceptional torque throughout its range. Acceleration is smooth and powerful, seamlessly delivered from the lightest, most compact package. The wide-bore, short-stroke configuration that delivers its high-revving power range is made possible by sleeveless cylinders and lightweight pistons, cams, valves and cranks. In order to maximize enjoyment of sports riding, innovations have been made to absorb fluctuations in engine torque and improve throttle control. The ACG flywheels have been made bigger and crankshaft rigidity has been enhanced to fit the flywheel size, increasing crankshaft inertia mass by 6.87%. This enables generation of optimal crankshaft inertia mass during racing, improving throttle control and racing potential. This has been achieved without any increase in weight through the use of lightweight components including an aluminum cylinder head sealing bolt, thin-walled flange section for the exhaust pipe and a smaller fan motor. The engine's silky-smooth delivery is aided by an Assist Slipper Clutch which ensures confident downshifting and deceleration as well as quick clutch re-engagement, light lever load and comfortable clutch action. The CBR1000RR exhaust combines a compact configuration with maximum ground clearance and mass centralisation. Two valves in the muffler constantly tailor the system for maximum drive and smooth delivery and boost the machine's power at full throttle. Our oxygen-sensing HECS3 (Honda Evolutional Catalysing System) constantly monitors emissions, reducing any harmful gases and tailoring fuelling for the most efficient combustion mixture.

Chassis In designing the sophisticated four-piece aluminum frame for the CBR1000RR Fireblade, Honda engineers aimed to perfect the delicate balance of strength, rigidity and lightness required for top superbike performance. Allowing agile, confident handling, it also facilitates the positioning of all other components for mass centralisation. The gull-wing shaped swingarm is long, giving maximum traction. It is complemented by our innovative Unit Pro-Link rear suspension, developed in the laboratory of MotoGP racing. At the front,a fully adjustable 43mm HMAS cartridge-type front fork contributes to confident control. Together these systems provide assured road holding on both road and track. The Fireblade also features our second-generation HESD Steering Damper which automatically tailors damping force according to bike speed. This enhances high-speed stability by minimising sudden steering changes, and also enables light, easy steering at low speeds. Brakes At the front, powerful radially-mounted four-piston calipers feature a one-piece monoblock construction for light weight and optimal rigidity. Six-point floating rotors feature variable rotor hole sizes, further reducing weight while maintaining braking feel. Electronically-Controlled "Combined ABS" Since 2009 it has been possible to enjoy breathtaking CBR performance with the extra reassurance of a specially developed electronically-controlled "Combined ABS", developed by Honda specifically for use on our Super Sports bikes. This revolutionary system allows riders to brake naturally and confidently without disturbing the smooth, intuitive control that is so essential to sports riding. A typically short wheelbase means that a sportsbike can be prone to pitching forward under extreme braking. Our electronically-controlled "Combined ABS" minimises the pitch tendency, enhancing balance and stability while providing the ABS and CBS advantages of smooth, easy braking and wheel lock prevention. Exhaustive testing on road and track has shown that our electronically-controlled "Combined ABS" enhances control while retaining cornering feel. For riders of all skill levels, it offers a confidence and skill-building option that significantly improves enjoyment of the Super Sport riding experience. Optional Equipment A broad range of accessories will be supplied by Honda Access Europe to further extend the versatility of the CBR1000RR. These accessories include:

 A selection of lightweight and stylish carbon fibre parts which have been designed specifically for the CBR1000RR. These include a rear wheel hugger (non-ABS version only) that protects chassis internals, a front mudguard that also protects the lower front fork tubes, and decorative crankcase covers that attach to ACG and clutch covers.  An elegant color-matched rear wheel hugger that protects the rear shock absorber from dirt (non-ABS version only).  A carbon-fibre-look protective tank pad and fuel lid cover set bearing the HRC logo.  A color-matched rear seat cowl that snaps into place to accentuate the CBR1000RR's keen, competitive look.  An attractive set of wheel stickers with the Honda Racing logo.  A 27.4mm taller, WVTA approved windscreen. Available in a black-tinted or clear version with the Honda Racing logo, it offers extra wind protection without compromising manoeuvrability and shades the instrument panel from the sun.  A set of black nylon fairing protectors which reduce the risk of damage to fairing parts.  A patented, Honda-unique replacement rider's seat based on elastomer mesh technology for unrivalled comfort. It features a CBR logo, e-cushion tag and alternative skin pattern.  A seat bag that can be mounted on the pillion seat to provide extra luggage space.  A tank bag that keeps smaller essentials to hand without compromising ride comfort. (This can be combined with the seat bag to provide enough carrying capacity for weekend touring.)  A compact AVERTO alarm kit with motion detector, siren and back-up battery to provide extra protection against vandalism and theft. A low-consumption sleep mode protects battery from drainage.  A U-lock that's designed to fit into the compact space located under the pillion seat pad or optional rear seat cowl.  A tilting tubular steel paddock stand that lifts the motorcycle by the end of its swingarm to facilitate cleaning and rear wheel maintenance.  ECU for "Combined ABS" for circuit usage.