It came with a 120/70 ZR17 front tire and a 180/55 ZR17 rear tire. Stopping was achieved via 2x 310mm discs 4 piston calipers in the front and a Single 220mm disc 1 piston caliper in the rear. The front suspension was a 41mm inverted Big Piston Fork with spring preload, rebound and compression damping adjustability while the rear was equipped with a Unit Pro-Link HMAS single shock with spring preload, rebound and compression damping adjustability;. The CBR600RR Ian Hutchinson TT Replica was fitted with a 18.2 liters / 4.8 gal fuel tank. The bike weighed just 156.5 kg / 345 lbs. The wheelbase was 1369 mm / 53.9 in long. 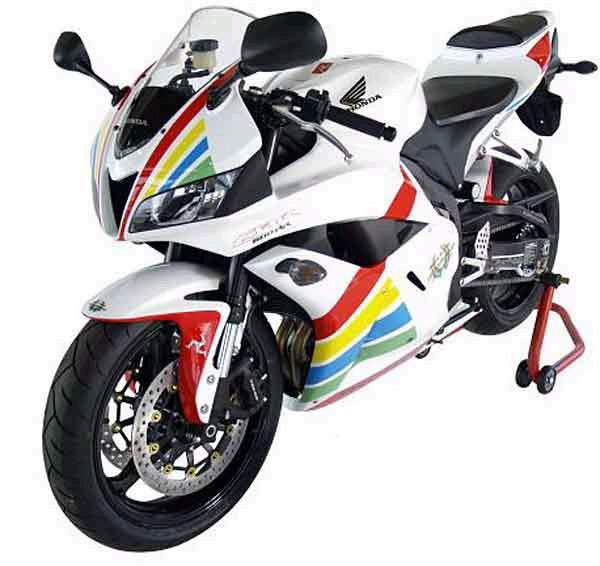 In 1959 a young Japanese bikemaker called Soichiro Honda took on the on the might of the British and Italian motorcycle industries on that most dangerous of street circuits, the 60km Isle of Man TT course.

It was the start of growing involvement with the Manx races, reflecting Soichiro Honda's belief that the TT represented the pinnacle of motorcycle racing achievement.

In 2009 the company celebrated 50 years of World championship racing at the TT, throwing its weight behind John McGuinness in his attempt to take second place in the list of all-time TT winners behind the late Joey Dunlop and Ian Hutchinson's efforts in the Supersport TT on a CBR600RR

To commemorate Honda's half-century at the TT, Honda South Africa has released a limited-edition CBR600RR in livery of 2009 Supersport TT winner Hutchinson.

The 50th Anniversary CBR600RRs are numbered from 1 to 50 (yes, that's all there are) and a Shark RSF3 helmet sprayed to match will be included with each bike, as will a personalised certificate of authenticity.