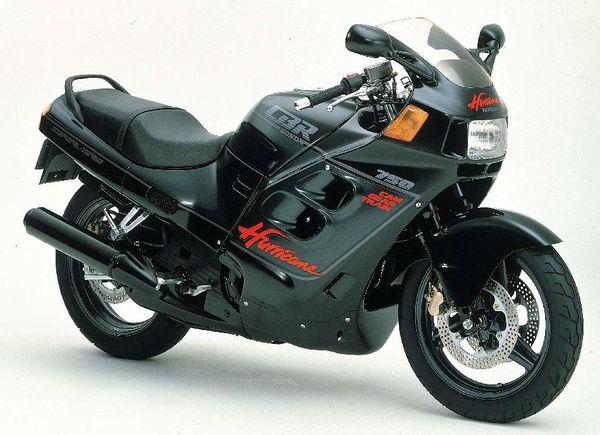 Released in 1987, the CBR75O Hurricane closely resembles the 1000cc model that came out in the same year, the major differences being the 750 model had the forks, brakes and callipers from the VFR75O. In 1988, the bike was remodelled to produce a visual clone of its' one-litre bigger brother - perhaps this is what sounded the death-knell for the bike ('more cubes is best')?

Which is a shame, as this is a very easy bike to ride. No surprises, smooth for touring or city commuting. I used it every day and it was just totally reliable and predictable and went where you pointed her. Could be a tad soft in the rear two up, but otherwise a comfy ride.

Pegs and controls are 'all in the right places and fall easily to hand' (to paraphrase a well-known magazine of years gone by) and the riding position was relaxed, meaning long stints on the road weren't a problem.

The CBR has a 21 litre tank with 3 liters in reserve. You could get up to 300kms riding conservatively before having to switch or refuel. Loaded up with heavy gear or pillion or pushing the bike hard would see that drop to around 250 - 270 depending how hard I worked the bike.

The gauges are easy to read and a fuel gauge on a bike of this age is a bonus.

The CBR750 is not an outright speedball , but fast enough on the pickup to pass cars in the blink of an eye and keep them back where they belong, even loaded up with gear.

The gearbox is reasonably smooth apart from the usual clunk into First gear, first thing on a cold morning. That said, it pays to be deliberate going up into Second as it is all too easy to find neutral instead. Brakes are great and require little effort to haul the 200kg (dry) weight up.