The engine was a liquid cooled single cylinder, four-stroke. A 96.0mm bore x 62.1mm stroke result in a displacement of just 449.7 cubic centimeters. Fuel was supplied via a single overhead cams (sohc).

The bike has a 5-speed transmission. Power was moderated via the multi plate wet clutch.

It came with a 80/100-21 front tire and a 120/80-19 rear tire. Stopping was achieved via single disc. hydraulic. two-piston calipers. in the front and a single disc. hydraulic. single-piston caliper. in the rear. The front suspension was a 49mm inverted showa fork with rebound and compression damping adjustability. while the rear was equipped with a pro-link® showa single shock with adjustable spring preload, rebound and compression damping adjustability.. The CRF450R was fitted with a 1.7 Gallon (6.43 Liters) fuel tank. The bike weighed just 240.3 pounds (109.0 Kg). The wheelbase was 58.31 inches (1481 mm) long. 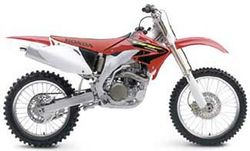 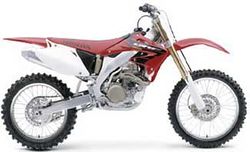 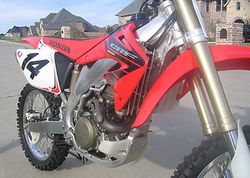 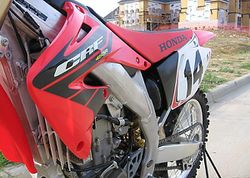 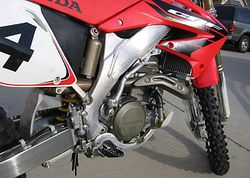 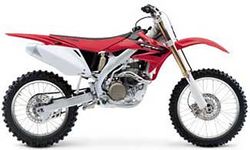 The 2003 CRF450R is as close as common riders can get to a full-fledged factory MX ride. Derived from the top racing bikes Honda puts on the World MX tracks, the CRF450R retains the lightweight aluminum frame, the explosive power deployment of the 4-stroke single and the advanced-tech Showa suspensions.

The rest is up to the rider, as the technical prerequisites for a victory on the dirt track are already met. Or if you prefer to explore the wilderness with your buddies, the 2003 CRF450R can be your brawny, reliable partner for off-road adrenaline.

The Honda CRF450R is one of the elite motocross machines, and one of the very popular choices among dirt riders. A championship winner on multiple occasions, this machine receives a host of updates in 2005. The engine cases have been revised and the engine is now tilted forward for a lower position enhancing maneuverability. The radiators also went lower, and the water pump components now provide a longer life.

The front hub is lighter and stronger, with the forks also lightened, plus revalved suspensions, carburetor revisions and relocated exhaust for better mass centralization. 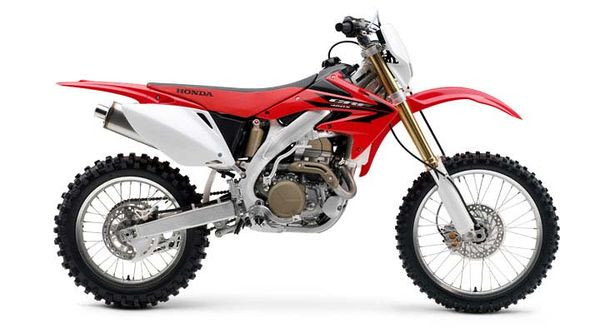 The 2005 CRF450X is derived straight form the MX Championship winning R version and tuned for excellent off-road performance. Built as a dependable trail machine and loaded with Honda's best technologies, the 2005 CRF450X is ready to tackle the toughest terrain.

Electric starting, enduro-spec suspensions, wider, more compliant gear ratios, a bullet-proof Unicam engine and all the above backed with Honda's traditional, acclaimed reliability make this bike one of the the premier choices for tough trail riders. 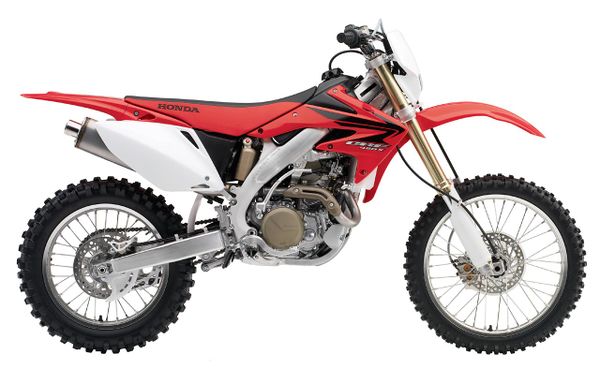 The 2006 CRF450X carries on the amazing Honda off-road heritage, offering both racers and weekend warriors the means to push the limits even further. This model year comes with several upgrades, with the most important ones being the new one-piece cover protecting the throttle cable, and keeping dirt and water out, prolonging the life of the part and ensuring smooth, safe operation.

At the same time, the 2006 iteration brings a new throttle pump and linkage for improved response. Various components have been revised, too to make the bike lighter and therefore, more nimble.

The 2006 Honda CRF450R brings in quite a spectacular set of improvements to the Unicam engine, now fueled by a lager carburetor and sporting a smaller exhaust valve, lighter decompression system, a new ignition map, stronger clutch basket and lighter covers, and anew throttle pump and linkage.

15% improved braking power for the front caliper, better tires, a revised exhaust and revalved front suspensions are also on the menu for this year's iteration of the highly successful and equally revered machine. 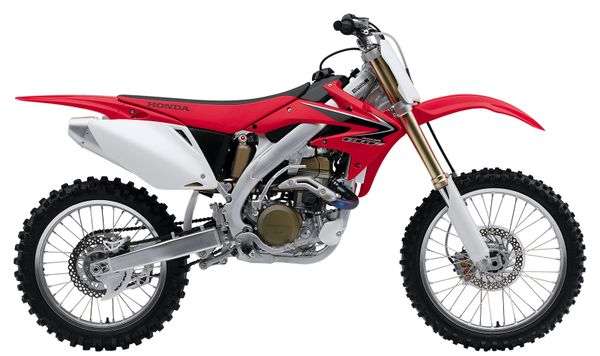 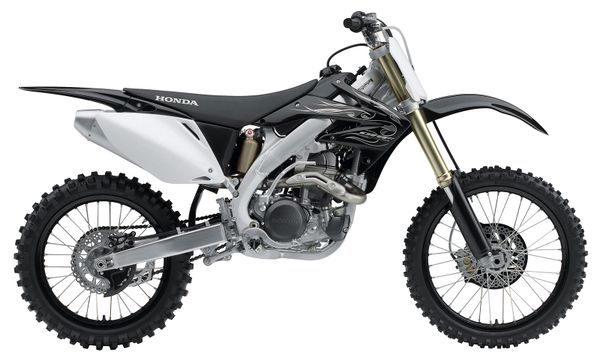 The 2007 CRF450R received a ton of modifications and upgrades, taking the top-class MX performance to an even higher standard. For 2007, the engine got a multi-map CDI, an increased upper rev limit, a lighter counterbalancer and drive gears and a better clutch.

A lightweight Honda Progressive Steering Damper (HPSD) was added for more precise steering, while the rear shock valving was matched to the front dampers. Using advanced design and light materials, the 2007 CRF450R remained a slim and nimble machine, a dependable ride for the victory-focused riders who want to push their limits even further.

The name CRF450X causes unrest in the hearts of the other competitors,a s it is similar with motocross excellence and is usually associated with an almost certain victory on the dirt track or off-road course. With Baja 500 and Baja 1000 seeing the CRF450X winning for so many times, it's obvious you're looking at a merciless bike created for the pros. 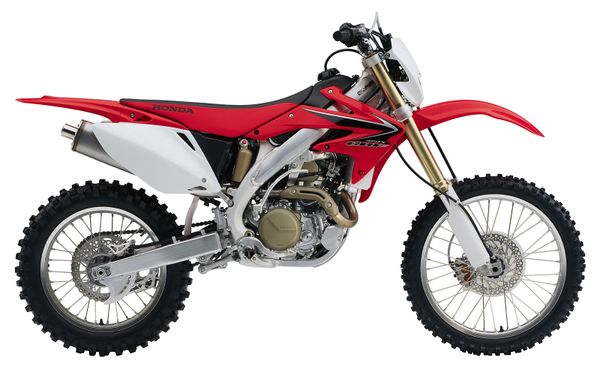 The CRF450X needs no introduction to the passionate motorcycle rider. However, the rest of you should know that you're looking at the King of Baja: this machine conquered the extreme conditions of the Baja 500 and Baja 1000 rallies on multiple occasions and has proven its might. If you're aboard the 2008 CRF450X and are stuck, then you're doing something wrong.

The 2008 Honda CRF450X brings in precise acceleration thanks to the throttle position sensor, while the reduced weight of the engine and aluminum frame improve both handling and power deployment. If you're not willing to settle for anything short of the best and are looking for an off-road bike you can grow to love, go the CRF450X way. 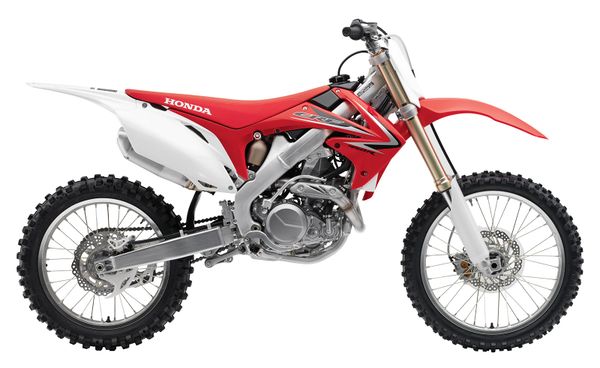 The 2008 Honda CRF450R receives an all-new, lighter engine with improved power response thanks to the PGM fuel injection, a nifty match for the new aluminum frame with Kayaba suspensions, a longer swingarm and a bigger airbox, with a redesigned exhaust and a new bodywork styling.

Still one of the leading off-road bikes in the top range, the 2008 CRF450R is now even more aggressive and will help daring riders achieve more wins. 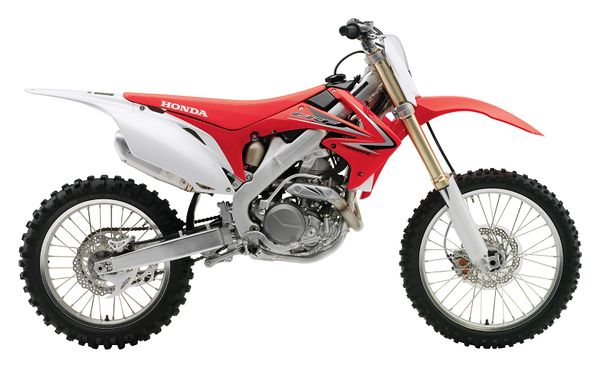 Regarded as one of the benchmarks when it comes to MX bikes the Honda CRF450R spells engineering excellence and high performance with the only goal being crossing the finish line in the first position.The 2009 model brings upgraded ECU mappings, Air-Oil-Separated Kayaba forks,a redesigned engine auto-decompressor, and many more engine upgrades for increased economy and performance.

The 2009 CRF450R obviously shares the amazing Honda Progressive Steering Damper (HPSD) for precise tracking through corners and a heap of other features which make it a winner's bike.

Often the first bike to be seen crossing the finish line in motocross competitions, the Honda CRF450R receives updates for 2010. One of the main additions is the new Honda Progressive Steering Damper, offering an even more precise directional control regardless of speed. The engine also received a new throttle body and a new ECU mapping for an even faster response, a feature both intermediate and expert riders will love.

The rear of the bike was also updated, from the subframe to a new shock link, with a new mount for a more balanced feeling aboard the bike. Honda also loaded a 94dB exhaust to comply with the requirements of some racing organizations. 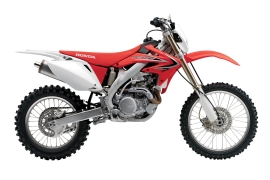 How about a machine created from the best technology Honda has in store for the toughest riding environments? If rough is your middle name, then the 2011 CRF450X is most likely your weapon of choice. Derived from the racing-specced R machinery and upgraded to comply with the rigors riding the Baja comes with, the CRF450X is engineered to provide relentless torque and keep on going forward where others fail.

An MX-racing Progressive Steering Damper is standard for precise control and less rider fatigue, while the high-compression carbureted Unicam 449 engine offers a ruthless display of off-road might which will surprise even the seasoned racers. If top off-road/ cross-country brawn is what you need, then you need the 2011 Honda CRF450X. 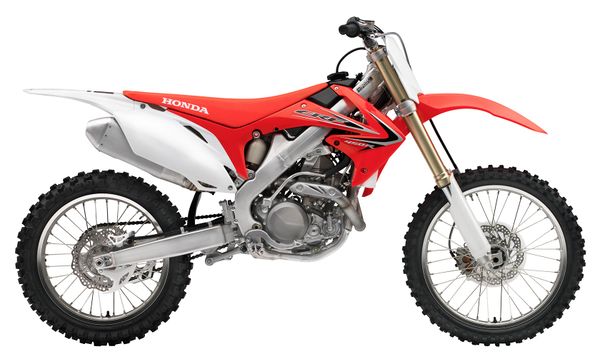 2011 brings upgrades and revisions to the performance specs of the Honda CRF450R: new forks now provide a stiffer response for more aggressive riding, and comply better with the upgraded rear suspension linkage in the rear. Foot pegs are now wider and longer for enhanced rider support and increased confidence across rough terrain. At the same rime, a new chain roller came in place for added durability.

If top-performance from a leading off-road machine is your greatest demand, then the 2011 Honda CRF450R may indeed be one of the best choices. Powerful yet manageable, this machinery is the epitome of MX technology, a true champion's bike, ready for the next win.

For years, the Honda CRF450R has represented the MX elite, and the 2012 iteration does not stray from the tradition. 2012 brings a new aluminum frame with a new suspension package and a shorter dual muffler positioned closer to the center of the bike, for a better-centralized mas and a more nimble feel.

The 2012 CRF450R also comes with the new KYB Pneumatic Spring Fork which brings better performance and a lighter build. A new, stronger clutch is also on the menu, together with revised airbox, bodywork livery and styling, new rotors and upgraded engine parts, such as piston, radiators, mapping and many more. 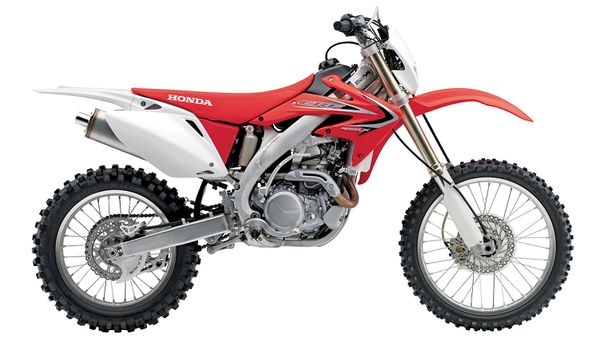 Sharing the same off-road magic with the CRF450R, the 2012 CRF450X is one of the elite trail bikes. This machine sports several top-drawer technologies whose performance has been proven in the R beast: the Pro-Link rear suspension, the Honda Progressive Steering Damper, a reliable electric starting system and the bulletproof Unicam engine, all backed with Baja 1000 and Baja 500 victories for a truly spectacular package.

Serious racing or weekend fun, the 2012 CRF450X is here to deliver, for both diehard competitions and relaxed off-road exploration.

Honda has unveiled its CRF450 Rally model at the 2012 International Motorcycle, Scooter and Bike Fair in Cologne, Germany. The new machine will compete in the motorcycle class in the 2013 Dakar Rally. The CRF450 Rally, based on Honda's commercial CRF450X enduro racing model, is fitted with Honda's Programmed Fuel Injection (PGM-FI) electronic fuel injection system to ensure fuel efficiency and durability. Honda will be aiming for its first rally victory with a model based on a production machine.

The 2013 CRF450R retains the top-notch aluminum frame and swingarm of the previous model year, while the KYB PSF (Pneumatic Spring Fork) suspension maintains the reduced weight and top-level performance of the suspensions. 2014 brings a new engine intake and exhaust ports, dual-timing fuel injection and revised exhausts, and new clutch springs.

For the amateur racer or hobby rider alike, the 2014 CRF450R represents a truly great platform which provides premium quality derived from the factory rides at a fraction of the works prices.

The 2017 Honda CRF450RX has incredible throttle response that had couple testers feeling like it was almost better than the “R” model (on the CRF450RX’s standard map). An aggressive torquey low end kept the rear wheel from spinning too much in the drier sections of the trails, but gave you that exciting feeling all way around the tight and flowy course.

The 2017 CRF450R has been developed – with direct input from Honda’s AMA and MX GP teams – to be first out of the gate, first into turn 1 and to punch a blistering lap time. With a new engine packing an 11% increase in peak power matched to a chassis that can truly make full use of it, the 2017 CRF450R is stronger, sharper and more focused.

The 2022 CRF450R top speed is 140km/hr. They are only 7km/hr quicker with 2 less hp, that would be the weight difference & the better intake/exhaust ports.