The engine was a liquid cooled single cylinder, four-stroke. A 50.0mm bore x 55.0mm stroke result in a displacement of just 108.0 cubic centimeters. Fuel was supplied via a single overhead cams (sohc).

The Elite 80 can be considered the little brother of the Helix. It retains the unmistakable design cues of the 80's, with a early-edgy line and lots of personal character. However, this scooter is aimed at riders in search of a small-displacement machine, but with some extra added power than what a 49cc engine can deliver.

Its small profile and slender build make the 2005 Elite 80 a very agile machine which cuts through the urban traffic with ease. Great for commuting, this scoot is also a nifty machine for urban errands. Add in rugged suspensions and a parking brake, dual lockable storage compartments and fun-to-ride automatic transmission for an even better ride. 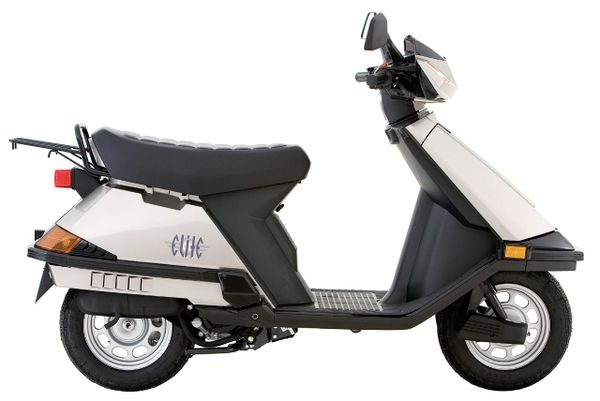 With an undeniable Helix-inspired design, the 2006 Honda Elite 80, retains the edgy, square attire which makes everything a matter of either love or hate rightaway. If scooters with a big displacement are not your thing, but you'd rather not ride a 49cc one, the Elite 80 might be a good choice.