Husaberg is a Swedish manufacturer of off-road and supermoto four-stroke motorcycles. Husaberg motorcycles are known for their larger displacement engines and for their race-oriented construction.

After the motorcycle section of the traditional Swedish brand Husqvarna was bought in 1987 by Italian company Cagiva, some of its engineers, led by Thomas Gustavsson, stayed in Sweden and founded Husaberg Motor AB in 1988.

The name Husaberg was only made official by Gustavsson when entering an enduro race at Skillingaryd, as he was forced to declare the make of his motorcycle.[1]

The Husaberg team tried to compensate for their lack of funds by their courage to rely on technical innovations and could never afford to hire established professional riders but rather ambitious rookies such as Joël Smets, Jimmie Eriksson, Walter Bartolini, Kent Karlsson, Anders Eriksson, Jaroslav Katrinak, and Peter Jansson.[2]

Good results on the tracks could not compensate for slow sales, and Husaberg eventually was purchased by the Austrian motorcycle manufacturer KTM in 1995.[3]

Husaberg's previous slogan, "Ready to Race" was adopted by KTM as its own. Husaberg's current slogan is now "4 Stroke Force."[3][6][7]

The earlier Husaberg engines (1989–1996) were known to have premature engine failures due to the fact that they do not have an oil pump and rely on oil delivery from the timing chain. The reliability and quality of the engines have improved over the years and, from 1997 on, have been comparable to that of more established brands.[8]

The current lineup includes enduro and supermoto models only. The motocross and cross-country (wide ratio gearing, no lighting kit) models have been discontinued. The model names are all composed of two letters: "F" as "Four-Stroke", then either "C" for the motocross, "E" for the enduro, "X" for the Cross-Country, or "S" for the supermoto models, followed by a number representing the engine displacement, then one last letter, either "E" for the electric-start, or "C" for the competition models (lacking kick stand, wiring harness or lights). Some older models were also listed with the number of gears: 4 or 6.

On November 6, 2007, at the International Motorcycle Exhibition in Milano, Husaberg unveiled a totally new design for the FE 450 E, announced as the 2009 model.[11] Apart from sporting new fairing, the new design will include a totally revamped engine, in a new position, rotated 180 degrees from top to bottom, and inclined forward at 70 degrees from vertical. The carburetor will be replaced by an EFI injection system and the chain drive will now be placed on the more standard left side. 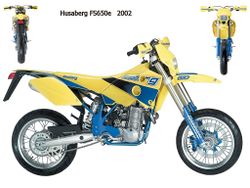 The model lineup for 2010 adds three new models to the program. All models are based on the chassis and engine that was introduced in 2009. The models[12] are:

For 2009 there are two enduro models available with the new revolutionary engine and a lot of other technical highlights: