The Husqvarna SM510R was a single cylinder, four-stroke Supermotard motorcycle produced by Husqvarna between 2005 and 2010.

The engine was a liquid cooled single cylinder, four-stroke. A 97.0mm bore x 67.8mm stroke result in a displacement of just 501.0 cubic centimeters. Fuel was supplied via a double overhead cams/twin cam (dohc).

The bike has a 6-speed transmission. Power was moderated via the wet, multiplate.

The 2006 MY Husqvarna SM 510 R is the bigger sibling in the Huskey supermoto family, sporting a liquid-cooled, four-stroke, 510cc, single cylinder engine mated to a six-speed manual transmission. It comes standard with a 45mm Marzocchi inverted telescopic fork and a Sachs progressive, hydraulically adjustable monoshock.

In addition, it has a high-end Brembo braking system, which makes for a more performance-oriented, but also safe, machine. Other features worth mentioning on this machine would be the wire-spoked wheels, which mean that, fitted with proper tires, it can be taken to light off-road tracks, also.

For supermotard fans that want a gritty and agile machine, the Swedish engineers from Husqvarna have launched the 2007 MY SM 510 R. At its heart lies a liquid-cooled, four-stroke, 510cc, single cylinder engine mated to a six-speed manual transmission. In addition it comes standard with a high-end suspension package, a performance-oriented Brembo braking system, and wire-spoked wheels which, if fitted with proper tires, means this machine can tackle even light off-road tracks.

Unlike its previous embodiments, the 2008 MY Husqvarna SM 510 R has received several upgrades, both in its performance and in its visuals, that is sure to make it one of the most sought after machines among Huskey fans, and not only. Bigger, 50mm Marzocchi upside down forks, a new progressive rear monoshock, as well as a nwe livery and race-derived graphics only improve this successful machine from the Swedish brand.

At its heart lies a liquid-cooled, four-stroke, 510cc, single cylinder engine paired to a six-speed manual transmission. For the more adventurous of riders, it comes with wire-spoked wheels, and, if fitter with proper tires, can even be enjoyed on light off-road tracks.

When it comes to gritty, agile and lightweight supermotards, it doesn't get much better than the 2009 MY Husqvarna SM 510 R. At its heart lies a liquid-cooled, four-stroke, 510cc, single cylinder engine mated to a six-speed manual transmission. It comes with a performance-oriented suspension package, composed of a 50 mm Marzocchi Upside-Down telescopic hydraulic fork with advanced axle, compression and rebound stroke adjustment and a 250 mm wheel travel, and a Progressive 'Soft Damp' type with single hydraulic shock absorber; spring preload adjustment, compression and rebound adjustment rear unit, which seriously increase its agility and comfort levels. In addition, the high-end Brembo braking system makes for a safe, yet performance-oriented machine, capable of putting a smile on even the most seasoned of riders. 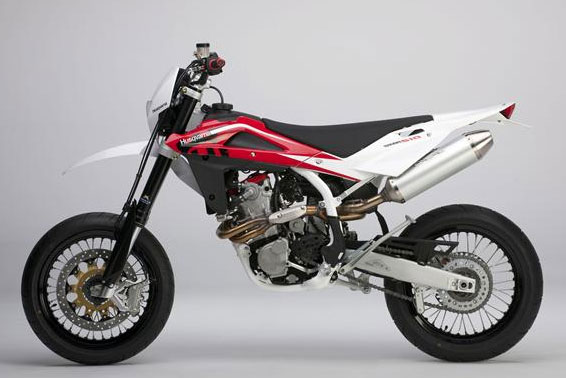 The 2010 MY Husqvarna SM 510 has been designed for riders who want a powerful, single cylinder supermotard that is also lightweight. At its heart lies a liquid-cooled, four-stroke, 501cc, single cylinder engine mated to a six-speed manual transmission. It has a score of race-derived parts and settings, inspired by the brand's vast experience in the world championship supermotard tracks. In addition, its plastics have a race-inspired graphic scheme that is sure to appeal to the more young among Huskey fans.

The 2011 MY Husqvarna SM 510 has received a number of new improvements, which not only increase its performance, but also make for a longer engine life, with less hassle from maintenance. Its liquid-cooled, four-stroke, 510cc, single cylinder lump has received new steel exhaust valves, as well as more powerful water pumps.

In addition, its frame has been redesigned to be more rigid, and, in the same time, even lighter, which significantly increase its desirability among Huskey fans, or among those on the market for a gritty, agile and lightweight supermotard.