The Kawasaki KFX50 was a single cylinder, four-stroke ATV produced by Kawasaki between 2009 and 2017.

The engine was a air cooled single cylinder, four-stroke. A 39.0mm bore x 41.4mm stroke result in a displacement of just 49.5 cubic centimeters. Fuel was supplied via a single overhead cams (sohc).

The bike has a automatic transmission. Power was moderated via the automatic.

It came with a 16/8-7 front tire and a 16/8-7 rear tire. Stopping was achieved via expanding brake (drum brake). dual in the front and a single disc. hydraulic. in the rear. The front suspension was a single a-arm with twin shock absorbers while the rear was equipped with a swingarm with single shock absorber. The KFX50 was fitted with a 1.5 Gallon (5.68 Liters) fuel tank. The bike weighed just 870.16 pounds (394.7 Kg). The wheelbase was 37.99 inches (965 mm) long. 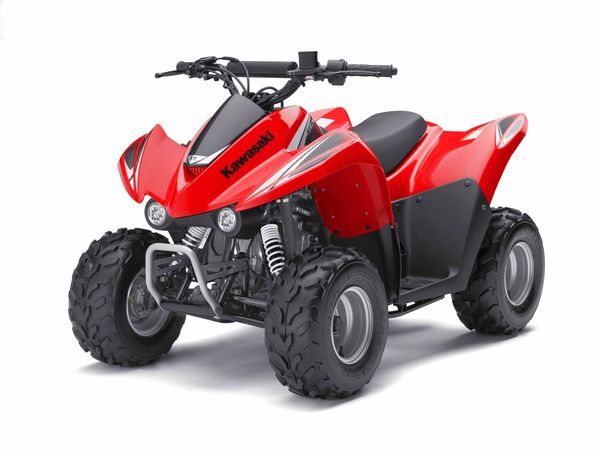 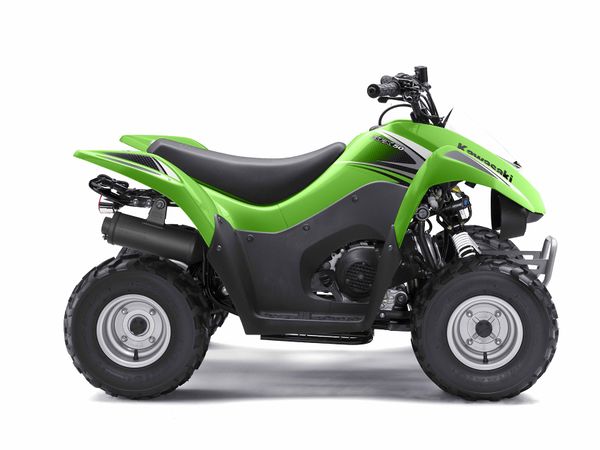 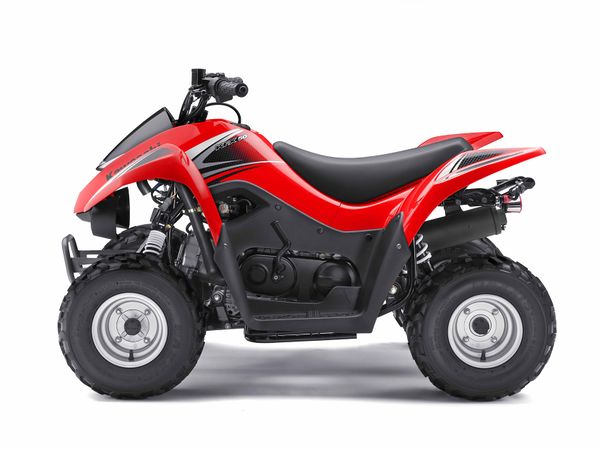 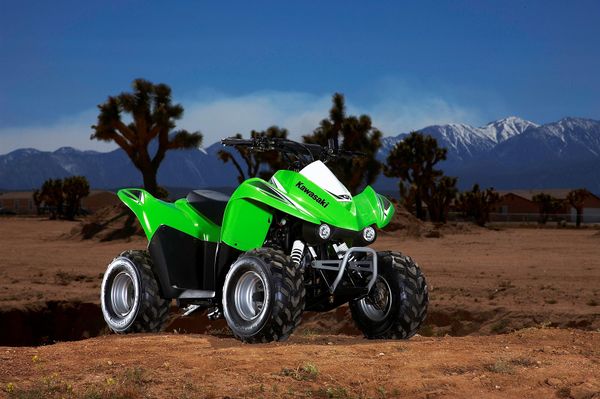 Engineered as a small-displacement, fun ATV for kids age 6 and up, the 2009 MY KFX 50 is loaded with safety features to give parents extra peace of mind. This small four-wheeler comes with an adjustable throttle stop, soeed limiter and CVT transmission, helping the youngsters build up confidence. And with keyed ignition, adults can rest assured nobody will be using the KFX 50 without their consent. 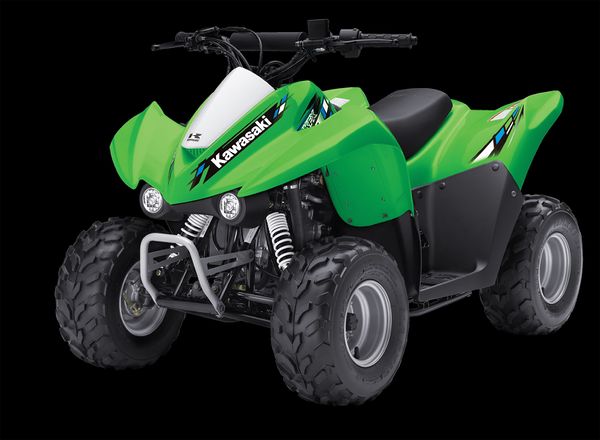 The 2013 MY Kawasaki KFX50 is a kid-sized ATV, suitable for riders aged six or older. It is a nifty choice for parents in search of a quad for their kids, especially because Kawasaki understands the safety requirements for early ages.

Parental controls are standard, such as the keyed ignition switch, the screw-type throttle limiter, and the ignition-cutoff tether. This last system allows an adult to immediately stop the engine with a pull of the tether line, potentially limiting the hazardous consequences.

All the while, the 49cc four-stroke single-cylinder engine mated to the continuously variable CVT make the ride intuitive and rewarding, offering youngsters a good chance to hone their ATV skills. 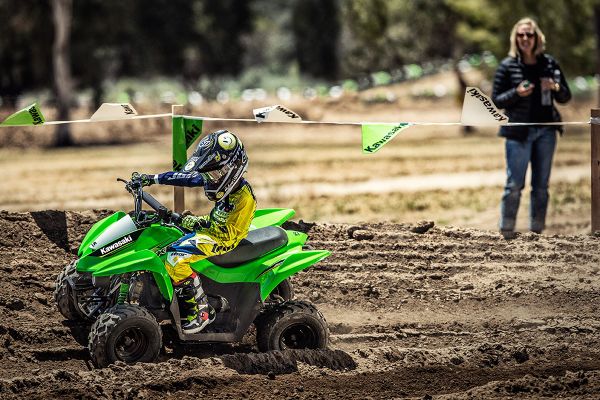 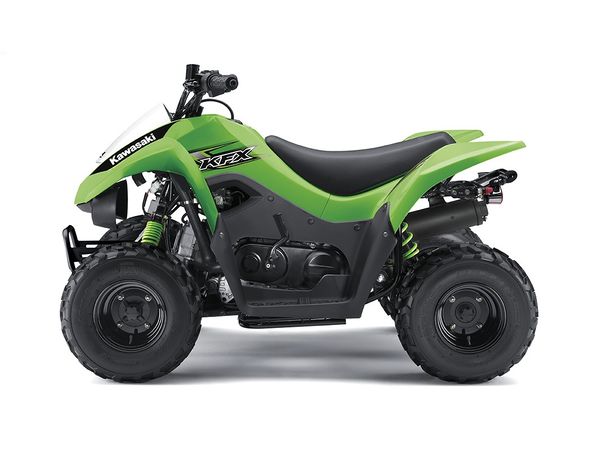 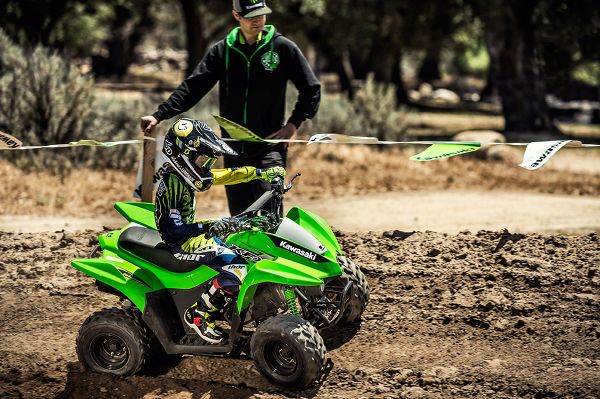 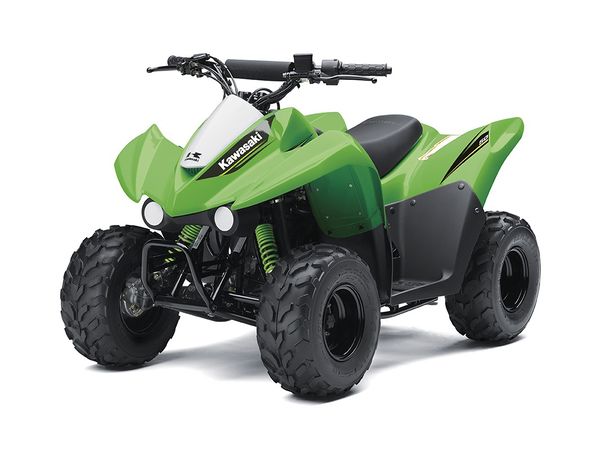 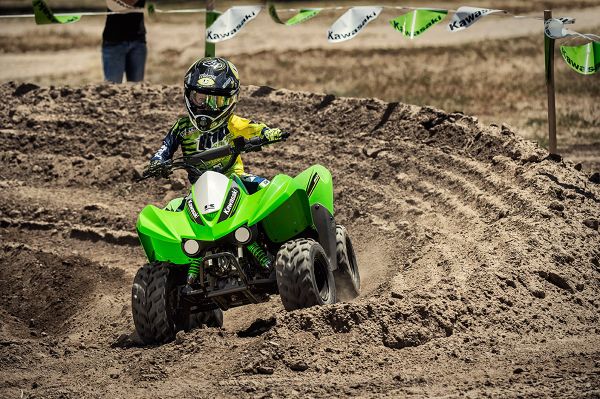 The KFX50 has all the features you need on a mini ATV, including electric start, a smooth CVT transmission that allows engine braking, two front drum brakes and a rear disc brake, which are activated by handlebar-mounted brake levers. It also features special controls including keyed ignition, throttle screw and CVT collar to help provide more control over vehicle usage and performance. The KFX50 is a fun, predictable vehicle designed with new riders in mind. With its sporty ATV looks including the distinctive Lime Green color scheme, full floorboards and wide, stable stance, the KFX50 makes for a great introduction into riding.