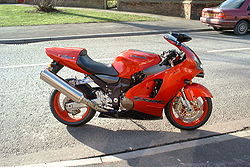 The ZX-12R is a sport motorbike manufactured by Kawasaki Motorcycles.

Kawasaki's flagship and answer to Suzuki's Hayabusa, the ZX-12R is a fuel injected (4 x 48 mm throttle bodies) 1200 cc hypersports Motorcycle generating 178 hp at standstill and 190 hp at 300 km/h by virtue of its very obvious ram-tube. Handling and braking match the effortless power of the engine resulting in a Motorcycle that is docile at low speeds and very easy to handle in heavy traffic but which has mind-numbing acceleration and a top speed in the region of 206.25 mph (330 km/h).

Starting with 2001 models, speed limiters were included to reduce the ZX-12R's top speed to 300 km/h . This was due to the fact that federal governments (mainly in Europe) were concerned with the Japanese high speed war, and told the manufacturers that they could voluntarily reduce the speed, or there would be a law limiting speeds. Japanese manufacturers implemented a gentlemen's agreement where a mutual agreement exists which stipulates that they do not manufacture motorcycles that can go faster than 299 km/h .